In what timeframe is W26 expected to go supernova?

All the news-articles say that it is expected to "eventually" explode. Which doesn't really tell me much. When is "eventually"? Also, considering this is the largest star in the known universe and 16k light-years away, will this be visible? Will it be dangerous?

There is little peer-reviewed information that gives a definitive time frame of when W26 would go supernova. The reason for this is that we have models of stellar lifecycles, and have found candidates at each 'age'.

With that in mind, according to a very recent article: The Ionized Nebula surrounding the Red Supergiant W26 in Westerlund 1 (Wright, 2013), (RSG = Red Super Giant)

The presence of the nebula suggests extensive mass loss in the recent history of W26. Its late spectral type, very high luminosity and spectral variability all suggest the star to be highly evolved amongst the RSGs. Both the star and the nebula are comparable to the RSGs VY CMa and WOH G64, both of which are highly luminous late-type RSGs with evidence for circumstellar gas. W26 provides a rare opportunity to directly investigate an extreme mass-loss event from a highly evolved RSG.

Looking at the compared stars to W26 to see what theories, even timeframes are suggested:

According to the article Fundamental properties and atmospheric structure of the red supergiant VY CMa based on VLTI/AMBER spectro-interferometry (Wittkowski et al. 2012), the supergiant star VY CMa is

close to the Hayashi limit of recent evolutionary tracks of initial mass 25 M⊙ with rotation or 32 M⊙ without rotation, shortly before evolving blueward in the HR-diagram.

So, according to Wittkowski et al. rather than being close to supernova, could well be close to entering the next phase of stellar evolution.

According to the article Rd Supergiants in the Local Group (Levesque 2013) and Spatially resolved dusty torus toward the red supergiant WOH G64 in the Large Magellanic Cloud (Ohnaka et al. 2008), studies of WOH G64

implies that this object may be experiencing unstable, violent mass loss.

TL:DR So, based on observations of W26 and comparable stars, there is no definitive timeframe, primarily due to these stars being close to the Hayashi forbidden region, which, according to the article Late-Type Red Supergiants: Too Cool for the Magellanic Clouds? (Levesque et al. 2007), results in them being

unstable hydrodynamically, which we expect to lead to this variability and behavior.

The Hayashi track/forbidden zones in relation to stellar masses and main sequence is shown below: 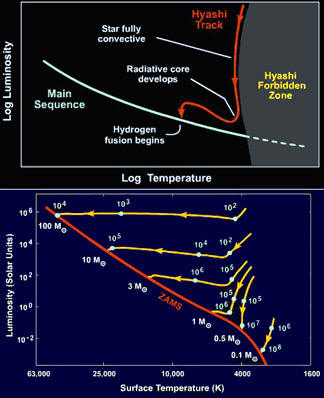 to which Levesque et al. state

Further monitoring of these stars, both photometrically and spectroscopically, may lead to an improved understanding of this phase of massive star evolution.

Suggesting that this behaviour may be a phase (albeit one of the final phases) in their evolution. Also, at that distance, it is likely to put on a small light show, but not pose much danger to the Earth (except in the very unlikely event of a gamma ray burst).

Not the answer you're looking for? Browse other questions tagged supernova or ask your own question.

14
How will the recent appearance of a supernova, the closest in 27 years, help reduce the uncertainties in our measurements of dark energy?
4
How massive does a main sequence star need to be to go type 1 supernova?
3
What exactly is it that is being magnified 50 times in this gravitational lensing observation?
2
Astrophysics of Supernovae - Energy over Distance?
6
Proxima as Supernova
9
Will the nebula of Betelgeuse be visible to the naked eye? How bright, how large, how soon, for how long?
2
At what distance could a supernova damage the Earth's ozone layer?
1
Why is so much energy released in a supernova while so little in a star?
4
How does pair production cause a pair-instability supernova instead of leading to the formation of a black hole?
4
How can we know if a star which is visible in our night sky goes supernova?