Loss of atmosphere on Mars

If the atmosphere on Mars was once much thicker, how was it likely lost? Was it due to interaction with the solar wind, the small size of the planet, both, or something else, and approximately how long did it take to reach its current thickness?

The loss of the Martian atmosphere can be mostly attributed to its mass. The reason why Earth still has an atmosphere made of lighter elements is because with larger mass comes larger escape velocity, which is the speed at which an atom's kinetic energy overcomes the gravitational potential energy of its planet.

The distribution of speeds of most gasses can be described by the Maxwell–Boltzmann distribution. 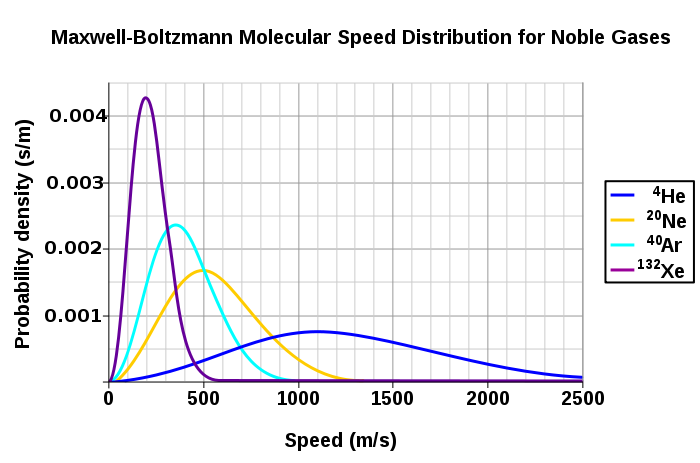 This curve represents the probability of finding a particle with a given speed at a given temperature. Holding temperature constant, the above chart illustrates that lighter molecules will have higher probabilities of being found with higher speeds. $$P(\epsilon) = \frac{2}{\sqrt{\pi}k_{B}T} \left( \frac{\epsilon}{k_{B}T} \right)^{1/2} \exp{-\left(\frac{\epsilon}{k_{B}T}\right)} $$ where $\epsilon$ is the energy of the particle, $\frac{p^{2}}{2m}$ in the absence of a gravitational field (see this lecture for information regarding how to include the gravitational term).

Integrated over time, the lighter gasses tend to exceed the escape velocity more often than their heavier counterparts. This is why the larger planets like Jupiter and Saturn still have atmospheres dominated by hydrogen and helium.

Not the answer you're looking for? Browse other questions tagged planetary-atmosphere mars or ask your own question.

3
How do solar winds affect the atmospheric composition and density of planets?

10
Why is Mars considered the outer edge of the “goldilocks zone”?
4
Does liquid water on Mars means life?
15
If we found evidence of life on Mars, how would we know that it originated on Mars rather than Earth?
21
How did Mars come to have a 24 hour 39 minute day?
2
Mars and 115 mm - which eyepieces?
1
What are the real conditions for the creation of an atmosphere/loss of an existing atmosphere?
2
Does Jupiter lose some atmosphere at all?
2
Could Mars have oil?
2
What if the atmosphere of Titan were like the one on Venus?
5
Is the Object in this Photo Mars?