Sources of Turbulence in the ISM

What sources of turbulence exist within the Interstellar medium (ISM)? Which ones are physically the most important for newly forming stellar systems?

There are numerous sources of turbulence in the interstellar medium, at all scales:

Therefore, one could then regards separatly three processes related to massive stars:

They are all relevant to star formation, one way or another. One key property of turbulence is to cascade from large to small scales; therefore, even if you inject turbulence at large scales (galactic scale) you'll get turbulent motions down to the scale of a molecular cloud.

A nice illustration of the tubulent cascade is the Larson's relation (Larson 1981): 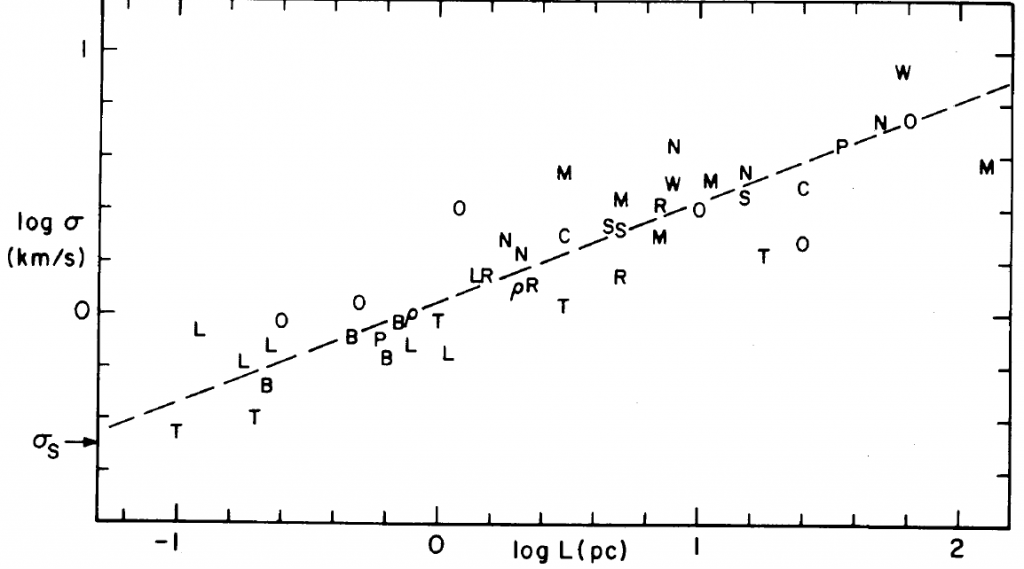 The Larson's relation shows the evolution of the velocity dispersion with the size of the structure you're looking at. Velocity dispersion is an indicator of turbulence. Indeed, these dispersions are non-thermal: knowing the typical temperature of the MIS (about 10 K), one can estimate the thermal velocity of, for example, the CO molecule ($v_th = \sqrt{2kT/\mu m_H}$, with $k$ the Boltzman constant, $T$ the temperature, $\mu$ the mean molecular wright and $m_H$ the hydrodgen atom mass) that is about 0.07 km s$^{-1}$. Measured velocity dispersions are of the order of 1 to 10 km s$^{-1}$, and these is interpreted as a turbulence signature (and estimate).

Energy rates: values are given (roughly) for the Milky Way

Not the answer you're looking for? Browse other questions tagged star-systems interstellar-medium turbulence or ask your own question.

16
How does interstellar matter density vary?
5
What is the distribution of organic compounds in the Milky Way Galaxy?
6
Does the sun blow a bubble into the interstellar medium?
4
Metals and dust locked into planets
4
Why do these astronomers say that “Carbon chains with more than nine atoms are unstable”?
9
Gravitational waves and gamma ray burst: how were the error bars determined for this speed of gravity calculation? Was $H_0$ used?
5
Interstellar Dust properties
0
Why is space-based VLBI scattering sub-structure “Hopefully, a new promising tool to reconstruct the true image of observed background target(s)”?