How does neutron star collapse into black hole?

We know the spectacular explosions of supernovae, that when heavy enough, form black holes. The explosive emission of both electromagnetic radiation and massive amounts of matter is clearly observable and studied quite thoroughly. If the star was massive enough, the remnant will be a black hole. If it wasn't massive enough, it will be a neutron star.

Now there's another mode of creation of black holes: the neutron star captures enough matter, or two neutron stars collide, and their combined mass creates enough gravity force to cause another collapse - into a black hole.

What effects are associated with this? Is there an explosive release of some kind of radiation or particles? Is it observable? What physical processes occur in the neutrons as they are subjected to the critical increase of pressure? What is the mass of the new black hole, comparing to its neutron star of origin?

A neutron star must have a minimum mass of at least 1.4x solar masses (that is, 1.4x mass of our Sun) in order to become a neutron star in the first place. See Chandrasekhar limit on wikipedia for details.

A neutron star is formed during a supernova, an explosion of a star that is at least 8 solar masses.

The maximum mass of a neutron star is 3 solar masses. If it gets more massive than that, then it will collapse into a quark star, and then into a black hole.

During a supernova, most of the stellar mass is blown off into space, forming elements heavier than iron which cannot be generated through stellar nucleosynthesis, because beyond iron, the star requires more energy to fuse the atoms than it gets back.

During the supernova collapse, the atoms in the core break up into electrons, protons and neutrons.

In the case that the supernova results in a neutron star core, the electrons and protons in the core are merged to become neutrons, so the newly born 20-km-diameter neutron star containing between 1.4 and 3 solar masses is like a giant atomic nucleus containing only neutrons.

If the neutron star's mass is then increased, neutrons become degenerate, breaking up into their constituent quarks, thus the star becomes a quark star; a further increase in mass results in a black hole.

The upper/lower mass limit for a quark star is not known (or at least I couldn't find it), in any case, it is a narrow band around 3 solar masses, which is the minimum stable mass of a black hole.

What we would see visually during the transformation would be a hard radiation flash. This is because during the collapse, the particles on/near the surface have time to emit hard radiation as they break up before going into the event horizon; so this could be one of the causes of gamma ray bursts (GRBs).

We know that atoms break up into protons, neutrons, electrons under pressure.

Under more pressure, protons and electrons combine into neutrons.

Under even more pressure, neutrons break down into quarks.

Ultimately the smallest particle is a string: open or closed loop, and has a Planck length, which is many orders of magnitude smaller than a quark. if a string is magnified so it is 1 millimeter in length, then a proton would have a diameter that would fit snugly between the Sun and Epsilon Eridani, 10.5 light years away; that's how big a proton is compared to a string, so you can imagine there are perhaps quite a few intermediate things between quarks and strings.

Currently it looks like several more decades will be needed to figure out all the math in string theory, and if there is anything smaller than strings then a new theory will be required, but so far string theory looks good; see the book Elegant Universe by Brian Greene.

A string is pure energy and Einstein said mass is just a form of energy, so the collapse into a black hole really breaks down the structure of energy that gives the appearance of mass/matter/baryonic particles, and leaves the mass in its most simple form, open or closed strings, that is, pure energy bound by gravity.

We know that black holes (which are not really holes or singularities, as they do have mass, radius, rotation, charge and hence density, which varies with radius) can evaporate, giving up their entire mass in the form of radiation, thus proving they are actually energy. Evaporation of a black hole occurs if its mass is below the minimum mass of a stable black hole, which is 3 solar masses; the Schwarzschild radius equation even tells you what the radius of a black hole is given its mass, and vice versa.

So you could transform anything you want, such as your pencil, into a black hole if you wanted to, and could compress it into the required size for it to become a black hole; it is just that it would immediately transform itself (evaporate) completely into a flash of hard radiation, because a pencil is less than the stable black hole mass (3 solar masses).

This is why the CERN experiment could never have created a black hole to swallow the Earth - a subatomic black hole, even one with the mass of the entire Earth, or the Sun, would evaporate before swallowing anything; there is not enough mass in our solar system to make a stable (3 solar mass) black hole.

A simple way for a neutron star to become more massive in order to be able to turn into a black hole is to be part of a binary system, where it is close enough to another star that the neutron star and its binary pair orbit each other, and the neutron star siphons off gas from the other star, thus gaining mass. 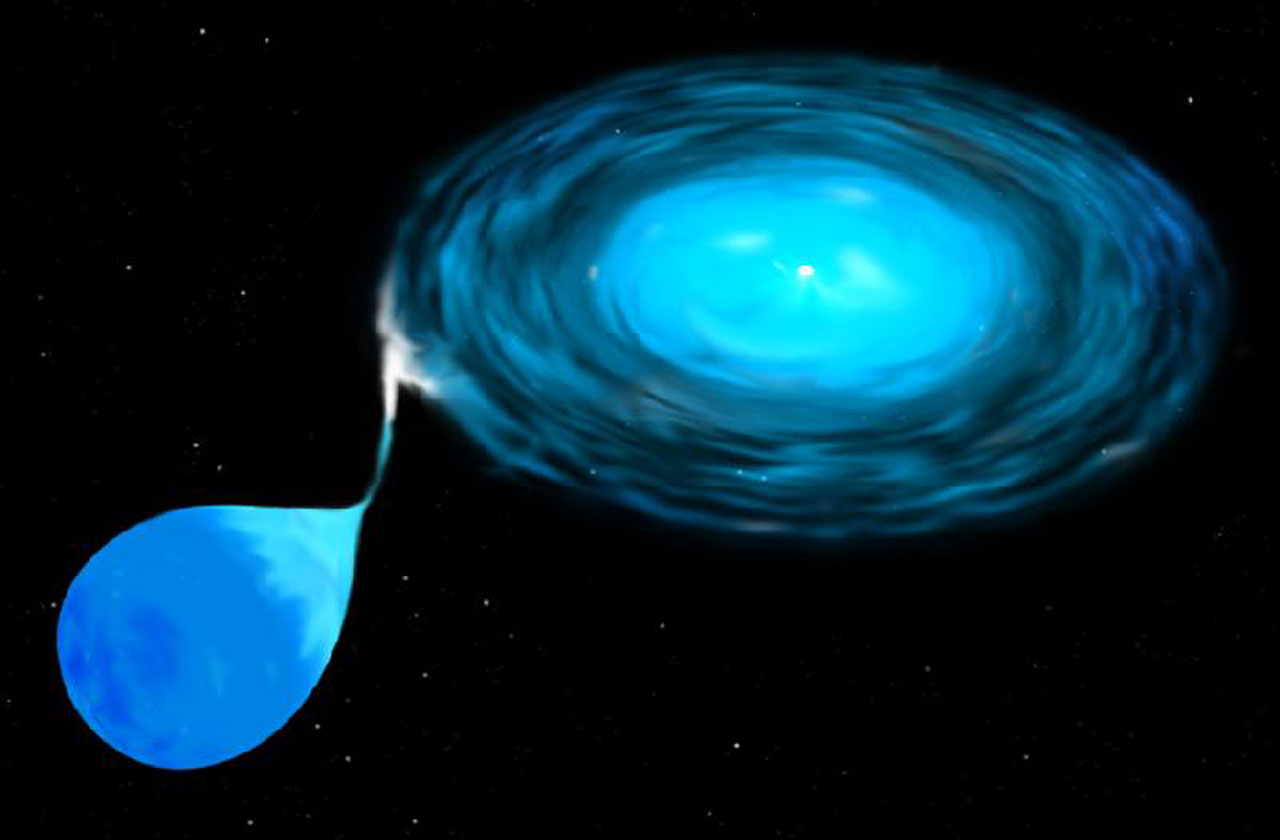 Here is a nice drawing showing exactly that.

Matter falling into a black hole is accelerated toward light speed. As it is accelerated, the matter breaks down into subatomic particles and hard radiation, that is, X-rays and gamma rays. A black hole itself is not visible, but the light from infalling matter that is accelerated and broken up into particles is visible. Black holes can also cause a gravitational lens effect on the light of background stars/galaxies.

Just to focus on one part of your question. Whilst it might be possible for a neutron star to accrete material, or for two neutrons stars to collide, in order to form black holes, this kind of event must be quite rare (although see below)

The distribution of measured neutrons star and black holes masses can be fitted with an estimated true distribution. Here it is, from Ozel et al. (2012). You can see there is a distinct gap between the highest mass neutron stars (currently the record holder has a mass of about $2M_{\odot}$ and the smallest black holes (about $5M_{\odot}$). This confirmed slightly earlier work by Farr et al. (2011). 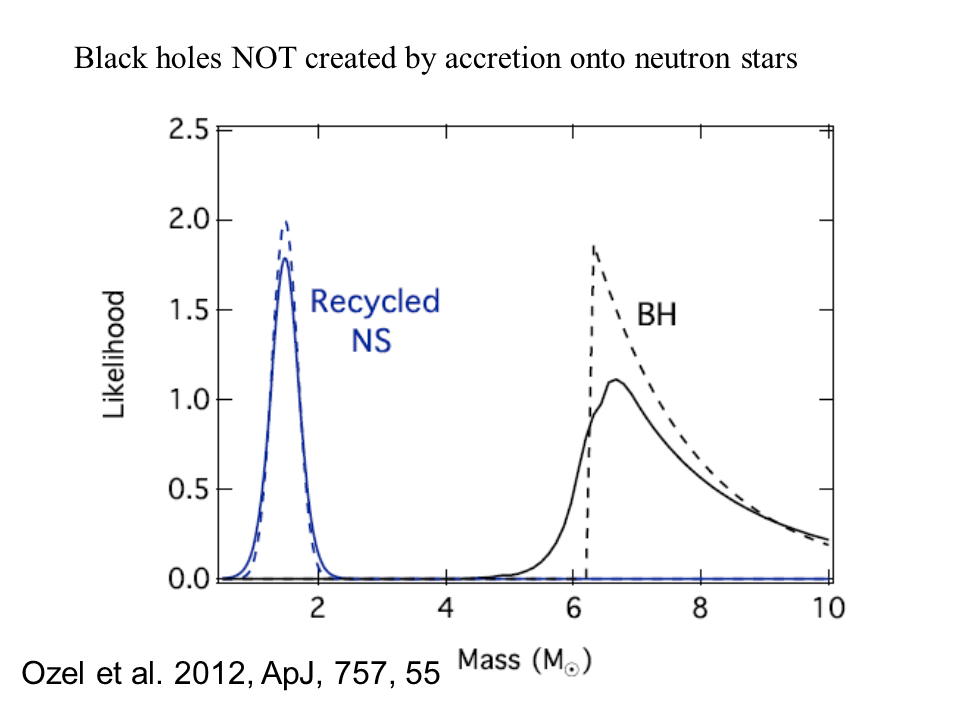 The merging of neutron stars must happen though. The obvious example is the Hulse-Taylor binary neutron star system, where the two object are spiralling together, presumably by the emission of gravitational waves, and will merge in about 300 million years. The combined mass of the 2 neutron stars is $2.83M_{\odot}$, but the mass of any black hole they create would be lower, with the difference radiated away as neutrinos and gravitational waves.

Merging neutron stars (or merging neutron star + black hole binaries) are thought to be the progenitors of short duration gamma ray bursts or so-called Kilonova eventsthat are generally seen in high redshift galaxies. These typically last a second or less, but involve an energy release of about $\sim 10^{44}$ J. They may produce a black hole, or perhaps a more massive neutron star. There will also be a gravitational wave signature (a "chirp") that could be detected by the next generation of gravitational wave experiments (now a reality). These black holes may be isolated and hence not represented in the mass distribution above. A further observational signature of these events may be in the form of the current levels of a number of heavy r-process elements, like Iridium and Gold, that may mostly be produced in these events.

As for accretion onto an existing neutron star - well it looks quite rare because there may be a large gap between the highest masses at which neutron stars are produced in supernovae (maybe $1.5M_{\odot}$) and the maximum mass of a neutron star. We know that the latter is at least $2M_{\odot}$, but it could be higher, perhaps $3M_{\odot}$, the maximum allowed by General Relativity. As to the outcome of this hypothetical event, well sticking to non-speculative physics, the most likely thing to happen would be the production of massive hyperons in the neutron star core at sufficiently high densities ($>10^{18}$ kg/m$^3$), which would lead to an instability (due to the removal of degenerate neutrons that are providing the majority of support); the neutron star may then slip inside its event horizon (about 6km for a $2M_{\odot}$ neutron star) and become a black hole. Some sort of explosion seems unlikely, though a gravitational wave signature might be possible.

EDIT: An update on the NS/BH mass distribution above. I saw a talk recently at a conference - the explanation of the distribution has two broad thrusts; either the black holes are not produced in this mass range because of the physics of the progenitors, or there is a strong observational bias against seeing them. An example of the former explanation can be found in Kochanek (2014), who proposes that there is a class of "failed supernovae" between 16 and 25$M_{\odot}$ that do manage to eject their envelopes in weak transient events, but leave behind their helium cores to form the lowest mass 5-8$M_{\odot}$ black holes. Lower mass progenitors are then responsible for the neutron stars.

The observational bias is that the companions to the lowest mass black holes in binary systems may be always overflowing their Roche lobes. The resultant accretion signature swamps the companion spectrum and prevents a dynamical mass estimate (e.g. Fryer 1999). The Chandra Galactic Bulge Survey is attempting to find examples of quiescent, relatively low X-ray luminosity, eclipsing compact binaries, with which to measure a more unbiased black hole mass distribution.

Further Edit: There continue to be challenges and claims that there are "low-mass" black holes that could be formed via accretion-induced collapse of a neutron star (pointed out by Alexandra Veledina). For instance Cygnus-X3 has a claimed mass of $2.4^{+2.1}_{-1.1}\ M_{\odot}$ according to Zdziarski et al. 2013, but these observations lack the precision to be really sure yet.

A compact object has now been found with a precise mass measurement between $2.5-2.67 M_{\odot}$. It was detected through a gravitational wave signature during its merger with a much more massive black hole. This object was either the most massive neutron star found yet, or the least massive black hole (Abbott et al. 2020).

Not the answer you're looking for? Browse other questions tagged black-hole neutron-star astrophysics or ask your own question.

6
How could a neutron star collapse into a black hole?
0
What is the "hypothesized lower mass gap" between 2.5 and 5 solar masses?