How much of an effect does the moon have on Earth's liquid mantle?

The gravitational pull of the moon is enough to create tidal forces of large bodies of liquid, i.e the sea.

I was having a conversation the other day about how to terraform Mars, and someone suggested that if Mars was to have a moon artificially placed there then its gravitational effects would help keep a liquid core flowing.

Does the moon therefore also have an effect on other large bodies of liquid on Earth? Does the moons gravitational pull affect in any way the flow of Earths liquid mantle?

Interesting question. I would say from an energy standpoint, it almost certainly it has no effect.

Of course, the extreme case is Io, one of the Galilean moons whose heat source comes from the gravitational tidal stretching as it orbits very closely to the planet Jupiter. The heat that sustains the core of the Earth, however, is left over from its formation and also comes from radioactive decay of heavy elements.

The differential potential energy (and hence the tidal force) over the planet Io due to Jupiter, which is approximately 1300 times more massive than the Earth, is much larger than that of the Earth due to the moon. The relationship between force and differential potential energy is: $$ F = - \nabla U $$ At a given location on the potential energy curve, the strength of the force is determined by its steepness (derivative) at that same location. Below is a quick plot I've generated for the Earth-Moon system, where the vertical red line represents the average Earth-Moon distance over a one-year period. As you can see it doesn't appear to be very 'steep', though keep the scales of the x- and y-axes in mind. 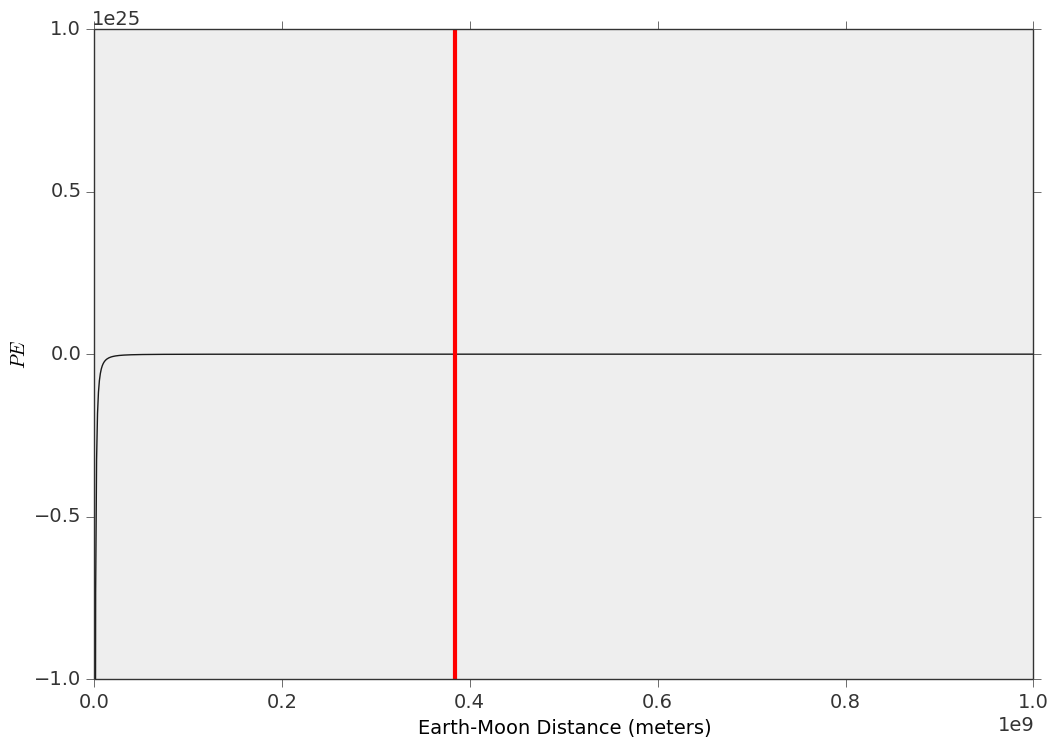 Admittedly this isn't that exciting of a plot. But, for comparison one could be made for the Jupiter-Io system, and numerical derivatives could be taken for both to calculate the magnitude of the tidal force in each situation.

To answer the question:

17
How was Io not torn apart by tidal forces during its formation?
2
Configuration required to tidally heat Earth-like rogue planet
1
Does more ocean on an Earth analog produce a different rotation period?
9
Can Earth host another natural satellite than the Moon?
8
Eventual outcome of tidal acceleration and deceleration
6
Do tides occur on planets like Neptune, having water?
2
Scholarly work on the gravitational disruption of a rocky planet by a close pass with another planet?