Timescale of ignition of a protostar?

What is the timescale of start of nuclear fusion as T Tauri type star transforms into a Main Sequence star?

Their central temperatures are too low for hydrogen fusion. Instead, they are powered by gravitational energy released as the stars contract, while moving towards the main sequence, which they reach after about 100 million years.

The mentioned 100 million years is the period of the star being in its stable (well, as stable as the turbulent T Tauri type stars get) state without nuclear fusion. Then, once the fusion starts, we get between 3 million and hundreds of billions years of main sequence, depending on mass of the resulting star.

I imagine this period could be quite short, and the effect quite rapid and turbulent as the initial fusion increases local temperature (and as result pressure) drastically, leading to conditions conductive for fusion spreading rapidly over the volume which is already on brink of entering the fusion everywhere within the protostar, essentially a nuclear wildfire encompassing the gathered gas, a chain reaction starting.

Am I right in my guess this process is rather rapid? Was it ever observed? Or contrary, does the intensity of the fusion reaction rise gradually and slowly from zero over many millions years of star formation?

I have mulled over this a couple of times (it's a really interesting question!), and hopefully come up with a somewhat enlightening answer. I haven't been able to find a good, modern reference for these details (perhaps I just suck at literature searches...) so there's a little mucking around in the history books

The total timescale of evolution onto the main sequence for a protostar in the T Tauri mass range ( < 3 solar masses) is on the order (of magnitude) of several tens of millions of years. The ignition of fusion is not precisely a "runaway" reaction: however it occurs relatively quickly and once it starts, gravitational contraction quickly ceases.

The evolution of a 1 solar mass protostar follows these basic steps. Things are a little different for different masses - too complicated to explain here but the references should provide ample further reading!

Figure: the The Lg/L curve describes the amount of energy gained from gravitational contraction over the total luminosity of the star. The logarithmic time axis is in seconds (reproduced from Iben (1965), Figure 3). 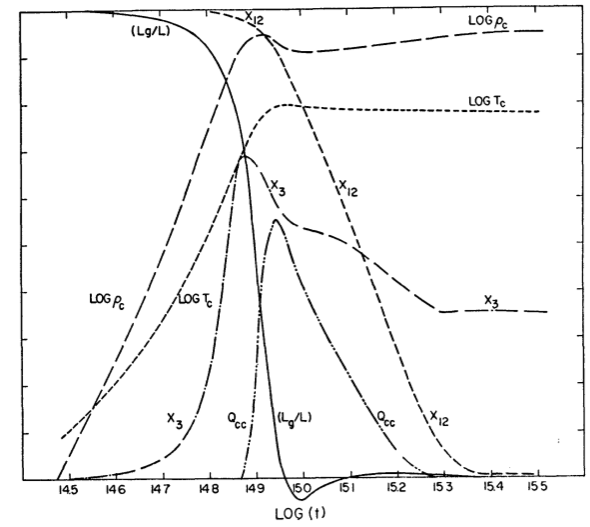 Not the answer you're looking for? Browse other questions tagged astrophysics main-sequence protostar t-tauri-stars .

4
Do stars come on like LEDs or wick lamps?
4
Do large stars ignite then continue to increase in size, or do they ignite only once they grow larger?