What happens if gravity shuts down for only one second? [closed]

What would happen if gravity completely stopped for 1 second?

I expect stars would belch mightily, neutron stars and black holes would explode.

Stars are only held at their steady state size by the opposed forces of gravity and radiation, so eliminating gravity for 1 second will cause expansion, followed by collapse as gravity kicks in again. A Neutron star's compactness gives it a surface gravity of up to 7×10^12 m/s², and expanding from 20km to ~70 billion km (or 300000km when c limit is considered) over the course of 1 second constitutes an explosion. Black holes tend to have higher gravity values at the event horizon (same ref) so the result would be even more cataclysmic.

Nothing much. If it is only for one second, then depending on where you are on Earth you would start floating for one second going up somewhat (but not very much).

If you are on the equator you will have a velocity (parallel to the Earth's rotation) of about 465m/s. In that second the Earth will have rotated 0.004°. This means that you will have increased your elevation above the surface by $$465 \times \sin 0.004 = 0.034\textrm{m}$$ i.e. about 3cm. Some objects will probably break when the gravity is back on and they fall back to the surface. Some people will probably get sick because of the sudden weightlessness.

The orbits of the planets will change a tiny bit and our theories in celestial mechanics may need some minor changes.

For larger structures like stars, and galaxies, the perturbations will not be noticeable as 1 second is much too short a time scale.

Immediate expansion. I would like to break it down into a steps starting with smaller magnitude and growing larger as we go. However, a few assumptions must be made for this to make sense (since your question does break the laws of physics): Since gravity is mass-dependent in the equation F=GMm/r^(2) we are not assuming that everything suddenly has no mass (and therefore no energy) as the origin of the lack of gravity. We are only putting at rest the force between the two masses that would have originally interacted. You can think of it as neutralizing two opposing charged objects so that they neither attract nor repel, however they are still present as objects.

As humans on the surface of the Earth we stand approximately 6371 kilometers or 3958 miles above the center of the Earth. Even as you're standing still reading these words from your computer or electronic device you are rotating around the Earth at about 1000 kph or 620 mph since we travel a circumference of 2*Pi*radius units of distance per 24 hours. In addition to flying off of Earth faster than sound (with respect to a stationary point - our Sun) the Earth itself would be flung off of the orbit of the sun just as we were tossed from the Earth. The sun itself would additionally be tossed from the orbit around the milky way. The calculated speed of the Earth around the sun (using the same method as before) is 108 000 kph or 67 000 mph. The speed of the sun around the Milky Way is 486 000 mph or 780 000 kph. If the vector components of a person or object on Earth were to be aligned in the right way with the Earth, the Earth the right way with the Sun and the Sun the right way with the Milky Way a person or object on Earth could be ejected into intergalactic space at a speed of 890 000 kph or 550 000 mph which is equivalent to 245 kilometers or 150 miles per SECOND with respect to the center of the Milky Way. If gravity didn't come back after 1 second that would be the fate of objects. However anticlimactically, since gravity returns after 1 second, the height elevation change would range from very minimal to exactly zero depending on your position on the Earth. That is just the release of kinetic energy from the universes gravitational grasp and keep in mind that this is happening to every atom of every object in the universe both larger and smaller than our Sun.

The fact that gravity allows kinetic energy to be maintained while gaining potential energy is also a troublesome violation of thermodynamics.

Stars in our universe maintain a balance between the extreme outwards force of thermonuclear explosions and the immense gravity to arrive at it's given radius (our Sun's is 695 800 km and has a mass of 1.989x10^30 kg (1989 with 27 zeros after)). When gravity disappears for 1 second the outwards force balanced by the gravity would be released causing a massive explosion. In other star systems with more immense stars and natural phenomena such as pulsars and and especially black holes the explosions and expansions would be greater. The subject of a black hole is a very interesting one indeed.

Without going into the physics behind a black hole it is obvious that the super-massive black holes would possess the most barbaric explosions as they are so heavy light cannot escape. This release of energy would be unparalleled. Even though the release would be for only one second the decrease in density of the black whole from the rapid expansion might not be able to wield in the ejected mass from the explosion.

Or, with respect to outside the black hole it would cause the carefully balanced orbits of planets to be slightly stretched from and to ellipses which could possibly cause Earth to get hit by another planet from our or other solar systems (keep in mind the countless asteroids present in the belt between Mars and Jupiter though for one second this is a small chance).

There is no definitive answer on what would truly happen. Without gravity every theory would essentially be destroyed. Every answer I have given to your question has to of had an assumption in order to give an idea of what is going on because if there truly was no gravity, if space-time was truly uniform for every cubic angstrom of our universe for one second the only possible explanation would be that there is no mass. If there is no mass then there is no energy as described by Einstein's e=mc^(2). As we know it, nothing would exist at all.

Gravity is force that comes from one object pulling on another object. This causes a rotation around a center of masses. In a case of the sun pulling the earth, the center of mass is on the sun's surface and thus the earth rotates around the sun. The force pulling the earth towards the center of mass between the sun and earth is called a centripetal force or the gravitation pull of the sun. The centripetal force cause the change in direction towards the center of the mass. The rate at which the sun changes, angular velocity is constant. The tangential velocity is also constant because the tangential acceleration is zero. The only thing changing is the direction. This principle applies to all objects pulling on each other.

In case the gravitation going off and on for a second, I would expect that the centripetal force would go to zero and then back to normal on all the objects in the universe. The consequence of this on and off would mean that all the objects in the universe would not have an angular rate and so will move in the direction and rate of the tangential velocity at the initial moment of the gravity switching off. Once the gravity return, the objects will start pulling on each other and thus will have to establish new center of masses and might restore or create new couples of rotations. 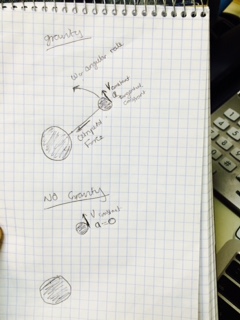 Not the answer you're looking for? Browse other questions tagged gravity or ask your own question.

3
What is gravity really?
5
From what distance can one object influence gravity of another object?
3
Does gravity bend light, and how much time does it take for light to cross gravity of a Black Hole?
2
What causes the Earth to have gravity?
6
Have more recent LIGO/VIRGO gravitational wave measurements narrowed down the speed of gravity further?
2
Was there a formula-first hypothesis for gravity?