What might cause a planet to have a significant tilt in their orbit?

Most of the planets in our solar system all orbit along the same plane, supposedly because of the almost flat dust clouds that formed the planets.

But some planets, such as the one featured below, have a significant tilt in their orbits that separates them from the normal plane of orbit for that star. 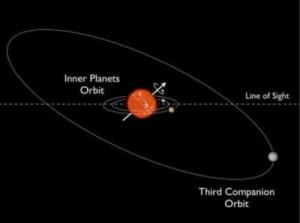 What might cause a planet to have such a tilt? Is this the star capturing a wandering body into orbit or is this a phenomena caused by the formation of these systems?

Orbital tilts are almost certainly an effect of the formation and evolution of the protoplanetary disk (at least in the majority of cases). They could also be captured rogue planets.

Consider the eccentricity of Pluto. Like Pluto's eccentric orbit, it's probable that its current inclination is the result of orbital resonances with Neptune. This paper (unpublished grad student research) describes some such scenarios.

It is likely these resonances are between the Jupiter-induced precession frequencies of the ascending nodes of Pluto and Neptune. Pluto's inclination could either be relatively stable now, or it may still oscillate on the timescale of several million years.

I wish I could give a more definitive and detailed explanation - it's just one of these cases where no one knows for sure.

4
Would Venus have any significant effects on Earth if its orbit were entirely within the habitable zone?
5
Can orbital migration cause a planet to crash into the sun?
3
What is the axial tilt of a planet measured relative to?
9
Why do Uranus' and Pluto's moons orbit the equator? What makes a moons' inclination tilt with the rotational axis of their planet?
2
Planet orbit circumbinary planet
11
How many satellites orbit their planet faster than the planet rotates?