Viewing a solar eclipse through a leafy tree 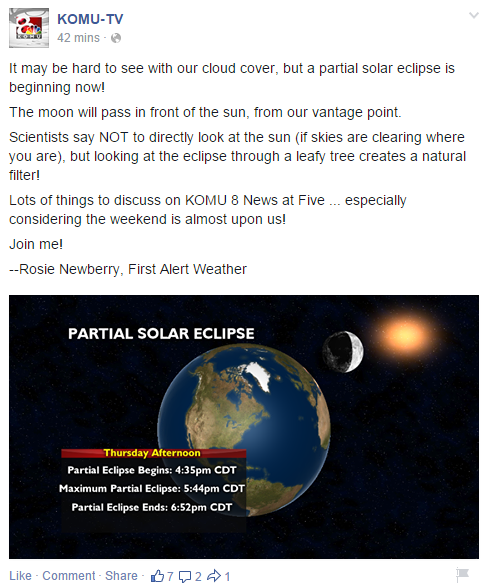 Note the line about using a leafy tree as a filter:

Scientists say NOT to directly look at the sun (if skies are clearing where you are), but looking at the eclipse through a leafy tree creates a natural filter!

I suspect that they have misunderstood the projection method (or inadequately explained), and their advice is not only wrong, but potentially dangerous.

Is this method recommendable? Should it be considered dangerous?

Almost immediately upon having seen the posting I had commented on it noting my belief that such advice could be dangerous, including a more clear explanation of how viewing using trees should be done. The staff member who originally posted the status later took note of this and edited the status to less ambiguously explain viewing the projection. Unfortunately, this was done after the solar eclipse had concluded. Hopefully no damage was done.

It seems that the station has, in fact, given out extremely dangerous advice - simply because it was poorly phrased.

Viewing a solar eclipse is incredibly dangerous - mostly under circumstances where you're looking towards the Sun. As Wikipedia warns,

Looking directly at the photosphere of the Sun (the bright disk of the Sun itself), even for just a few seconds, can cause permanent damage to the retina of the eye, because of the intense visible and invisible radiation that the photosphere emits. This damage can result in impairment of vision, up to and including blindness.

You couldn't pay me enough to so much as face toward the Sun and look at my feet and attempt to view a solar eclipse out of the corner of my eye!

There are safe ways to view an eclipse, the most common being using a pinhole camera to indirectly view the eclipse. Not only are you not looking directly at the Sun, but you can actually turn away and look at the projection.

But here's where I think the station messed up. According to CNN,

Or let a tree do the work for you. "Overlapping leaves create a myriad of natural little pinhole cameras, each one casting an image of the crescent-sun onto the ground beneath the canopy," NASA says.

So NASA actually advocates using the leaves as a pinhole and using indirect viewing methods - i.e. looking anywhere but the Sun - as opposed to watching the eclipse through the leaves.

8
Is stacking welder's glasses a safe way to watch at the eclipse?
3
Why solar eclipse paths are symmetrical?
2
Solar Eclipse: How it occurs
2
Filters for solar eclipse and solar feature viewing
1
Viewing 2017 Solar Eclipse - How important is it to be in the center(blue line)?
1
Solar Telescope Projector Screen? [& intro telescope for solar eclipse]
0
How much does cloud cover affect viewing the total eclipse
2
2017 solar eclipse report
5
How to calculate eclipses on a planet in a binary star system