Is it possible to break apart a neutron star?

I was inspired by this question on Physics, as well as this question right here on Astronomy. Neutron stars are tightly bound together as neutron degenerate matter. They're very massive and have a strong gravitational field. Is it possible to break one apart into sizable chunks? How would you do this?

The answers given are good and answer my question; I'll just clarify some one thing (based on the comments) for posterity.

It would appear theoretically possible (to some degree) through extreme applications of recycling to trigger mass shedding in pulsars.

Pulsars are rapidly spinning neutron stars, the fastest class of which are millisecond pulsars. The current belief is that they build up rotational speed through accretion, a process known as recycling. One study, Recycling Pulsars to Millisecond Periods in General Relativity (Cook, et al), explores the limitations of this process.

The following chart shows their results: 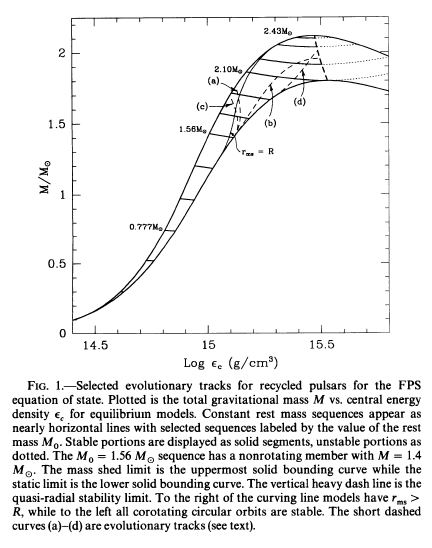 At the point where the dotted lines meet the two plots, you can see a reduction in mass at those energy levels. This is due to the angular velocity of the body creating instability which results in mass shedding - essentially mass at the equator of our neutron star being flung off the star due to the body's angular velocity.

Unfortunately, this is not exactly an easy process.

The timescale to accrete the required rest mass, ~0.1 M☉, at the Eddington limit, ~10-8 M☉yr-1, is ~107 yr. This timescale is largely insensitive to the adopted nuclear equation of state. If other astrophysical considerations require a considerably shorter time scale, then the simple recycling scenario described here will have to be modified beyond the variations explored in this paper.

(Note however that the research here is actually attempting to avoid such instabilities, and they accomplish this by adding even more mass, such that the body can support even greater rotational velocity without encounter instability. Additionally, they're trying to create millisecond pulsars, but we don't need to do this as they exist naturally, so we could save ourselves a lot of time by (very carefully) approaching an existing millisecond pulsar)

I don't think this would exactly be breaking apart (despite Wikipedia's use of that exact verbiage to describe it), but it allows for the return of mass that was at one point in a neutron star. Of course, chances are our theoretical neutron star miners are very likely to be the ones who put that mass on the neutron star to begin with. On the other hand, this (hopefully) accomplishes the task without reducing the object to a quark star or black hole.

One problem is if you split a NS into too small pieces, the gravity of each piece becomes weaker, and with the pressure reduced, it may no longer be highly degenerate. The minimum neutron star mass is roughly 0.1 M$_\odot$ but this is for a totally cold NS, as described in this physics stackexchange answer. The neutrons will then decay into protons and electrons in 886 seconds and you get new entirely hydrogen stars. Perhaps, at the high end of NS mass range it can be split into two NS, but one needs to do the calculation.

Another problem is that a NS is not a solid in the interior, so the concept of cleaving simply does not apply. The very center is gas-like and the outer core is liquid-like. So, you can't very well cut it with a knife no matter how sharp; just as you cannot cleave a star. So, while a high energy relativistic beam could cut through the solid crust, the rest of NS would heal instantly.

Another problem is that NS is the densest material we know of, therefore to do any damage to it one would need a more dense NS (ie a more massive one). But, if one tries to smash it or press it with a NS, the two will merge into a more massive NS which might then collapse into a black hole if the mass threshold is reached. There might be a few chunks of debris that get away, but again these would instantly become hydrogen gas.

So, I conclude that the answer to this question is that it cannot be done with anything known today.

There is a simple way to totally undo a NS though. The process of creating a NS is a reversible process. That is, if you simply heat a NS sufficiently, it becomes non-degenerate. Eventually the neutrons decay and it becomes a hydrogen star.

On the basis of the recent detection of GW170817 and a host of other observational evidence, it seems that a neutron star merger is one way to get mass out from a neutron star - maybe some tenths of a solar mass.

There is also evidence that the ejected material from the collision is neutron-rich, at least initially, and then produces neutron-rich nuclei through the r-process.

It is impossible to have small lumps of stable neutron star matter. A high density is required to prevent the neutrons decaying (see https://physics.stackexchange.com/questions/143166/what-is-the-theoretical-lower-mass-limit-for-a-gravitationally-stable-neutron-st ) The (theoretical) minimum mass for a stable neutron star is of order 0.1-0.2 solar masses, though none have been seen in nature.

The outer edge of a neutron star contains very tightly packed neutrons, protons and electrons. I'd try shooting the Neutron star with positrons to collide with the electrons creating heat and growing positive charge. The combination of heat and positive charge and localized matter-anti-matter explosion (just might) gradually shed some mass, a few protons here and there, reaching escape velocity. It would take a long time, but it just might work.

But remember to stand back when the star gets sufficiently lighter and reaches the critical inverse of the Tolman–Oppenheimer–Volkoff limit when it could and probably will rapidly de-Neutron and rapidly expand. I think this might be the best way to do it (though I also like the spin it very rapidly answer).

27
Can we (theoretically) spin the black hole so strong that it will be broken apart by centrifugal force?
4
What happens when star spins too fast?