So, I've googled and wiki'd on this, but no clue, so I turn my question to the community: 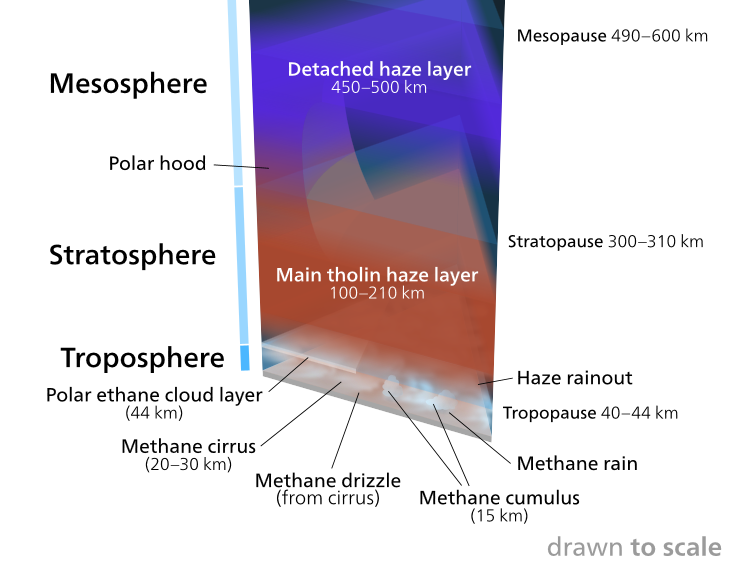 I got to think whether the haze takes the role of clouds on earth when it comes to energetics. From this a bunch of questions arose:

I would like to be able to make a statement such as "Dust" or "Haze-controlled" energetics for the stratosphere of Titan, if this is so. It would be nice if you helped to clear this up.

This is a part answer to your question, based on some recent research of the photochemical behaviour modelled and observed for Titan's tholin haze and modelling of Titan's stratosphere.

The process appears to begin, according to the paper Ice condensation layers in Titan’s Stratosphere (Barth, 2012) (Abstract only - paywalled), with

Photochemical destruction of methane along with the destruction of nitrogen molecules from energetic electrons in Titan’s upper atmosphere result in the production of a number of hydrocarbon and nitrile compounds which may be capable of condensing at the colder temperatures of Titan’s lower stratosphere.

then, according to the paper Laboratory experiments of Titan tholin formed in cold plasma at various pressures: implications for nitrogen-containing polycyclic aromatic compounds in Titan haze (Imanaka et al. 2004), in particular in reference to Titan's stratosphere,

The significance of these UV absorbing molecules is explained in the article Photochemical activity of Titan’s low-altitude condensed haze (Gudipati et al. 2013) (Abstract only - paywalled), they state that tholin haze could form on condensed aerosols in Titan's atmosphere, demonstrating that, at least part of Titan's atmosphere is photochemically active. Through modelling, they found that

Detected in Titan’s atmosphere, dicyanoacetylene ($C_4N_2$) is used in our laboratory simulations as a model system for other larger unsaturated condensing compounds. We show that $C_4N_2$ ices undergo condensed-phase photopolymerization (tholin formation) at wavelengths as long as 355 nm pertinent to solar radiation reaching a large portion of Titan’s atmosphere, almost close to the surface.

and evidence of these ices is suggested in the article Titan’s aerosol and stratospheric ice opacities between 18 and 500 μm: Vertical and spectral characteristics from Cassini CIRS (Anderson and Samuelson, 2011) stating that the ices and aerosols

appear to be located over a narrow altitude range in the stratosphere centered at ∼90 km. Although most abundant at high northern latitudes, these nitrile ice clouds extend down through low latitudes and into mid southern latitudes, at least as far as 58°S.

Not the answer you're looking for? Browse other questions tagged solar-system atmosphere titan or ask your own question.