What is the current accepted theory for Neptune's immense wind speed?

According to "Neptune: The Other Blue Planet in Our Solar System" (Choi, 2010), Neptune, despite its great distance from the sun, is the windiest planet in the solar system, with winds reaching 2000km/h (1500 mph) as detected by the Voyager 2 probe in 1989.

Given that Neptune is 30 AU from the Sun, what are the currently accepted theories for where the planet gets energy for these immense wind speeds?

Disclaimer: Most of what is written here is based highly on theory and speculation. Voyager 2 is the one and only trip we have taken to Neptune and most of these theories are built upon the data it has sent back. Leave large room for error

Before we start answering why Neptune is windy we should first specify if Neptune is even windy in the first place. What proof do we have?

One observation was of a large abhorrence on the surface of Neptune aptly titled "The Great Dark Spot". Repeated viewings placed the movement of the GDS to be about 700mph. 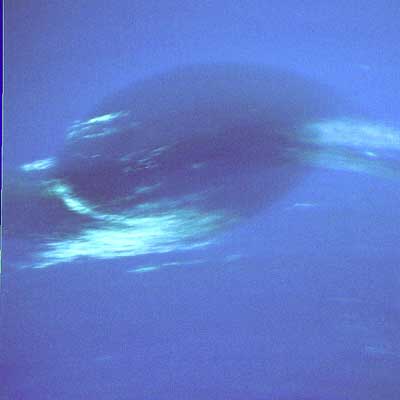 A lot of observations and images of Neptune have come from the Keck II Telescope, which is able to observe other markings moving at similar to faster speeds on Neptune.

What causes the winds on Neptune?

It's theorised that there are two potential causes to Neptune's winds. Shallow processes in the outer atmosphere or much deeper atmospheric changes that extend into the interior.

http://www.space.com/21157-uranus-neptune-winds-revealed.html (paraphrased for simplicity) Claims that

The researchers found the windy layers of Neptune occupy the outermost 0.2 percent of It's mass, suggesting that shallow processes drive those winds, such as swirling caused by moisture condensing and evaporating in the atmosphere.

What is the main source of energy for these winds?

So now you are probably wondering where Neptune get's this energy from as it is so much further from the Sun than we are.

http://nineplanets.org/neptune.html Claims that this is due to Neptune's own internal heat source radiating twice as much energy as it receives from the Sun.

Why does Neptune have stronger winds than Earth then?

So theoretically, if it was down to energy, it would make sense that Earth, being so much closer to the Sun, would have much more energy required to reach these speeds.

The Sun is the main provider for our energy but it also creates turbulence in the atmosphere. It's cooling and heating of the layers keeps air constantly rising and falling, disturbing natural air flows and stemming the size of our storms.

On top of this http://www.space.com/18922-neptune-atmosphere.html claims that 80% of Neptune's atmosphere is molecular Hydrogen.

Hydrogen being the smallest and lightest element requires less energy to reach high speeds than our larger, nitrogen based atmosphere. This may not be a main factor to consider but it is certainly contributing in no small amount.

10
What is the current accepted hypothesis of what caused Triton's retrograde orbit around Neptune?
4
Before Voyager 2, what were the highest quality photos of Uranus and Neptune?
4
What constraints are there on solid material in the ice giants?
0
Neptune's Internal Heat Source
3
Consequences of strong wind on an alien Planet on the possibility of life