What is the cause of the variation from high and low mean obliquity periods of Mars?

It is reasonably well known that Mars has a greater obliquity range than Earth, due to Mars lacking a stabilising influence of a large moon. However, the Martian obliquity seems to have gone through periods of high and low mean obliquity, as shown in the top chart below: 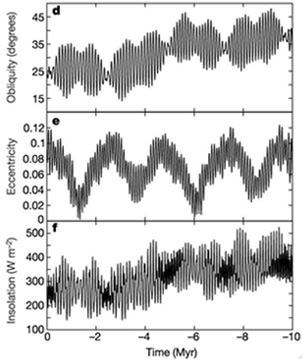 What is the current accepted theory as to why there are periodic high and low mean obliquities on Mars?

(Please note, I am not asking about orbital eccentricity)

As you can see more clearly from the extended figure, the simulation doesn't particularly suggest that this is periodic behavior. The question is, then, what happened ~5 million years ago that changed up Mars' obliquity like that?

Laskar mentions the event in the 2002 paper, but doesn't bother to offer any particular physical cause. These are numerical orbital simulations after all, not recorded observations. As unsatisfying as it might be, I think your answer is that evidently the planets aligned, so to speak (albeit probably not in a literal line).

Fig. 8 in the 2004 paper gives a tiny bit of context in terms of uncertainty, it shows that the simulation is only precise for the last 10 million years, and then goes chaotic.

Laskar mentions that his data are free to anyone who requests it, although I can't say how accessible it would be. In theory, someone could go in there and look for correlations (e.g. maybe there was some kind of strong resonance with the Earth and/or Jupiter around that time). I looked through ADS a bit, and found a newer paper by Edvardsson and Karlsson (2008) that pretty much supports Laskar's results in over the past 8 million years, but my brief search didn't turn up anything looking into what exactly caused that anomaly.

Finally, from context it appears that Touma and Wisdom (1993) were the ones to first discuss that obliquity drop, although their paper unfortunately appears to be hiding behind a Science paywall.

4
If Mars orbited the Earth how distant would it have to be to cause the same tides?
8
How did the Mars satellites “take cover” from the recent comet flyby?
7
As viewed from Mars, what are Jupiter's and Saturn's maximum brightness in apparent magnitude?
4
Where does the CO2 in Mars atmosphere come from?
4
What would a terraformed Mars look like from Earth?
12
Is the curvature of Mars visible from the top of Olympus Mons?
3
What is the temperature about 10 or 15 feet below Mars' surface?
1
Is there a general term used to identify the high flat features within Noctis Labyrinthus on Mars?
4
Is it possible to find what crater the Mars meteorites come from?