Why do black holes have jets and accretion disks?

If supermassive black holes possess the gravity required to prevent the escape of photons and other mass particles, why do jets and accretion disks form?

They seem to indicate that something is coming out of the black hole, while mathematics and physics seem to tell us that this is impossible.

It would seem that supermassive black holes only exert gravity towards themselves.

When it comes to accretion disks, nothing is coming out of the black hole. That's just orbiting matter, though it is swirled around a bit by frame dragging. Even at high gravity, the ability to orbit around a massive body still exists. The gravitational force is already being "used up" to cause the orbiting (it accounts for the centripetal force), so there is no need for the gas to fall in.

As for jets, as far as I can tell there is no single explanation (I am not sure of this). One candidate explanation is the Blandford-Znajek process1 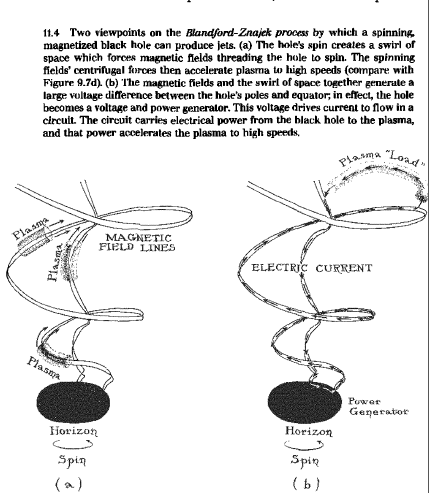 Basically, most black holes rotate, and sometimes the intense rotation can cause forces that overcome gravity, even by a few orders of magnitude.

When a black hole spins, magnetic field lines anchored to it2 spin along with it. Plasma (from the accretion disk) is then flung out along these lines, similar to what happens when you put a marble in a conical cup and rotate it. This is depicted in the first image.

In the second image, current passes through the field lines (I do not understand this one as well as the first, however this post has a reasonable explanation), accelerates plasma with a mechanism similar to an electromagnetic railgun. This is another way of creating jets.

Note that the energy here comes from the rotational energy of the BH, not the mass-energy of the "contents" of the BH (which is lost to the universe unless we consider Hawking radiation)

(I shall have a closer look at the paper when I have time and update the answer accordingly. Comments appreciated)

2. While the no-hair theorem forbids a naked black hole from posessing magnetic field lines, one with an accretion disk may have them as the field lines cannot "escape" through the disk.

The jets are formed in a similar fashion. Particles spinning into the black hole generate radiation which gets appears to be "emitted" by the black hole.

Not the answer you're looking for? Browse other questions tagged black-hole supermassive-black-hole astronomical-jet .

1
Accretion discs emitting jets
0
Jet streams of black holes emit
20
How can a supermassive black hole cause so much energy to enlighten its matter when its massive gravity prevents light to escape?