What is the naming convention for newly discovered objects?

Often, a newly discovered star is identified by a seemingly random string of letters and numbers. I'm sure that there is some order to it, though. What is the naming convention for newly discovered astronomical objects?

I'm sure NASA doesn't ask the public, as something like this would happen: 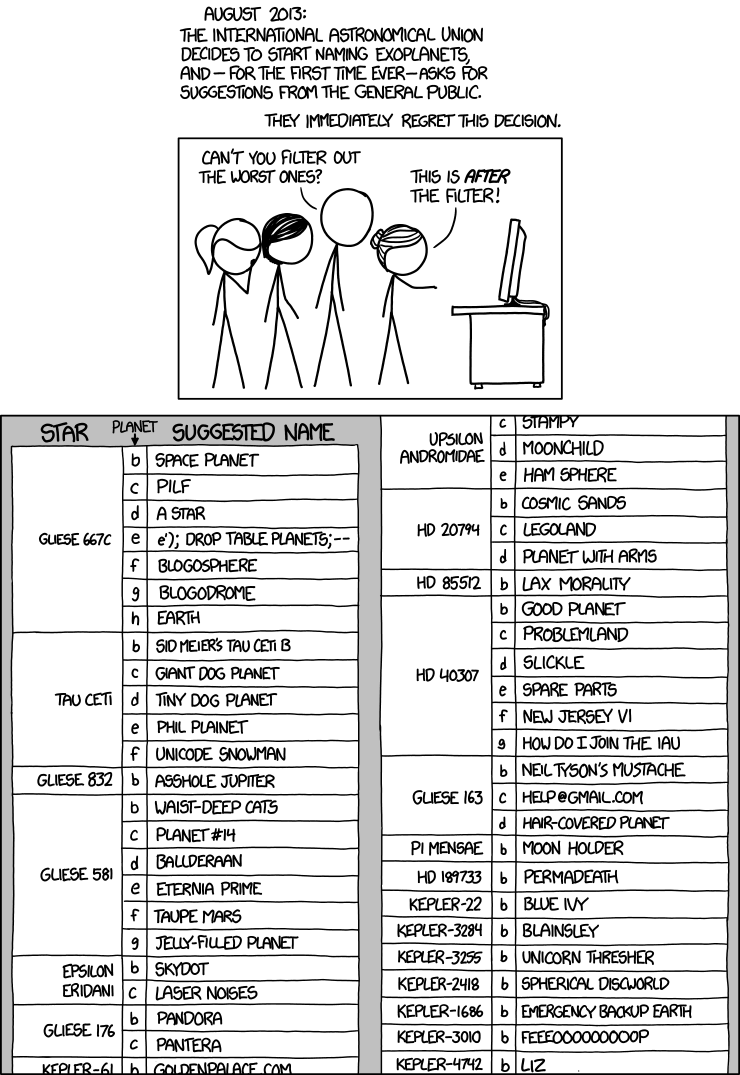 For example, for "Specifications concerning designations for astronomical radiation sources outside the solar system", the IAU states that the designation (or sequence of letters and numbers) follow a general form:

is a code (i.e., alphanumerical string of characters) that specifies the catalog or collection of sources.

The sequence (or numbering) is an alphanumeric string of characters, normally only numerical, that uniquely determines the source within a catalog or collection. It may be a sequence number within a catalog (e. g., HD^224801), a combination of fields, or it may be based on coordinates.

and finally, the Specifier

The specifier is optional and allows one to indicate other source parameters. However, they are not required syntax and are enclosed in parentheses.

“a random string of letters and numbers” is often the identifier used by one observer or work group for their observation or work. That is, ‘string’ designators are often internal names, and never meant to be settled and permanent for wider use- even use by scientists two or three steps removed from that observer or work group.

The confusion is often due to hot-button factoids that get picked up by the lay media, due to some ‘sciency’ angle that might attract clicks. (And of course, there are the outright conspiracy pages and chatter, that pick up tidbits and lay them out for consumption, without context or deeper understanding but with an angle.) These pop sci blurbs get ahead of themselves, sometimes running the internal designation without the explanation- readers have short attention spans, and these blurbs are getting shorter and shorter. Ultimately, you get YouTube, for people who can’t even be bothered to read. Even in the case of ‘official’ releases (e. g., STSCI/JHU for Hubble blurbs) the pop sci writeups are done by journalists, not scientists who are just better at writing. There’s a general interpretation and filtering going on, which is to be expected- try reading an astronomy paper (an actual, peer-reviewed journal paper) through the eyes of a non-astronomer. It might as well be greek. Unfortunately, this interpretation and filtering is getting more and more severe as a field progresses, leaving the non-scientists further and further non-.

In the case of new objects (not ones with approved, general names), the list of observing targets hadn’t been winnowed down much, from raw detections (there are simply a staggering number of things out there, including possible duplicate detections) to confirmed celestial objects (not cosmic-ray hits or other bad pixels, ghost images from internal reflection or the Sun, etc.) to new celestial objects (not duplicates, misplacement errors, cataloguing errors, etc.), to new objects corroborated by outside review (a whole ‘nother game). The combination of faster news cycles, shorter attention spans, and presumption on the part of Google users (the “search effect”- having information but not knowledge or understanding or experience or even context) means internet users are seeing more and more temporary designations.

An observer or, nowadays, work group submits a paper with their observation/work for formal publication. Due to quality checks, literature search and prior-work reviews, outside informal consultations, and another round of checks and reviews by outside corroborators, this publication often takes over a year. Then, the paper is read and considered by the wider community- stellar astronomers for stars, cosmologists, astrophysicists, etc. for new (therefore distant) galaxies, etc. Then , the permanent naming process can begin, by the convention of that community. Stars do not get named by cosmologists, etc., and for that matter, asteroids and comets have separate naming paths despite both falling in planetary science.

The number of stars is just staggering, in our galaxy alone… and we have been resolving the exceptional stars of other galaxies for some time now. It’s pretty presumptuous to expect that the 1,000,000,000,001th star just identified by you will not get some sort of letter/number series attached to it. The closest we get is some sub-catalog, where an observing program (by plan) selects for targets that inherently fall in together. Then the nth new object is often designated as “[catalog name] n”.

The at-hand example is Luhman 16. That’s the 16th catalog entry, in the body of work compiled for a purpose (nearby dwarves), by a given org (Luhman and his collaborators). However, while K. Luhman and others were in the middle of the project, the detection went by “WISE J104915.57-531906”, the entry for yet another one of a myriad entries by the WISE observatory. It was three years between WISE detection, and formal, public announcement, and even that was given as WISE J104915.57-531906. It was still some time again before most settled on Luhman 16. And still, other catalogs have their own designations.

9
Did the temporary asteroid name DA₄₂ arise naturally and fortuitously (as a precursor to a Douglas Adams namesake)? Or did someone help it along?
2
What does "TON" in TON 618 stand for?