How does the Earth move in the sky as seen from the Moon?

I just want to be sure I am visualizing this correctly, because it seems odd. The Moon is tidally locked to the Earth but there are wobbles to its motion due to libration. So from a point on the surface of the near side of the Moon, the Earth would always be near the same place in the sky? It would describe a small circle or a side-to-side wobble over the course of a month, but never move far from that point?

That would seem very strange, like it was a gigantic stage prop or something. We are so conditioned that everything rises and sets (except for a few stars near the poles).

Still new at stellarium but here are some quick capture gif lasting one month. Sorry about the quality- limited to 256 colors for smaller gifs. Date on lower left corner. By the way the sun is of course the brightest and i use it as reference for recording (start record when sun is in frame then stop when it appears again in the same position which is roughly one month)

Location on Moon : Sea of Tranquility

One whole day 24 hours (give or take a few minutes)

Location on Moon: Sea of Tranquility

other end of ellipse near 185 azimuth line 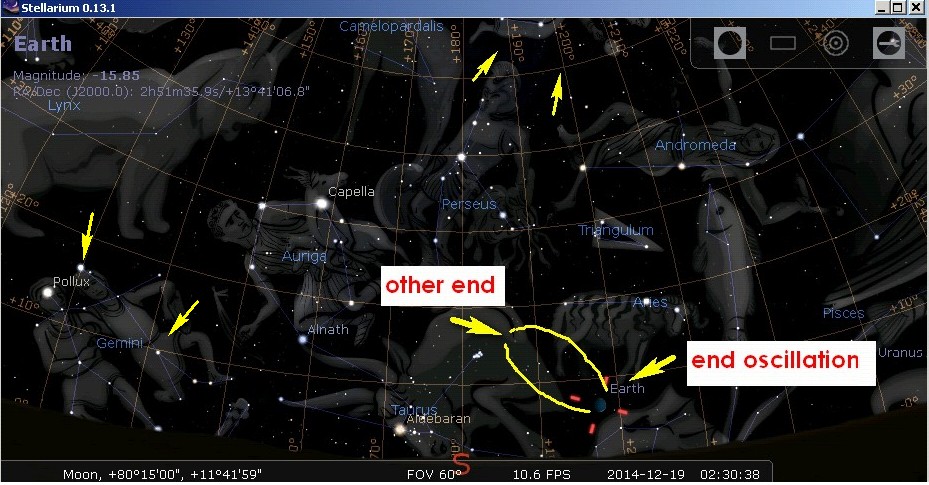 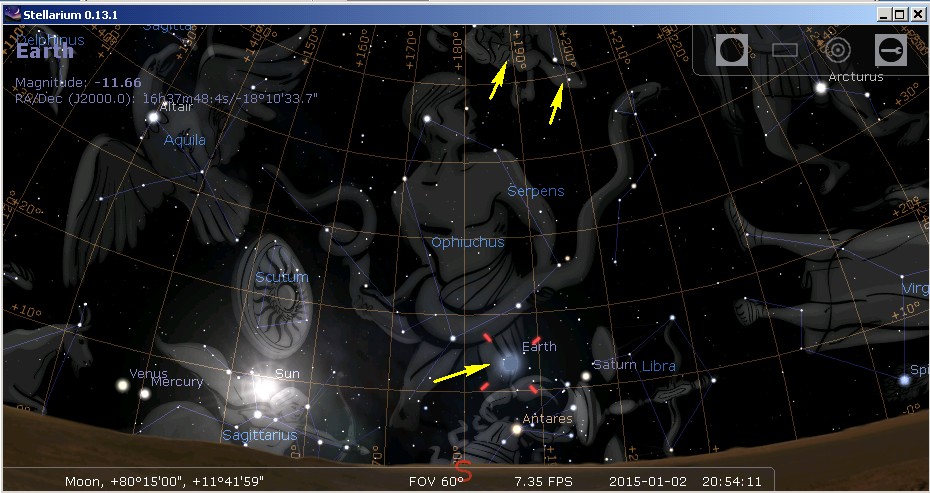 picture 5 shows my stellarium location settings on the moon 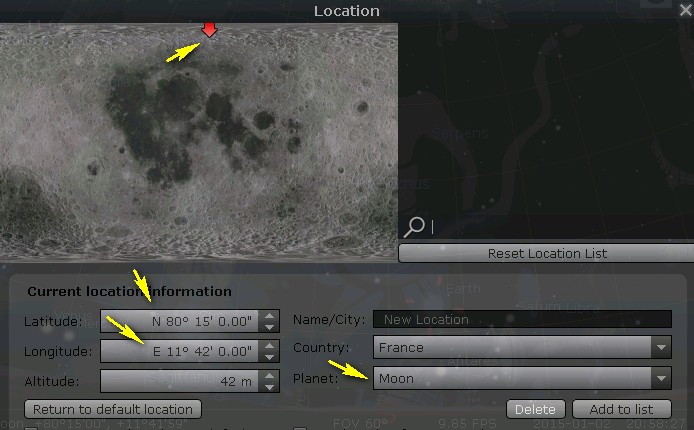 You are correct. The Earth would always appear in approximately the same location in the sky, when viewed from a point on the lunar surface. And it would be seen to spin, the continents coming in and out of view over the course of an Earth day (24 hours). The sun would make it's way across the sky, from one horizon to the other over a period of about two weeks, to rise again in another two weeks.

This might sound odd, because the rock we live on spins pretty quickly relative to the most obvious points of reference. In general (assuming that you are viewing from a place not particularly close to one of the poles) the bodies we see in the sky rise in the East, and set in the West about 12 hours later. But if you take a little bit closer look, you start to see that this is not the whole story. Each night, the moon rises and sets almost an hour later than the night before. The stars that you can see at night shift over a period of one year. And the planets move in such strange patterns that before Copernicus (at least in Europe), they seemed to just be wandering.

And not everything appears to move accross the sky. As you mentioned, Polaris, the north star, seems to hang in one spot all of the time, though you can't see it during the day. But even taking all of this into account, the idea of a large planetary body just hanging in one spot all of the time in the sky, may still seem... um, alien. And to that, I might just say, we've been here on this one planet an awfully long time. It's bound to feel a bit like home.

To add to Mark Bailey's answer; the Earth would indeed hang in the sky and rotate, but it would also wax and wane over the course of a lunar day (27.3 Earth-days).

During the lunar afternoon, the Earth would wax (less shadow) and be half-full again (on the other side) at lunar sunset. Full Earth would occur at lunar midnight. This would be about 16 times as bright as a full Moon on Earth, so it never gets really dark on the lunar Near Side. The Earth would then wane again until it was half-full at lunar dawn.

To expand a little more, yes the Earth would hang in the same spot in the sky, moving around in a small circle as the moon rotated around it over the course of each of its 28 day orbits. It would have phases, full Earth when the moon is between it and the sun, new Earth when the Earth is between the moon and the sun, and wax and wane between these two points. Each time the Earth was full, a different part of it would be visible from the moon, depending on the season and how it happened to line up when full Earth occurred.

The Earth would roll in the sky according to the seasons on Earth and the precession of the moon's orbit. The moon tilts only 1.5 degrees from the ecliptic and so in essence has no seasons. The orbit of the moon is tilted 5 degrees from the ecliptic, so when it is farthest to the south of the plane of the solar system, more of the south of our planet is visible, and vice-versa when it is farthest north. But the Earth is tilted 23 degrees from the ecliptic, so this is what would mostly determine what part of it was visible from the moon. Here is a good summary of the relationship of the Earth and Moon. The distance between the two bodies is not to scale, but the relative size of the one to the other is to scale. 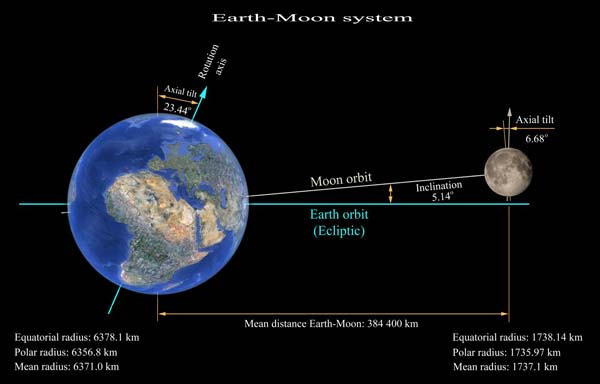 In December, Antarctica would be visible - as it was during the famous Blue Marble photo from Apollo 17, taken on Dec. 7, 1972. 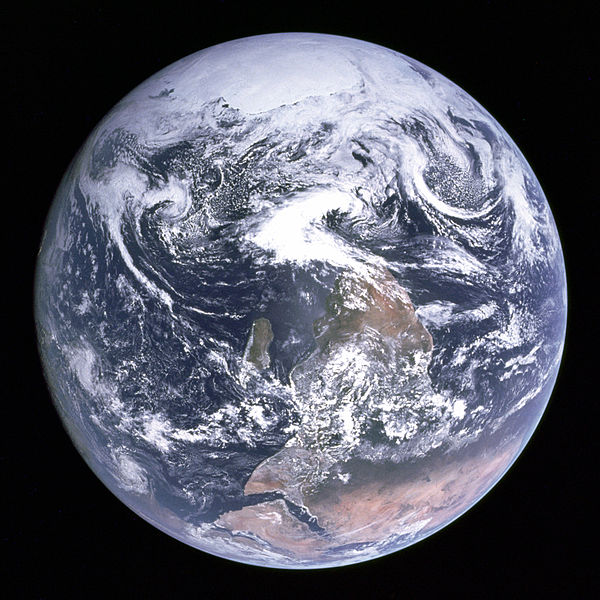 (This version of the photo is supposed to be as it was in the original photograph. They took it on the way to the moon, so the orientation of the camera was the only thing that determined which way was 'up'. If you were on the moon at far southern latitudes, this is in fact how it would look from your point of view.) 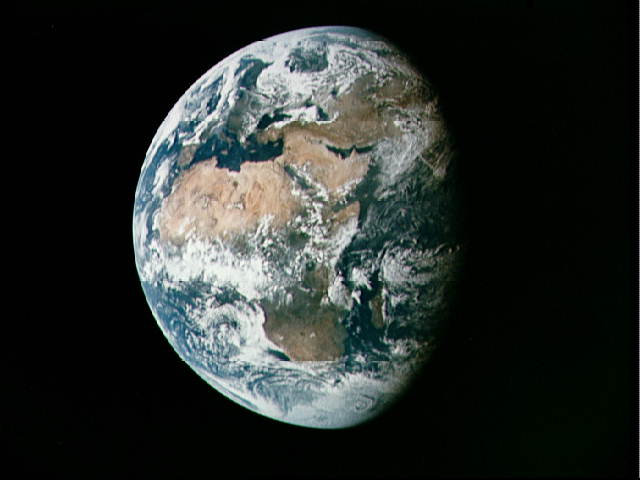 Here actually you don't see much of the Arctic. The moon's orbit had carried it a bit south of the Earth at that point. Heading to it meant going south a bit, so when they looked back at the Earth, they saw less of the far north.

Just to be clear, something you would NEVER see is this, which has been widely misunderstood as a photo of the whole planet from space. Actually it is a super-wide-angle photo taken from low earth orbit - the horizon line is for the part of the world the satellite could see, it is not one hemisphere of the Earth. 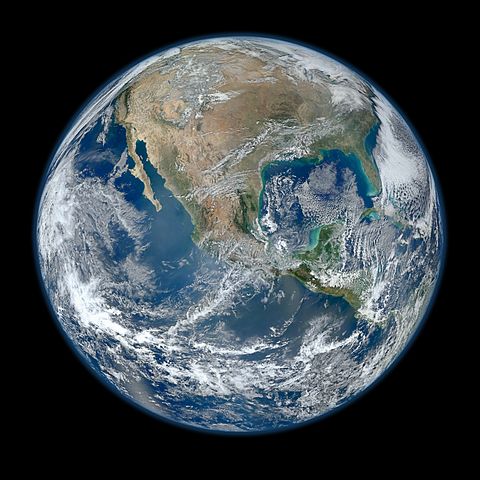 If you think about it for a second you realize this can't possibly be true. The United States is gigantic, if it was really this size Canada would occupy the whole arctic and roll over onto the other side of the world, displacing most of Russia. Argentina and Chile would take the place of Antarctica.

24
Can you see man-made lights on the dark side of the Earth from the surface of the moon with the naked eye?
3
Visibility of earth from moon during day-time of moon

5
Why don't stars move in the night-sky as the moon does?
10
What is the angular diameter of Earth as seen from the Moon?
7
Is there any residual oscillation left from the Moon rotation?
12
Is the moon "perfectly" tidally locked and, if not, how long would it take us to observe it's rotation?
9
How does the sun move over the year in the sky of the Moon?
12
How does the Moon look like from different latitudes of the Earth?
9
How does the Moon move in the "night" sky as seen from the poles?
3
Moon's path as seen from Earth
2
Does the Sun and Moon basically appear to "move on the sky" identically regardless of location and date?
15
Was lunar libration first observed or first predicted? In either case, who was the responsible party?