Can you see man-made lights on the dark side of the Earth from the surface of the moon with the naked eye?

This question is prompted from a comment on this answer:

Could a person on the surface of the moon see man-made lights on the dark side of the Earth with the naked eye? If not, how much magnification would be required to do see them?

The closest evidence I could find from a quick search was this picture from Salt Lake City Schools' Website: 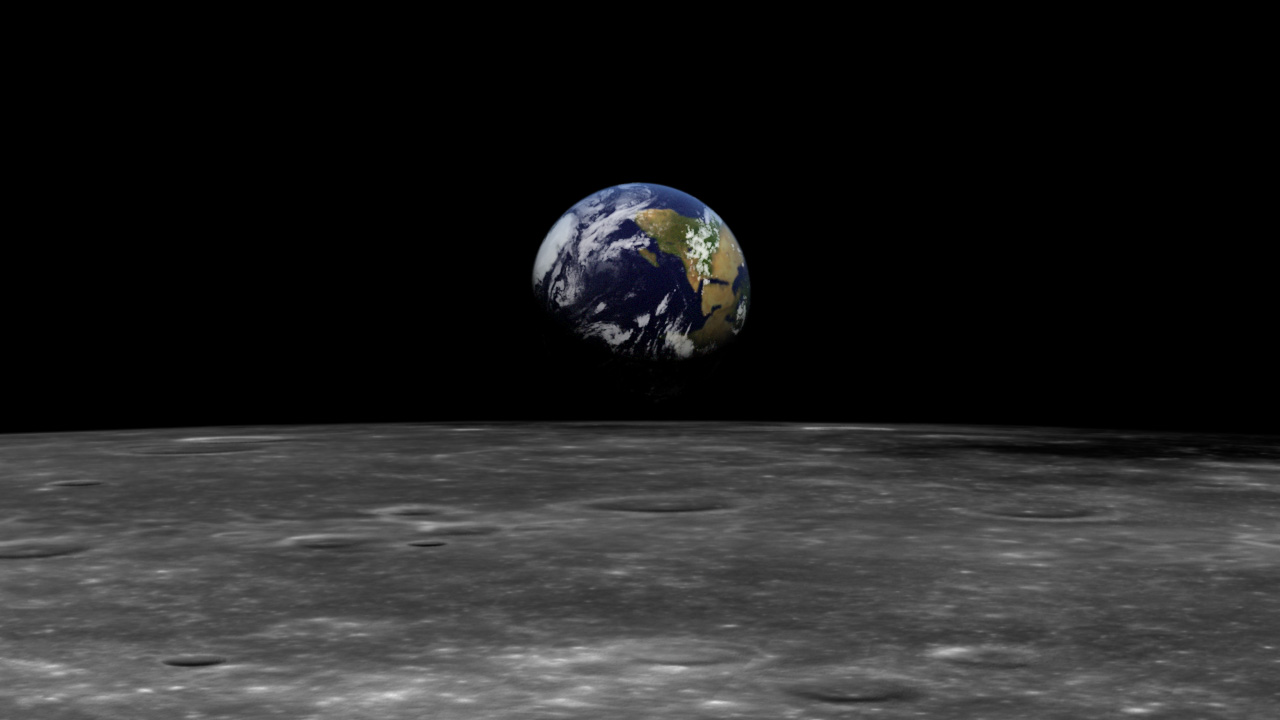 The dark part of Earth is a bit hard to see here, though it can be seen more easily in the full resolution image. You can certainly see something toward the bottom edge in the dark area, but I can't tell for sure if it is lights from Southeast Asia/Oceania or something else.

Edit: As pointed out in the comments, the image of Earth in this photo wasn't actually taken from the moon, but from NASA's Terra and Aqua satellites and combined with the lunar imagery in a 2002 visualization created by NASA to commemorate the 30th anniversary of Apollo 17.

It's highly doubtful you could see any normal light source on the surface of the earth. Using $$\text{brightness} = \frac{\text{luminosity}}{4 \pi \times \text{distance}^2}$$ (with brightness in watts, and luminosity in watts per square meter. and distance to moon of $3.84 \times 10^8$ meters.)

That's pretty dim. By, contrast sunlight at earth's surface runs about 1300 watts per square meter. In reality it'd take about a gigawatt to produce 100 megawatts of light in the visible range. That's about what it takes to power a city of a million homes. Cities also bounce most of the light they do produce off the ground, which'll have an albedo of somewhere around 0.3. So with ordinary city lights it'll take over 3 gigawatts to reach $5.4 \times 10^{-11}$ watts per square meter on the lunar surface.

You might fare better with a big laser. The Apache Point Observatory Lunar Laser-ranging Operation picks up multi-photon signals from the Apollo retroreflectors using only a 1 gigawatt laser and a 3.5 meter telescope. As the article states, the laser beam only expands to 9.3 miles in diameter on the way to the moon, so you might see it wink at you.

At 10 parsecs, the sun has a magnitude of 4.83. It'd be visible on an average night. That magnitude corresponds to a brightness of 3X10e-10 watts per square meter, about 5.6 fold brighter than our hypothetical earth based light source. That puts our light at magnitude 6.5 to 7. Naked eye visibility runs to about 6.0

Even if we assume a dark-adjusted human eye could in principle discern artificial lights on the night side of the Earth, there's the problem that your eyes won't be dark-adjusted because the day side will be much, much brighter than the night side. There's not enough dynamic range in the eye to sense that sort of a brightness difference at once.

And if you'd be looking when the Earth is new, so there's no day side visible, you'd have an even worse problem: the Sun would be in your field of view. A solar eclipse (a lunar eclipse as seen from the Earth) would be your best bet - except that the atmosphere would form a brilliant ring around the dark Earth...

1
How strong does a light source on the Moon have to be to be visible from Earth?
71
How does the Earth move in the sky as seen from the Moon?
4
Can you see city lights on the Moon from Earth?