The planets approximately orbit the sun, but a more precise statement is that the planets and the sun all orbit around a common barycenter.

Because the sun is so massive, this barycenter is very close to the sun. If we take the sun to be the origin, the barycenter travels in a complex, nonlinear trajectory (from Wikipedia): 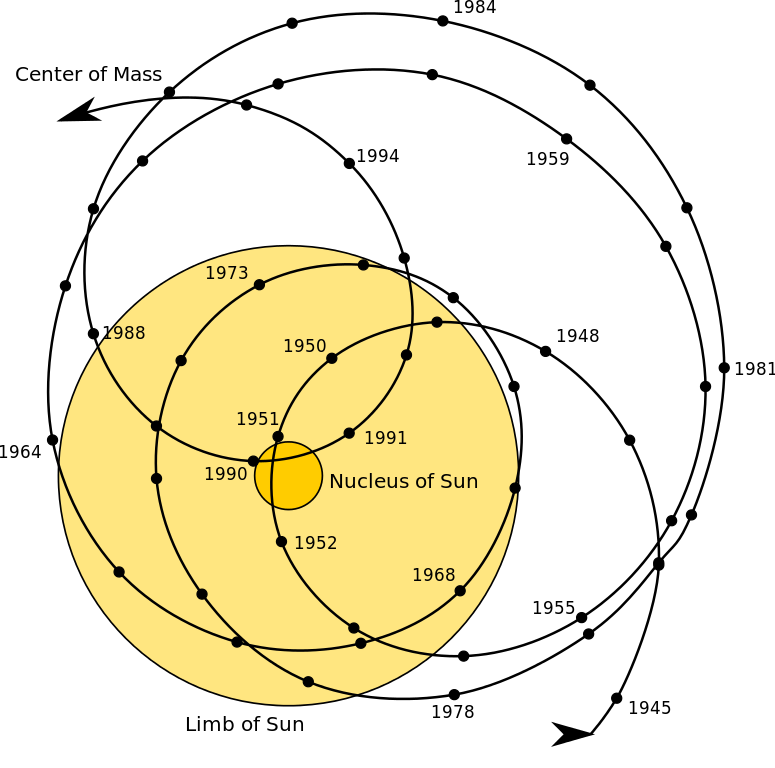 Modeling this accurately is critically important to predicting celestial events. I wrote a simulator to predict the 2012 transit of Venus, based on estimates of orbits and the assumption that the sun is at the origin.

The error introduced by these assumptions was enough to miss the transit by a solar diameter.

This data must exist, since the transit actually did happen. Additionally, errors in the orbital data of the planets could have affected it. Where can I find data on where the planets and the sun are and what trajectories they're moving in (relative to the solar system's barycenter)?

A well-known analytical planetary theory is VSOP. The paper describes six versions, most of which are heliocentric. One of them (E) is barycentric and has an extra (ninth) body: the Sun. Hence, for VSOP you have the choice of using the Solar System's barycentre as the origin and computing the position of an extra body, or of computing heliocentric positions of the planets directly.

11
Why does Pluto's Orbit underlap Neptune's Orbit
7
Calculate angle of inclination for a certain angle in a planet's orbit?
2
Is it possible for a star to orbit a planet?
1
What are the equations for an orbit with time as parameter?
10
Best approximation for Sun's trajectory around galactic center?
0
What is the shape of the Sun's orbit around the Earth taking into account elliptical orbits?
9
Error propagation methods for orbit parameters
7
Computing orbit positions of Jovian Satellites / Moons using JPL data