Would Pluto keep an orbit without its moon?

I haven't studied space that much, but I know that Pluto has very little gravity, but just enough to keep a human on its surface. Would Pluto keep a regular orbit around the sun without some extra support gravity, such as its moon?

The orbit of a planet does not in any way depend in its moons, mass or own gravity. The orbit is the same for a grain of dust as for a giant planet. It only depends on the mass on the Sun and the distance to the Sun. The eccentricity of the orbit is then given by the initial angular momentum of the orbiting object. This might explain it a bit better.

This was a really BIG breakthrough in physics, actually the foundation of physics, about 400 years ago. Big because it is irrefutable although it is counter-intuitive. It is really difficult to believe unless one tries to accept the actual observations and logic.

Yes, a planetoid such as Pluto will be able to orbit no matter how small its mass, so long as its angular momentum is within a range determined by its distance from the sun. In the case of Pluto and its primary moon, Charon, however, things are even more interesting.

If Charon were to magically disappear (ejection would be another story), the point on the line of Pluto's orbit at any one time would be very near the center of Pluto. There are other moons, but their gravitational tug is minimal. The orbital trace of the Pluto/Charon system, however, is not even inside Pluto.

Most planets have satellites that are very much less massive than they are, and thus the center of their systemic rotation is fairly close to the primary's center. The masses of Pluto and Charon, however, are significantly closer in size.

The Pluto–Charon system is noteworthy for being one of the Solar System's few binary systems, defined as those whose barycenter lies above the primary's surface . . . [108] This and the large size of Charon relative to Pluto has led some astronomers to call it a dwarf double planet.[109] . . . This also means that the rotation period of each is equal to the time it takes the entire system to rotate around its common center of gravity.[66]

Therefore, for practical purposes, with respect to the orbit of Pluto, it's far simpler to determine the trajectory of the Pluto/Charon barycenter -- which is completely above the surface of Pluto. 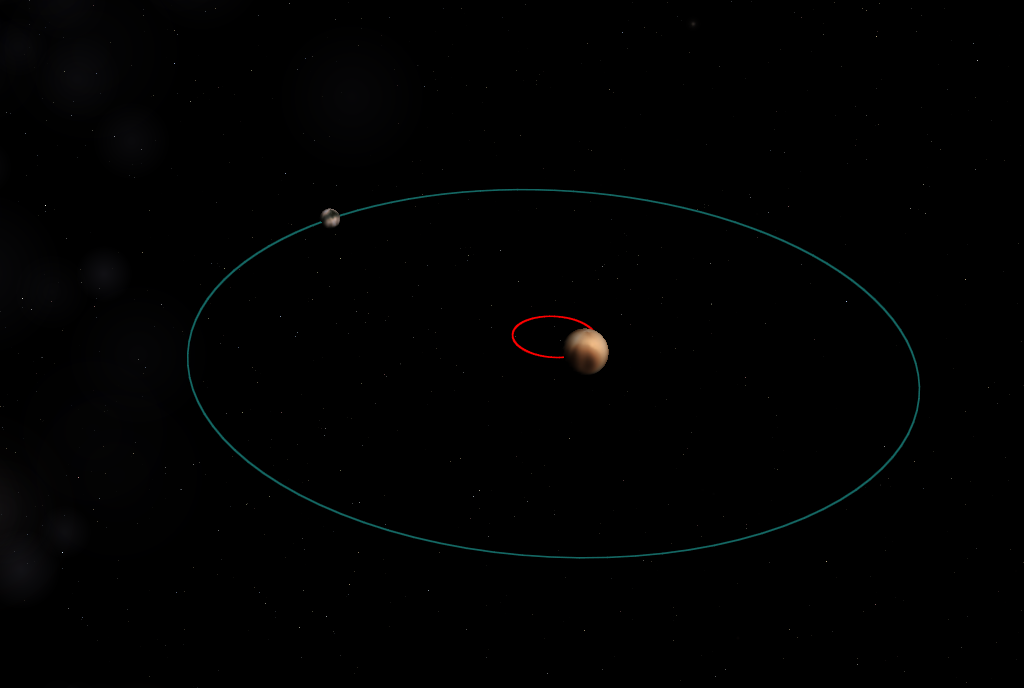 It would is a short answer.

The long answer is it depends on how you eject the mass of the moon from Pluto's sphere of influence.

A good way to think of this is if we launch a satellite into solar orbit, it can orbit the sun in the same orbit as the Earth. Now, if we launch far to much mass from the earth then we could either move closer to, or further from the sun. This is the same way rockets propel themself.

8
How much mass does an object in space need to keep a human on its surface?
7
If earth changed its orbit, what would happen to the moon?
13
Can a bullet be fired on the moon and sent it into orbit?
6
Does the Giant Impact Hypothesis explain how the Moon circularized its orbit?
9
Is a perfectly circular orbit possible?
4
How much are Neptune's and Uranus' orbits perturbed by Pluto and other KBOs?
3
Can we learn anything from the chaotic movement of Hydra and Nix?