Why doesn't Earth's axis change during the year?

I imagine the Moon plays a part in this.

As a secondary question, do the other planets in our solar system orbit the same as Earth (its axis points in the same direction in space for its entire orbit)?

The second statement is correct. The axial tilt is the primary driver of the seasons.

The first statement is not exactly correct. There is a small but persistent change in the orientation of the Earth's axis. The change over the course of a year is small. The change over the course of 13,000 years is large. In 13,000 years the Earth's axis will be tilted by about 47 degrees compared to the current orientation. In yet another 13,000 years the Earth will be oriented very similarly to how it is oriented now. I'll write more about this later.

That is not a good mental model. The only contact between your car and the ground are the bottoms of the four wheels on your car. The forces at these four small contact areas are what change your car's orientation and change your car's velocity vector. This means that the torque on your car as you turn the steering wheel and the centripetal force on your car that makes your care negotiate a turn are intimately connected. Turn the steering wheel gently and the heavy front end of your car follows suit. Assuming a gentle turn, the light rear end of you car soon follows suit. If you turn too hard, your car starts to skid instead of turn. Turn even harder yet and you risk having your car flip and roll. The motion of your car depends on that intimate coupling between force and torque.

Gravitation doesn't work like that. It instead acts on each and every bit of the Earth, all together, all at once, all the time. There is a slight variation in the gravitationally-induced acceleration across the Earth due to variations in distance to the Moon (or Sun), but these variations are small. The net gravitational force on the Earth is very much decoupled from the small net gravity gradient torque on the Earth.

The principal result of the gravity gradient torque exerted by the Moon and the Sun on the Earth is a very slow but large precession of the Earth's rotation axis (for more, read this wikipedia article on axial precession). This precession makes the Earth's rotation axis rotate about the normal to the ecliptic at a rate of one revolution per 25772 years. There are lesser effects collectively called nutations and polar motion that result from gravity gradient torque. These lesser effects are much, much smaller in magnitude but have much, much shorter periods. The largest of these lesser effects results from the 18.61 year cyclical variations in the lunar node. Even this largest component of nutation is small, two orders of magnitude smaller than the large but slow precession.

Picture the Earth as a small ball suspended in midair, not moving, although it's rotating on its axis. Unless forces are applied to it, absolutely nothing will happen. That's conservation of energy (or momentum; you can work with it either way). Earth will not spontaneously start moving in one direction because that would violate conservation of translational energy and conservation of linear momentum. If that did happen, energy would be gained out of nowhere.

So, yep, Keith is spot-on. You'd need some sort of torque to turn the Earth's axis like that.

So why does the Earth's axis move over 26,000 years (it does, by the way, just not one cycle per year)? Just like with the tides, as well as how Earth's rotation is slowing down, it's primarily the tidal forces of the Moon and the Sun at work, although the other planets do make some contributions to the overall changes.

I can add in some math if you want, but be warned, I'm learning it myself, so it won't be explained as well as you might like.

The other planets obey the same laws as the Earth, so their axes should point in the same direction throughout the year, ignoring the effects of axial precession.

The changing angle between sun and moon does cause some slight nutation in the earth's axis of rotation over an 18.6 year period.

In the case of the Earth, the principal sources of tidal force are the Sun and Moon, which continuously change location relative to each other and thus cause nutation in Earth's axis. The largest component of Earth's nutation has a period of 18.6 years, the same as that of the precession of the Moon's orbital nodes.1 However, there are other significant periodical terms that must be calculated depending on the desired accuracy of the result.

The principal term of nutation is due to the regression of the moon's nodal line and has the same period of 6798 days (18.61 years). It reaches plus or minus 17″ in longitude and 9″ in obliquity. All other terms are much smaller; the next-largest, with a period of 183 days (0.5 year), has amplitudes 1.3″ and 0.6″ respectively.

It's not a large effect (from link): 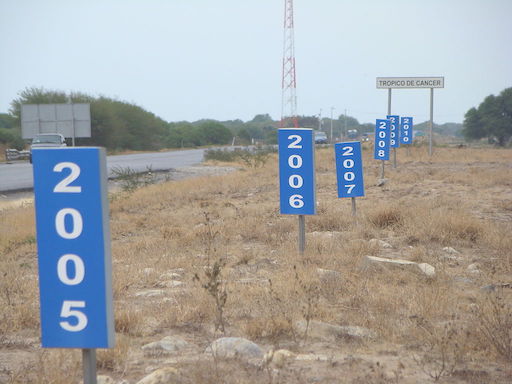 The Earths rotation about the Sun is not circular but elliptical. During its orbit the Earths distance from the Sun changes. Many sources report that while this is true, it has little effect on the season. These sources indicate that the orientation of the Earths axis combined with the "tilt" of the Earths orbit above or below the Suns equator determines the seasons.

Lets Keep things simple. Below is a picture of the orbit of the Earth. 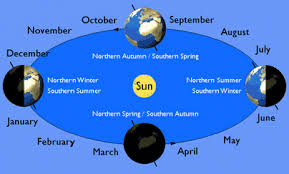 I take the question to mean why the axis doesn't point toward the Sun all the time. The answer comparing the Earth to a Gyroscope is the easiest to use. The spinning effect on the axis does cause a force that helps keep the Earth's axis at a 23.5° angle (Approx) there is a slight wobble of a few meters in the earths axis. Try looking from above might make it clearer. There is a red circle of rotation at the pole if you look closely. 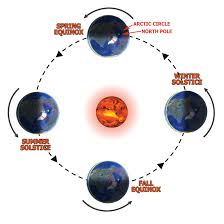 The Earth is not driving around the Sun it is in effect being pulled to the Sun but is going fast enough around it to counteract gravity and not get closer, the same way satellites stay orbiting in space. The car would be more like a spaceship as it would have a force/thrust pushing it around the Sun.

As for the second question the other planets do the same but at different angles.

Because the Sun's gravitational pull on Earth is (nearly) uniform, it doesn't tilt the Earth, it only pulls it as a whole, without affecting the Earth's spinning around its own axis.

The Earth's radius is ~ 6,400 km, the distance to the Sun is ~ 150,000,000 km, and the gravitational force diminishes as a square of a distance, so the ratio in the pull on some two small volumes of Earth, the closest and the farthest from the Sun at a given moment, is

so the tilting force is very small.

Were the variation exactly 0 (i.e. the ratio exactly 1) the tilting force would be exactly 0 and the Earth's spinning wouldn't have been affected, at all. To get that, remove the Sun from the picture.

And by the general theory of relativity, if Earth were moving in a uniform force, it would be as if there was no force at all, from Earth's point of view.

You can easily prove this yourself.

6
Ambiguity in Earth's "Tilt"
0
What is the shape of the Sun's orbit around the Earth taking into account elliptical orbits?
8
What point does Earth actually orbit?
0
What is direction of Sun's axis of rotation relative to the Earth's orbital plane around the Sun?
1
Day/Night Cycles and Seasons if the Earth's Rotational Axis and Orbit Changed
2
Calculating length of summer solstice day using tilt and latitude
2
What would happen to the solar system if Earth's mass was removed?
3
What would the Earth's peri- and aphelion have to be in order to have the same seasons due to its orbit?