Can our Sun become a black hole

Sorry for so many questions but i cannot miss them as these are some questions on my mind.

No, the sun won't ever become a black hole.

The choice between the three fates of stars (white dwarf, neutron star, black hole) is entirely determined by the star's mass.

A star on the main sequence (like most stars, including our sun) is constantly in a balance between the inward pressure of gravity and the outward pressure of the energy generated by the hydrogen fusion that makes it "burn".1 This balance stays relatively stable until the star runs out of whatever its current fuel is - at that point, it stops burning, which means there's no longer outward pressure, which means it starts collapsing. Depending on how much mass there is, it might get hot enough as it collapses to start fusing helium together. (If it's really massive, it might continue on to burn carbon, neon, oxygen, silicon, and finally iron, which can't be usefully fused.)

Regardless of what its final fuel is, eventually the star will reach a point where the collapse from gravity is insufficient to start burning the next fuel in line. This is when the star "dies".

If the star's remains2 mass less than 1.44 solar masses (the Chandrasekhar limit3), eventually gravity will collapse the star to the point where each atom is pushed right up against the next. They can't collapse further, because the electrons can't overlap. While white dwarfs do shed light, they do so because they are extremely hot and slowly cooling off, not because they're generating new energy. Theoretically, a white dwarf will eventually dim until it becomes a black dwarf, although the universe isn't old enough for this to have happened yet.

If the collapsing star is above the Chandraskhar limit, gravity is so strong that it can overcome the "electrons can't overlap" restriction. At that point, all the electrons in the star will be pushed into combining with protons to form neutrons. Eventually, the entire star will composed primarily of neutrons pushed right up next to each other. The neutrons can't be pushed into occupying the same space, so the star eventually settles into being a single ball of pure neutrons.

Black holes are the step beyond neutron stars, although they're worth discussing in a bit more detail. Everything, in theory, has a Schwarzschild radius. That's the radius where a ball of that mass would be so dense that light can't escape. For example, the Schwarzschild radius for Earth is about 9mm. However, for all masses smaller than somewhere between 2-3 times the mass of the sun, it's impossible to squeeze the matter small enough to get it inside that radius. Even a neutron star isn't massive enough.

But a star that becomes a black hole is. We don't actually know what happens to a star once it's become a black hole - the edges of the "hole" itself is simply the Schwarzschild radius - the point light can't escape. From outside, it doesn't matter whether the matter collapsed to the point that the neutrons started overlapping, whether it stopped just inside the radius, or whether it continued collapsing until it broke all known physical laws. The edges are still the same, because they're just a cutoff based on the escape velocity.

1 I'm ignoring the red giant phase here, since it's just a delay in the "run out of fuel" step. Basically, the core is helium "ash", while the hydrogen fusion process takes place further and further out. Once that runs out, you get a nova and the collapse continues.

2 Likewise, I'm ignoring the mass that stars shed in their various nova phases. All given masses are based on the remnants left behind.

3 Every source I've found for Chandrasekhar mass, except Wikipedia, gives 1.44 or 1.4 solar masses (which are compatible). Wikipedia gives 1.39, and gives at least one source to back that number.

I'm not an astronomer, just an enthusiast, but I believe the only way that the sun could become a black hole is if when the Andromeda galaxy and the Milky Way galaxy collide, if our star combines with another star and the mass of the two is great enough to create a black hole then it's possible; however, from what I've read, despite the enormous size of galaxies and the absurd number of stars within them, because the planets and stars (especially in the outer edges of the galaxy) are so far away that collisions are actually very unlikely.

If the size of the black hole is the same as the size of the Sun, then the planets of our Solar system will maintain their orbital path, which will not have a significant effect on them. Even though the Earth will be present in its place, life on it will be destroyed because without the sun's light all the creatures can't survive. 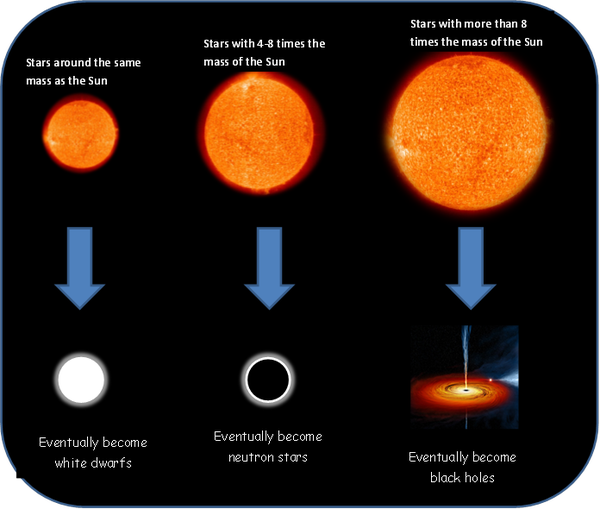 Not the answer you're looking for? Browse other questions tagged the-sun solar-system black-hole or ask your own question.

1
What are the possible star fuels?
1
Collapse of a star below the mass of Chandrashekhar Limit

3
Looking for help in understanding how black holes can move
2
Does gravity bend light, and how much time does it take for light to cross gravity of a Black Hole?
4
Stellar mass limits for Neutron Star and Black Holes
3
How well supported are the theories of black-holes containing their own universes?
5
Can we discern black holes with visible light?
2
Complex life in binary black hole - Sun(s) system
2
A question related to black holes
3
Is the angular size of the black hole in the movie “interstellar” completely overblown?