How would Earth's climate differ if it's axis were tilted around 90 degrees like Uranus? [closed]

As the title states, what would the effect on Earth's climate be if it's axis were tilted approximately 90 degrees like Uranus?

I'm specifically wondering about the effects on seasons, temperature, and life on Earth. However, I'm happy to hear about other effects as well.

This is a good question, and has been somewhat a topic of study by a few. So below is some consequences of if Earth had a tilt like that of Uranus (for this explanation, I am disregarding the wobbles in the Earth's current axis, just focussing on the 90 degree axis):

According to the article Not All Habitable Zones Are Created Equal (Moomaw, 1999), each day and night would be 6 months each (including an epically long dusk and dawn), with daytime temperatures reaching up to 80C, but the night time side may not reach freezing - owing to the time to take to cool down from the 6 month day. Parts of the equatorial regions would be, however, permanently encased in ice.

Pretty much like this diagram of Uranus' rotation (from Source: University of Hawaii: 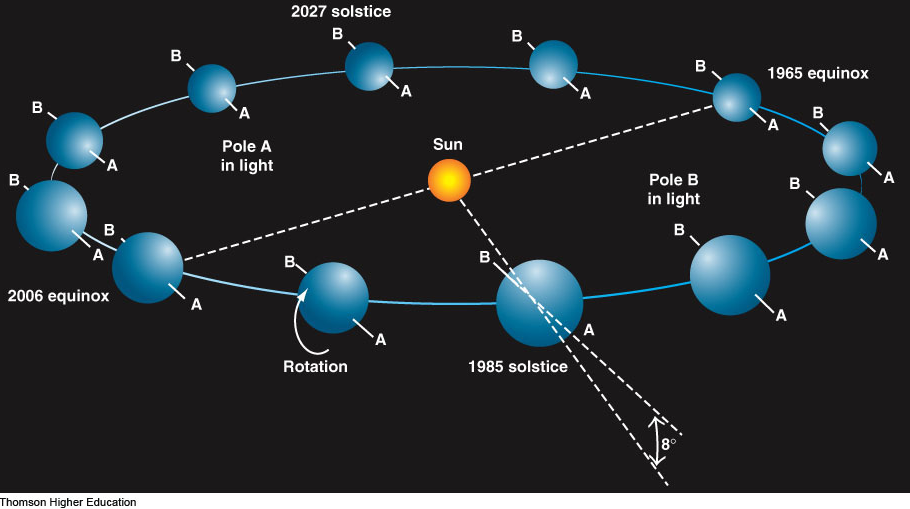 A major consequence of this according to the author is:

In such an environment, life could almost certainly still appear, but it would have much more difficulty evolving into forms that could survive such grotesque temperature extremes -- which would greatly slow down its evolution into more complex forms, maybe by billions of years.

Interestingly, the authors claim that if the Earth had an axial tilt of 90 degrees, but at 210 million km from the sun, then:

its climate would be positively balmy -- the equator would be 11 deg C (52 deg F), and the poles would never rise above 46 deg C (115 deg F) or fall below 3 deg C (37 deg F). Earth would have no ice anywhere on its surface, except on some of its highest mountains.

According to the article High Planetary Tilt Lowers Odds for Life? (Hadhazy, 2012), has a great way of putting it:

"Your northern pole will be boiled during part of the year while the equator gets little sunlight," said Heller. Meanwhile, "the southern pole freezes in total darkness." Essentially, the conventional notion of a scorching hell dominates one side of the planet, while an ultra-cold hell like that of Dante's Ninth Circle prevails on the other.

Then, to make matters worse, the hells reverse half a year later. "The hemispheres are cyclically sterilized, either by too strong irradiation or by freezing," Heller said.

They also describe that if life were to evolve, extremophiles (specifically, thermophiles) would be dominant - seasonally.

Not the answer you're looking for? Browse other questions tagged earth rotation climate or ask your own question.

0
How would seasons at the equator be if the Earth were tilted 90 degrees?
2
If the tilt of the Earth changed, would the tropics latitude change too?

26
What is the accepted theory as to why Uranus' axis is tilted so severely?
6
Is axial tilt critical for life?
6
Ambiguity in Earth's “Tilt”
0
What is the shape of the Sun's orbit around the Earth taking into account elliptical orbits?
9
Why do Uranus' and Pluto's moons orbit the equator? What makes a moons' inclination tilt with the rotational axis of their planet?
1
What effect does Earth losing a part of its mass have, is there an impact on the Earth's orbit around the Sun?