I am standing in an open area and can see the sky for a full 360 degrees. I have the coordinates of an object (RA and DEC). Where do I look to find RA 0?

In northern hemisphere, when looking at Cassiopeia (sometimes referred to as the "W"), it’s rightmost brightest star "Caph" (Beta Cassiopeiae) is almost at 0hr RA. 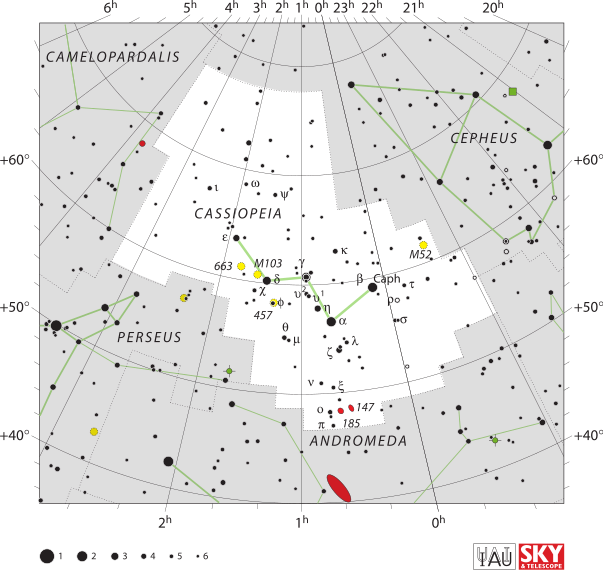 If you are able to follow the celestial equator to the point known as the vernal equinox, 0Deg RA is at the intersection point, with RA increasing directly east. The vernal equinox can be found at the first point of Aries, on a celestial sphere it is the point where the Sun crosses the celestial equator from south to north during the March equinox. The point during the March equinox is located in Pisces.

There are methods to determine the vernal equinox at other times, which can be dependent on location and the time. A great way that I personally use, is the same method as 'star hopping'. Using reference points, you can generally determine a line of sight between two or more points, for example if you are aware of a point and it's approximate RA, you can follow the path through another known RA point and evaluate the distance between the points. Following the line of sight you can them determine how far along the line the point of 0 would be, using this method takes much practice and you could even use visual guides such as a thumb as a measuring tool.

Using my thumb, I can say held at .5 meters is equivalent to 2.5 degrees, using stars as reference points I could approximate the line of sight and have a reliant measuring tool to judge distance.

The method you may require, could be entirely dependent on the reason you need to determine the point. If using electronic devices you can follow the celestial equator west along the celestial equator to find the point etc. I can explain other methods in more detail if required, others may have developed their own methods also.

I'd suggest a good star atlas and look for stars that are close to that meridian. Depending on how accurate you want to be you can use a telescope to get closer (ie to observe stars that are not visible to the naked eye).

But what is it that you are trying to do? Set setting circles on a telescope? You don't need to look for RA=0h0'00" then - simply look for an object with a known RA and Dec.

It depends on the your current date, time of day and your location since, from your point of view, Right Ascension (in hours) is always progressing in the same direction as the stars are moving. Remember that RA "0" is the same as RA "24" and is a line that runs from the north celestial pole to the south celestial pole. If we are trying to find the actual "line" in the sky that corresponds to RA "0" we have a couple of options. One is to obtain a star chart, find any star that is on that line, locate it in the sky and you are there. If you can't find a star chart, figure out the "Local Apparent Sidereal Time" (LAST) which will be the same as whatever RA is directly overhead (at your location) at that moment and you can estimate from that or wait until your "LAST" time is "0", at which time it will be directly overhead. Star charts as well as your current "LAST" time can be found directly on many astronomy smartphone apps or can be calculated (another question).

In the Southern Hemisphere, the Southern Cross (Crux) lies at approximately 12.5h RA. You can use the pointer stars (yellow) to locate the south celestial pole, and then continue the line from Crux (blue), perhaps bending it clockwise a little, as a rough guide to the location of 0h RA (green). 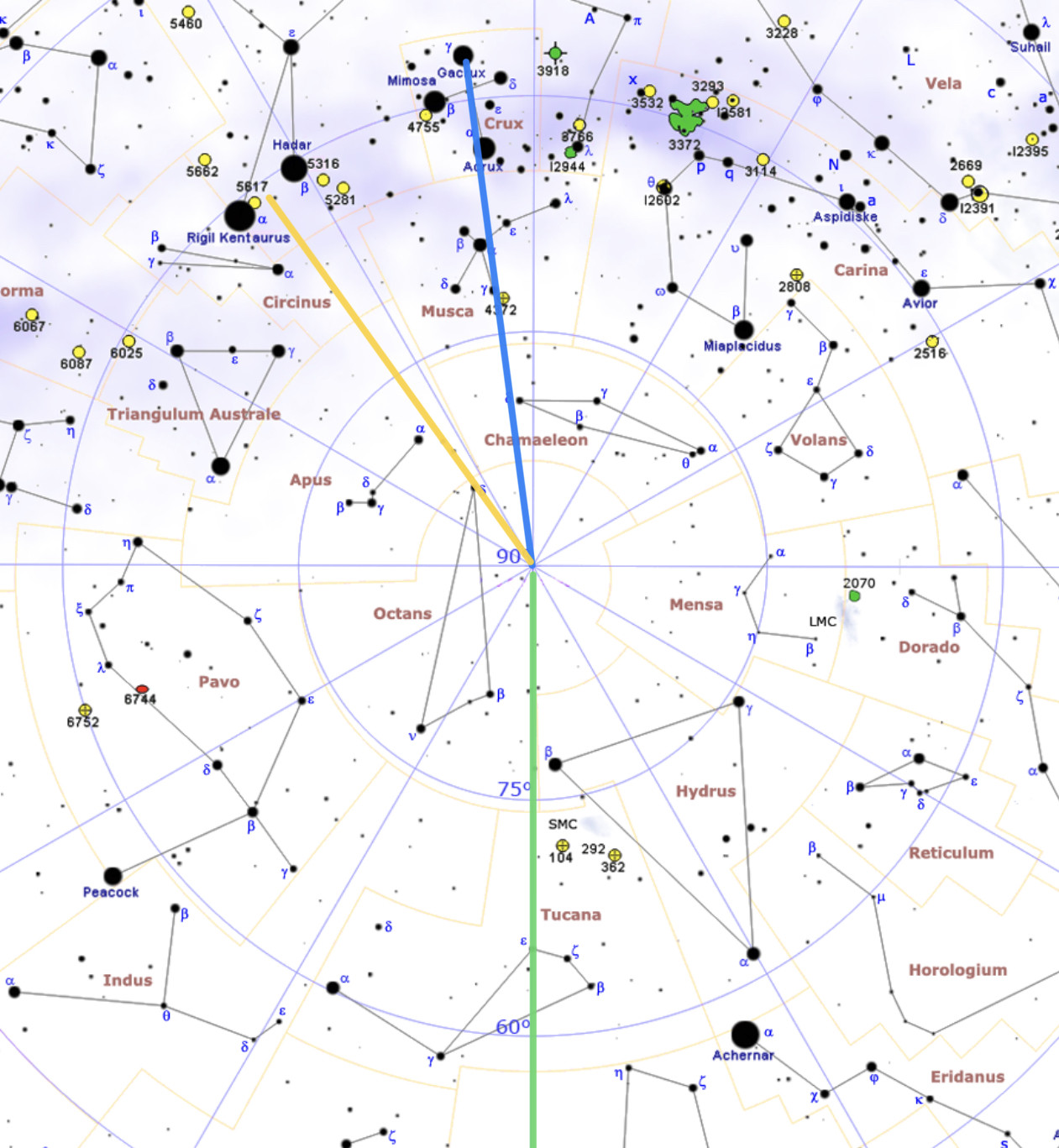 2
Need help with the calculations/conversion of a celestial object
0
Knowing the RA/DEC of a star how do I locate a star from ground?
1
How can we estimate if a certain astronomical object will be visible from a place on earth?
2
Actual meteor sightings formula
2
How does the Sky in Google Earth Pro work?
4
Which stars have I been seeing?
3
How difficult is it for an amateur to discover a new exoplanet or astronomical object?