Is there a cosmic, rather than technological, upper limit to what a telescope can resolve?

Space radio interferometers could have a baseline of millions of kilometers, but is there a point where a larger baseline doesn't improve the resolution anymore because the photons observed are distorted before they arrive? This question deals with technological limits of resolution. I'm instead asking about cosmic limitations due to for example interstellar and extragalactic gas which scatters light.

This paper about results from the RadioAstron space/Earth interferometer is well above my pay grade, but it seems to be about this problem. The executive summary says:

At longer baselines of up to 235,000 km, where no interferometric detection of the scattering disk would be expected, significant visibilities were observed with amplitudes scattered around a constant value. These detections result in a discovery of a substructure in the completely resolved scatter-broadened image of the pointlike source, PSR B0329+54. They fully attribute to properties of the interstellar medium.

Q: "Is there a cosmic, rather than technological, upper limit to what a telescope can resolve?

Space radio interferometers could have a baseline of millions of kilometers, but is there a point where a larger baseline doesn't improve the resolution anymore because the photons observed are distorted before they arrive?'

Deviation of the wavefront from a blackbody spectrum and the processes that create them is reasonably well understood, the phases of the incoming wavefronts can be measured to enhance the directionality and reduce the distortion. Correlation of the different frequencies allows detection of even small amounts of distortion.

The method is explained in the paper "Cosmic Microwave Background constraint on residual annihilations of relic particles" (9 Aug 2000), by McDonald, Scherrer, and Walker, page 2:

"In this paper we compute the energy injected into the CMB by annihilating particles as a function of their mass and annihilation rate (i.e., the product of cross section and abundance squared). We derive constraints on the particle properties by comparison with the observed limits on chemical potential ($\mu$) distortions, and Compton-$y$ distortions (§II). We compare these constraints to similar constraints obtained from the production of deuterium by photodissociation of primordial helium (§III.A), and from the diffuse photon background produced after recombination by extragalactic annihilations (§III.B), and annihilations in the Milky Way halo (§III.C).

We consider first the effect of annihilation products on the CMB energy spectrum. The distortion of the spectrum takes place in two steps: first the high energy annihilation products rapidly dissipate their energy into the background photons and electrons, and then the low energy background evolves more slowly in an effort to restore the Planck spectrum. The permanence of distortions produced after $z ≃ 10^6$ is simple to understand in the following way: A Planck spectrum with a given photon number density must have a specific energy density. For $z ≃ 10^6$, photon nonconserving processes (double Compton scattering and bremsstrahlung) are inefficient in the background plasma. Therefore, if energy is injected into the CMB but not the the correct number of photons, a Planck spectrum cannot be restored. We now discuss in more detail the form of the distortions pro- duced in different redshift intervals. ...'.

See: "New Technology Offers to Broaden Vision for Radio Astronomy". Even a tiny antenna is very capable, this tiny antenna can see in seven directions simultaneously: 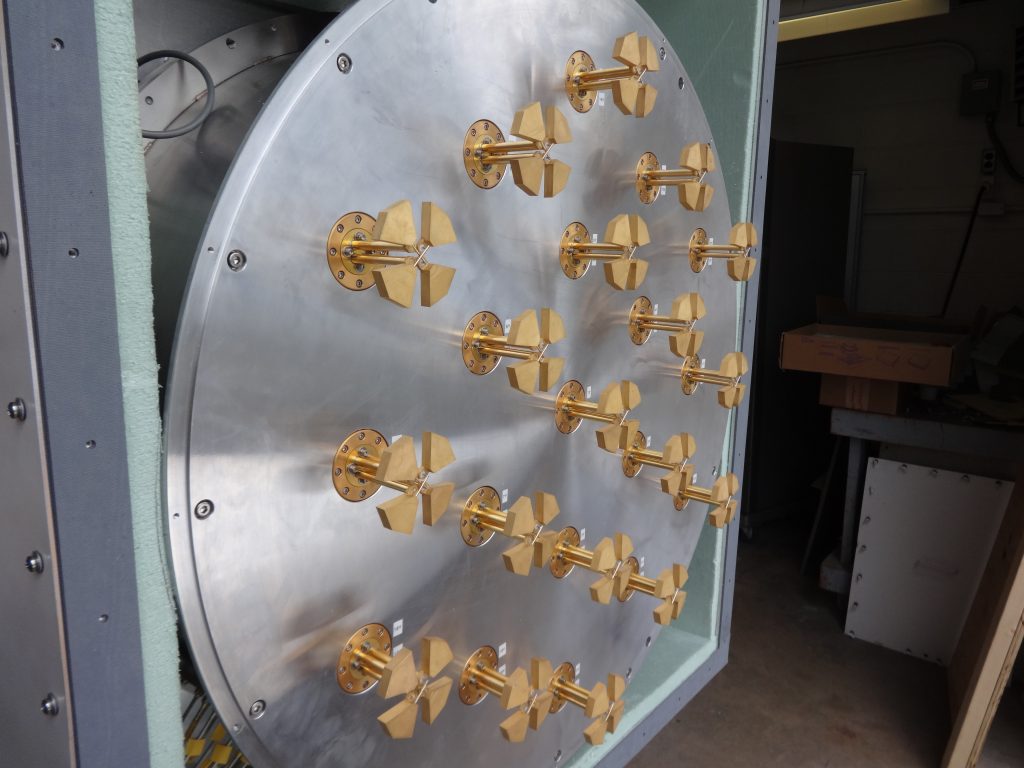 Adaptive optics are used with some optical telescopes, no reason not to apply the same algorithm to VLBI.

A major challenge in astronomy is the struggle to observe objects with an angular resolution sucient to probe the underlying physical mechanisms. The longer wavelengths of radio-astronomy initially made the quest for high angular resolution more difficult, but the relative ease of preserving phase information enabled the technique of Very Long Baseline Interferometry (VLBI). Intercontinental VLBI routinely achieves milliarcsecond-scale angular resolutions, and extending the baselines between telescopes into space, with satellitebased telescopes, currently yields the highest angular resolution achieved in astronomy.".

There's a newer paper than the one you linked to, using a longer baseline, with better results. See: "PSR B0329+54: Substructure in the scatter-broadened image discovered with RadioAstron on baselines up to 330,000 km" (13 Sept 2016), by Popov, Bartel, Gwinn, Johnson, Andrianov, Fadeev, Et al., the conclusion on page 8:

Here we summarize our observations and results and give our conclusions.

(ii) Visibility function at short ground-ground baselines manifests a single bright spike in delay-rate space that vanishes on long space-ground baselines. Thus, the scattering disk of PSR B0329+54 was completely resolved on ground-space baselines of 15,000 to 30,000 km. The FWHM of the angular diameter is 4.8 ± 0.8 mas at 324 Hz.

(iv) With the assumption of turbulent and large-scale irregularities in the plasma, the effective scattering screen is located at d/D = 0.6 ± 0.1 or somewhat more than half of the distance from Earth to the pulsar.

(v) At longer projected baselines, up to 330,000 km, significant visibility amplitudes were detected, although none were expected from the scattering disk. They are scattered around a mean which stays approximately constant up to the longest baselines. This result indicates that substructure was discovered in the scatter-broadened image of PSR B0329+54.".

Q: "I'm instead asking about cosmic limitations due to for example interstellar and extragalactic gas which scatters light."

Because you are looking at so many frequencies from so many angles for an extended period of time it's possible to use a supercomputer to see through (around) atoms, fog, dust.

Here are some layperson's explanations:

Not the answer you're looking for? Browse other questions tagged telescope radio-astronomy space-telescope angular-resolution or ask your own question.

3
What would be the maximum theoretically possible angular resolution?

19
Is there any telescope on Earth that can see the lunar rovers on the moon?
5
What can a lunar-based telescope do?
2
Can angular information be known more precisely than the diffraction limit?
2
What is the faintest magnitude a telescope can see?
2
what can I see with this telescope?
5
What can we expect to see with a telescope with a 70mm aperture and a 10mm eyepiece?
3
What I can observe with a 80/900 refractor telescope? What can I study?
2
Will the Magdalena Ridge Optical Interferometer be able to image extended objects like the surface of the Moon?
3
What could I resolve with my Telescope
0
Why is space-based VLBI scattering sub-structure “Hopefully, a new promising tool to reconstruct the true image of observed background target(s)”?