How much magnification is needed to see the planets of solar system?

I have a 3inch Newtonian reflector telescope with 300 mm focal length. I can use highest magnification of 75x using a 4mm eyepiece. But in 75x I can't see the details of Jupiter what was expected. Instead I see a little blurry image. Now I would like to know how much magnification is necessary to see a good details of Jupiter and other planets. And one more question: Is there any way to improve the vision of my 3 inch telescope?

As a general rule, there isn't much point in pushing the magnification above 2x the diameter of the instrument, measured in mm. 3 inch, that's 75mm, that's 150x max. Beyond that limit, even under ideal skies the image is large but blurry.

After that, seeing (or air turbulence) pushes that limit further down. Your aperture is small enough that it almost never suffers from seeing, but larger instruments are often affected. It varies greatly with time, place and season. There are times when a 12" dobsonian, that in theory could do 600x, is clamped down by seeing to 150 ... 180x. There are times when you could take a 20" dobsonian all the way up to 1000x - but that's very, VERY rare, it's the stuff of legends.

Assuming average seeing conditions and instruments of usual size (refractors of 3...4" aperture, reflectors 6" or larger), here are some rules of thumb:

Jupiter is seen best under mid-high magnification. It's rare that more than 200x is beneficial. This is because it's a very low contrast object, and additional magnification comes at the cost of less contrast, which makes things worse.

Saturn works best at high-ish magnification, bit more than Jupiter but maybe not much more. Around 200 ... 250x usually works. It depends on what you do - if you're trying to see the ring divisions, push it a bit higher.

Mars can use the highest magnification that you could generate, given the instrument and the conditions. It's a very small object, contrast is not bad, so crank it all the way up. Most instruments are limited by seeing when observing Mars.

Moon is the same as Mars.

That being said, I believe it's not magnification that's giving you trouble, but the general condition of the optical stack that you're using. These are things that are extremely important, and yet are ignored by many, many amateurs - and the results are not optimal. Here are a few things that you should investigate:

Is your scope collimated? In other words, are all optical elements aligned on the same axis? The likely answer is no. It makes a huge difference in the scope's performance, especially for planets. Here's a collimated scope, compared to the same scope out of collimation: 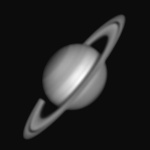 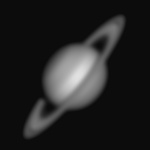 Further information on Thierry Legault's site, which is extremely informative.

A series of articles and documents regarding collimation:

Gary Seronik: Collimation Tools: What You Need and What You Don’t

Note: Some telescopes (e.g. pretty much all refractors) do not require collimation; they are collimated from factory and hold collimation pretty well. But most reflectors (SCTs, all newtonians including dobsonians, etc) do require this periodic maintenance.

At 3" aperture, this is probably not a big issue, but there's no reason why you should add another problem to the existing ones. Your scope should be at the same temperature as the air around it, otherwise its performance decreases. Take it outside 1 hour before you start observing, and that should be enough for you.

Larger telescopes (around 10" ... 12" and larger) should use active ventilation for better cooling (a fan on the back of the mirror). More details here:

In your case, simple passive cooling for 1 hour should be enough, but it's worth reading those articles.

A 3" scope, at 300mm focal length, that's an f/4 instrument. That's a pretty steep f/ ratio. Most eyepieces will not do well with such a blunt cone of light, and will start to exhibit aberrations that blur the image. Only very expensive eyepieces work well at such low focal ratios - things like TeleVue Ethos, or Explore Scientific 82 degree eyepieces.

Try and keep the planet in the center - most aberrations are lower there. Even very simple eyepieces do better in the middle of the image.

Look at the stars. Are they tiny and round in the center, and large and fuzzy at the edge? Those are aberrations from various sources (eyepiece, primary mirror, etc).

Of course, at f/4 even the best eyepieces out there cannot do anything about coma - an aberration coming out of any parabolic mirror, which becomes pretty obvious around f/5, very obvious at f/4, and a major problem at f/3. Again, coma is zero in the center of the image, and increases towards the edge.

A coma corrector is used in some cases, such as the TeleVue Paracorr, but I strongly recommend that you DO NOT use one - I suspect your instrument is aberrating in ways that overwhelm coma anyway. Jupiter would not be too blurry even at full f/4 coma at the edge. This paragraph is for informational purposes only.

Coma should become a concern with large telescopes, using high quality optics, with a focal ratio of around f/5 and less. E.g., you have a 20" dob with an f/4 mirror, then you should worry about coma - provided that collimation and so on are taken care of.

An f/4 parabola is not super easy to make at any size. I've made my own optics, and the lower the f/ ratio, the more difficult the process is. Many small, cheap telescopes are made in a hurry, and the difficult focal ratio poses additional problems - as a result, many manufacturers do a poor job. There are even cases where the primary mirror is left spherical, with disastrous results.

This is something you can do nothing about. If the primary mirror is bad, then that's just the way things are. An optician might try to correct it, but it's a difficult process, and quite expensive. I only added this here so you are informed.

This is what I would do in your case:

I would take the scope out 1 hour before observing, every time.

When collimation is at least partially under control, I would learn how to properly focus the scope. Seems simple, but it can be tricky. Use a bright star, and try and make it as small as possible. Use the Moon when it's visible, and try and make it crisp and clear. Do not try this with a miscollimated scope, since it's pointless.

After a few months, when I gain confidence that the scope is in better shape, very well collimated, very well focused, I might try to borrow a better eyepiece from a friend. I said borrow, not buy. Something like a 3 ... 4mm eyepiece, good quality, that would give me a comparison for the existing eyepieces. This ONLY makes sense with a scope that is in perfect collimation, perfect temperature, perfect focus. If an improvement is seen, then get a better eyepiece - but do not spend hundreds of dollars for an expensive eyepiece that will then be used in a tiny cheap scope. Second-hand eyepieces often work exactly as well as new ones.

If you know someone in your area who makes mirrors, see if they agree to put your primary mirror on the Foucault tester, and assess its condition. But beware: the results might be very disappointing. Or not. You kind of never know with these little scopes.

EDIT: After the scope is collimated and so on, you could try to increase magnification by using a 2x barlow with your eyepieces, but do not expect miracles - the image will be bigger, but probably rather "mushy". More magnification is not always better, there's always a trade-off.

Good luck, and clear skies to you!

In typical seeing condition you should be able to use a magnification (see here) of about 25-30x per inch of apperture, so for your telescope that is about 100x, in exceptional condition you could push that up to maybe double that. Also the more magnification you use the less contrast you will have in the image, so really you want the lowest magnification that gives an image size compatible with being able to see the bands since you will be contrast limited.

I am guessing that your telescope is this

0
what should be the minimum magnification of the telescope to see properly the cloud(red spot) of jupiter?
6
Which lens and magnification is best to see planets?
5
Question about Telescopes , observations and explanations of the observations
3
Beginner looking for extra eyepieces for telescope
1
Planetary observations: what to expect from the Powerseeker 50AZ?
1
Amateur observing
0
what kind of telescope eyepieces is best for viewing planets up close

3
How do I see more than just points in the sky?
6
Which lens and magnification is best to see planets?
4
Why does any planet look like a (not so) big white ball through my telescope?
7
Eyepiece diameter for small focal length planetary viewing on a large dobsonian?
1
76mm reflector vs 70mm refractor? Both are at sale at $200
2
DSO in a 60mm telescope
2
What is the magnification of my new telescope?
2
Eyepiece recommendation for Orion XT8
3
Not getting quality images in telescope
2
Does humidity affect image formation point while observing through a telescope?