Note 1: I've studied downvoted questions and decided that I either asked too many questions or I sound like I'm setting a fantasy world. So I'm editing my question accordingly.

Note 2: I'm a language teacher. I learnt equations with variables but that was over 20 years ago and I remember little of it; I never learnt trigonometry and other more advanced maths, that's a fact, but if there's no way around it I'll do my best to tackle it.

Note 3: My approach to understanding eclipses, due to the above stated handicap, is removing all the complicating factors (namely, the axial tilt and the moon's 'ondulating' orbit). I assume that, if I can fully understand such a simplistic scenario, I can then follow the mechanics of the real Earth scenario.

Therefore, I have written below the points I am confident are true. The ones I don't know are asked as questions (Q) and formatted in bold.

If this question is still not ideally adjusted, please leave a comment so I can further improve it.

Incorrect. Even if the Earth had no axial tilt and the Moon had an equatorial orbit, that doesn't mean that every new moon would be a total solar eclipse. Yes, the moon would always generate some kind of an eclipse at every new moon, but it's orbit shape hasn't changed -- it's still an ellipse. It's further at some points in its orbit and closer at others. When it's further away at new moon, it appears smaller than the sun in the sky, making an annular (ring) eclipse, not a total eclipse.

For the same reason as (1), the path of totality would vary from a maximum amount down to nothing. For annular eclipses there would be a similar path of annularity instead. But whichever path it is would always be centered on the equator.

I'm sure that there are formulas that would predict which areas would be in the path of totality/annularity, but they would not be simple. They would depend on exactly when new moon occurs and the exact distance of the moon from the earth. That would control which strip along the equator would see the eclipse and how wide it would be. Because the moon slows down in its orbit when it's further away from the earth, and it speeds up in its orbit when it's closer to the earth, the time between new moons is not constant. The fact that Earth's own orbit around the sun is also elliptical, and it also slows down/speeds up when it is far/close from/to the Sun complicates this as well.

Again, because of the elliptical orbit of the Moon, the length of totality or annularity still can vary. Even during a single eclipse, the length of totality depends on your exact location on Earth. Your exact location determines your exact distance from the moon during the eclipse, which will vary depending on whether the Moon is getting closer/farther and how fast. There are formulas for calculating this, but I'm sure they are quite complicated even with the moon orbiting over the equator and with Earth having no axial tilt.

Generally, the closer you are to the equator, the more the sun would be covered. But this would vary slightly depending on the distance of the Moon from the Earth, and it wouldn't depend solely on your latitude. As Gerald points out, the moon's shadow, in which you would see a total solar eclipse, is cone-shaped. Different points on the Earth close to the equator would experience a different cross-section of the cone, which may be narrower or wider depending on your exact location. Where the eclipse is partial, the apparent size of the moon would control how much of the Sun is covered. A further-away moon would appear smaller in the sky and thus cover less of the Sun. Close to the borderline where the Moon appears to graze the Sun, the Moon may miss the Sun entirely if it's far enough and it appears small enough. 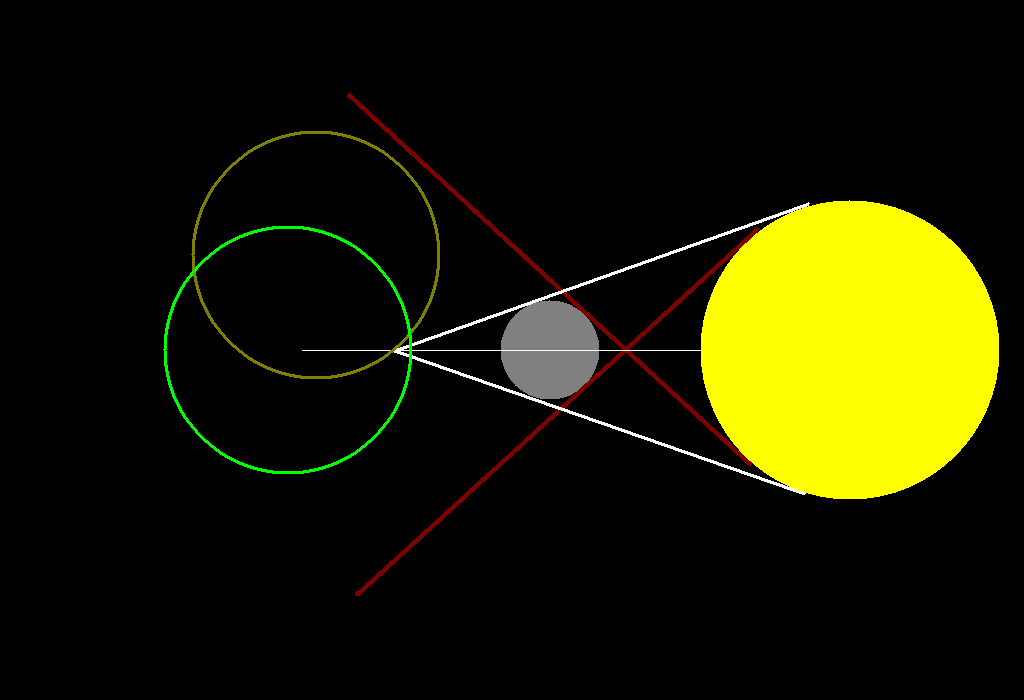 Not the answer you're looking for? Browse other questions tagged solar-eclipse lunar-eclipse .

14
Why does the darkening of the Moon go from left-to-right during an eclipse?
2
Why does the eclipse in this video look annular?
4
When the moon eclipses the sun what direction is darkened first: left or right?
1
2017 Eclipse intersection with I-95
6
Might someone see changes to the corona during a solar eclipse?
4
What irradiance does the Moon receive during a total lunar eclipse?
3
Why can't we observe a solar eclipse and the preceding/following lunar eclipse from the same place?
1
Can a single location on earth witness solar eclipse totality 2 times during a single eclipse event?
4
What is the duration of the era during which it will be possible to perceive a total solar eclipse?