How many galaxies are there in the Hercules–Corona Borealis Great Wall?

I'm sorry for the long answer. The result is in the bottom. :)

The number of galaxies in the "wall", as in any volume of space, is the number density $n_{\mathrm{gal}}$ times its volume $V_{\mathrm{wall}}$. However, the number density of galaxies depends on their masses/sizes: Small galaxies are much more common than large galaxies. Usually we describe this by the halo mass function (HMF), which gives the (differential) number density dN/dM of dark matter halos hosting galaxies as a function of halo mass M. Depending on your favorite cosmology, it looks something like this (created with this tool): 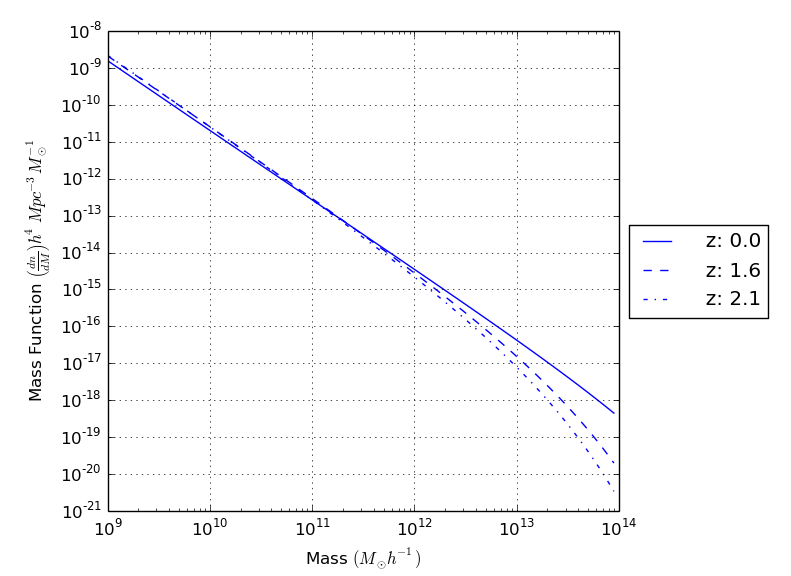 The solid line shows the HMF today in the local Universe, i.e. at redshift zero, while the dashed and dotted line shows how it was at redshift 1.6 and 2.1, respectively, roughly 10 billion years ago, which mark the beginning and end of the wall (according to Horváth et al. 2014, A&A, 561, L12). Notice how the number of large halos grow with time, at the expense of small halos. This is due to the smaller ones accreting onto larger ones.

The HMFs are characterized by a power law at low masses with an exponential cut-off at high masses. To get the total number density we need to integrate over the entire range of masses, and here comes the problem: Whereas the upper limit is set by the maximum size a galaxy can have (roughly $3\times10^{13}M_\odot$, but the exact number isn't very important, as these galaxies are so rare), the lower limit depends on your definition of a galaxy. Large galaxies have smaller galaxies orbiting as satellites, and there isn't a well-defined threshold for when a clump of gas, stars, and dark matter is called a galaxy. These guys report on the detection of a $\sim10^3M_\odot$ clump which they call a galaxy. That's probably not what you think of as a galaxy, so for the sake of this exercise, let's use Small Magellanic Cloud-sized galaxies as our lower minimum, i.e $\sim 6.5\times10^9 M_\odot$. 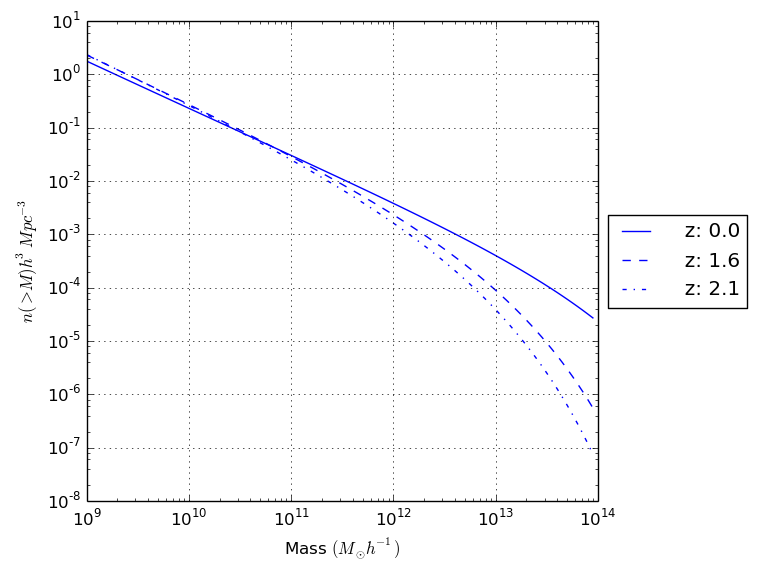 The wall starts at redshift ~1.6 and ends at redshift ~2.1. This translates into starting at a distance of 4.65 Gpc (billion parsec) and ending at 5.47 Gpc, i.e. a depth of ~800 Mpc. These numbers are in comoving coordinates, i.e. what it has expanded to today, as opposed to physical coordinates, i.e. what it was at the time it emitted the light that we see today. But the HMF is given in terms of comoving volume, so that's cool.

To get the volume, we also need the area. The finders report that it's roughly 2 Gpc times 3 Gpc, but they don't seem to state whether this is in physical or comoving coordinates (which differ by a factor (1+z) ~ 3). I suspect it's comoving, though.

The considerations above are all for the average Universe. But the wall represents an overdensity in space, so the number will be larger. I can't find any estimates of the overdensity of this particular supercluster, but in general galaxies in superclusters are more numerous by a factor of $\delta \sim 5$–$10$. Let's use 5.

But if you go through the same exercise for halos of masses above, say, $10^3\,M_\odot$, you'll find a number which is a million times larger.

In reality, the number density of luminous galaxies is smaller. At the high-mass end, the gas has trouble cooling sufficiently to condense and create stars, and active galactic nuclei in massive galaxies heat the gas. At the low-mass end, gas is more easily blown out of the potential well by stellar feedback from supernovae.

16
Boötes Void numbers, 2016
3
Total number density of galaxies and problematic expression in practise
2
How many galaxies are predicted in the observable universe? Does it contain dwarfs? Is there any size-ratio diagram?

14
What is the ultimate fate of a cluster of galaxies?
12
How are Galaxy Super Clusters Generated
3
Are 3D coordinate data from Sloan DSS-III available & easily accessible to non-pros?
6
Would gravitational waves be subject to external gravitational perturbations?
1
How long will it be until the nearby groups of galaxies are receding at speeds faster than light?
3
Why is this Einstein ring pink?
1
Are there any predictions of what galaxies exist in the Norma cluster/ Abell 3267?
9
Local neighbourhood and Superclusters