How can I calculate moon phase and height?

How could I know what phase the moon is in when it's high in the sky during sunrise?

How could I tell in general what its height in the sky will be at any given time?

The first question is quite simple if you imagine how the Earth is looked from above. To help you with that I've added a little drawing below.

Probably you know that the Sun rises on the East and sets on the West. Imagine now how the sun illuminates the Earth: Europe is in the afternoon when the East cost of US is waking up. Imaging this you can see that the Earth is turning anti-clockwise if looked from the north.

Now, imagine you are somewhere in US (so we can use the drawing from below), the sun is rising (on the East) and the moon is above you (something close to the zenith). This means the moon the configuration of the Sun-Earth-Moon system is something like in the drawing. As you can see in the drawing I've kept in white what's illuminated from the Sun. In Spanish we use to say that the moon is a bit of a liar, this comes because it shows a C shape when is waxing (decreciente) and a D shape when is crescent (creciente), so just the opposite letter of its action (don't know if there's a similar expression in other languages, and notice that the moon is not a liar for the Spanish speakers in the Souther hemisphere). So, coming back to the drawing, you can imagine that from the red-star position you will see the moon with a C shape, therefore is waxing... which means in 7 days or so would be new moon so is going to move between the Sun and Earth.. and we can see how the moon rotates around the Earth in the same direction than the earth rotates around itself. 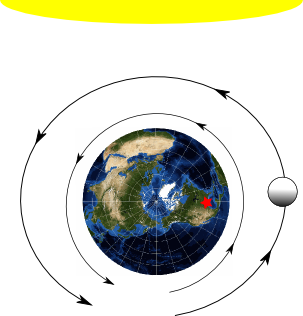 I don't really understand your second question, so I cannot help much with that. But, if you mean to get a roughly calculation as on where the moon is at a certain time knowing its phase you can calculate it by knowing that the Earth spins 15°/hour and that the moon positions for each phase. Therefore, new moon the moon will be closer to the zenith at noon (local solar time), 6am for waxing moon, 12 am for full moon and 6pm for crescent moon. However, this is just a roughly approximation as the moon movement happens on a plane which is 5.14° inclined from the ecliptic plane which corresponds to positions between 18.29° and 28.58° latitude on Earth. So the same phase moon can be at different heights at different times of the year at the same hour.

I highly recommend picking up a copy of Astronomical Algorithms by Jean Meeus. Chapter 49 covers the calculation methods that are used by many (if not most) online calculators.

The somewhat dated page at http://www.aphayes.pwp.blueyonder.co.uk/sun_moon.html has a link to "moon.js", the javascript that does its lunar calculations. The calculations you need are in that file.

6
Formulas to determine the illuminated phase and orientation of the Moon
6
moonless night and lunar phase
5
How to calculate geocentric conjunction time and moon altitude at a given time
4
How Soon Could a Waxing Crescent Moon Be Seen?
1
Struggling to understand the phases of the moon
3
How to calculate moon overhead and underfoot time?
2
How can the Earth and the Moon be in synchronous rotation if the Moon won't be in geostationary orbit?