What's the largest non-spherical astronomical object in the universe?

Some asteroids and comets are non-spherical. But is the nature of big things and gravity so that large things in the universe are always spherical? What is the biggest astronomical object in terms of volume out there that's not spherical?

The largest sub-galactic astronomical object (in volume) that we know of is the Carina Nebula, which is a non-spherical diffuse nebula. The Carina Nebula has a radius of about 100 parsecs.

The galaxy has a diameter of approximately 6 million light years, which makes it currently (as of 2013) the largest known galaxy in terms of breadth. It is the central galaxy of a massive cluster containing a mass (mostly dark matter) of roughly 100 trillion stars. Being more than 50 times the size of the Milky Way and 2000 times as massive

Here is an image from the Sloan Digital Sky Survey (SDSS) of IC 1101: 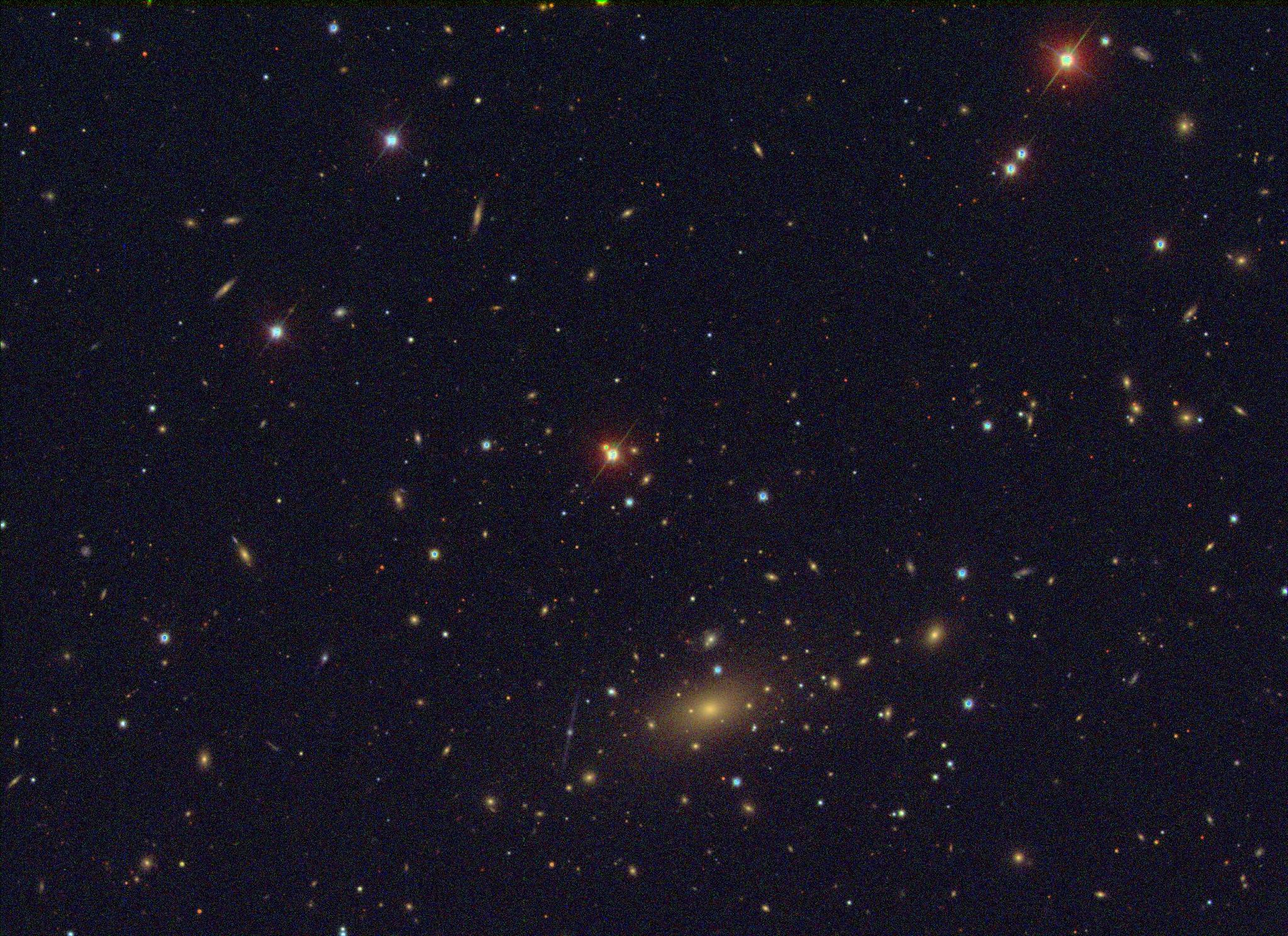 I'll leave it to you to decide if an elliptical galaxy counts as "spherical" or not.

If you don't count elliptical galaxies, the largest spiral galaxy is NGC 262, pictured below. It has a diameter of 1.3 million light years. 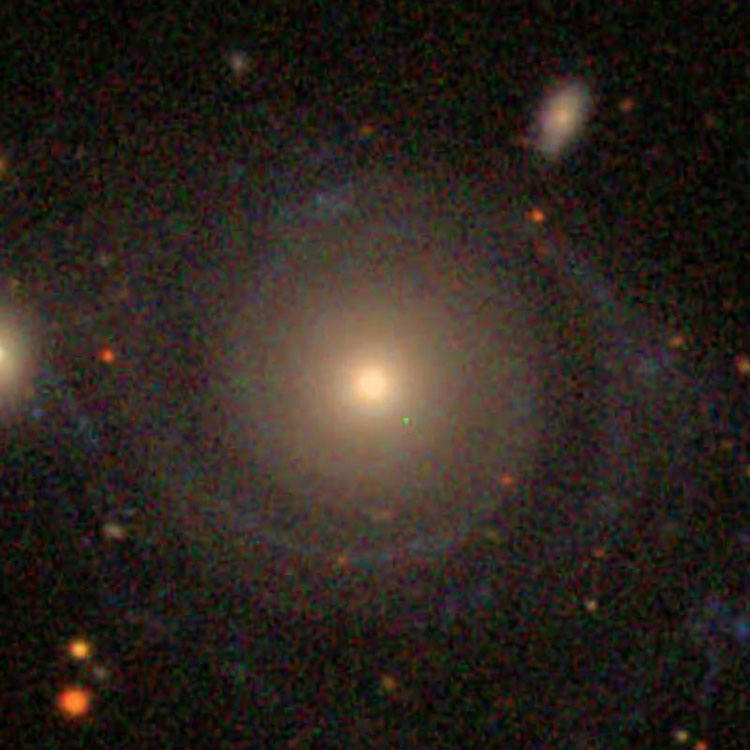 I think, by his mention of asteroids, that the OP means an object in the scale of asteroids or dwarf planets, that is, almost-solid objects. In this case, asteroids the size of 2 Pallas or 4 Vesta are ellipsoids, and smaller than that, we have 511 Davida which is the biggest clearly non-spherical asteroid: 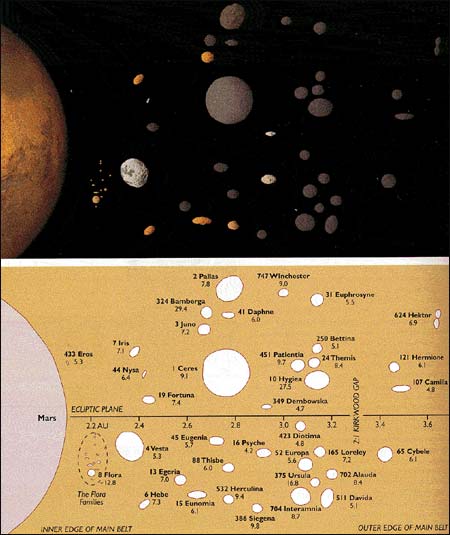 In the same vein as @arne's answer, this just in from Slashdot: Astronomers Discover Largest Structure In the Universe, linked article and the original - 10 billion light years across, based on data from gamma-ray bursts.

So this thing, presumably another wall of even more distant galaxies, is the new largest structure in the universe.

One of the fundamental tenets of cosmology is the Cosmological principle—this holds that the distribution of matter in the universe will appear uniform if viewed from a large enough scale.

At whatever scale they look, large scale structures always seem to emerge.

(I haven't seen a name associated with it yet.)

The largest non-spherical objects which are virialized (meaning essentially dynamically relaxed; not in the process of forming or collapsing) are super clusters of galaxies (here is a list of nearby super clusters). They're the most massive objects before you must begin to consider large scale structures like filaments.

These objects are largely non-spherical. Most of them happen to be tri-axial ellipsoids (either footballs, frisbees, or somewhere in between) due to the nature of large scale structure formation occurring along two axes at different times.

If you think tri-axial ellipsoids are just spheres squashed in certain ways (and that therefore clusters don't really count as "non-spherical"), then the answer would be filamentary structures (both the most massive, and the largest in scale). Here's an image from the Millennium Simulation to show what a super cluster would look like: 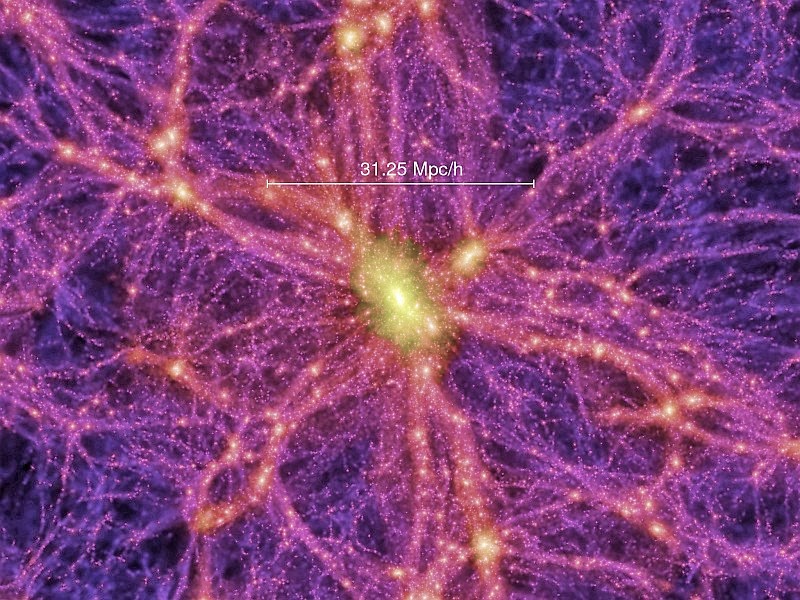 If you count conglomerates of galaxy style objects, the largest structure in the universe so far is the Huge Large Quasar Group.

It seems to be four billion ly in size, and contains dozens of Quasars, which in turn are very active galactic nuclei. 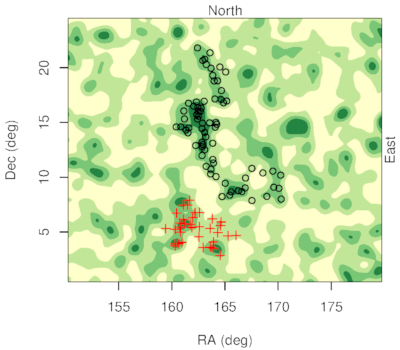 Let me see, some objects are listed because of their records. First, nebulae, which are huge clouds of dust and gas. The largest in the Milky Way's neighborhood is the Tarantula Nebula (30 Doradus, NGC 2070 or Caldwell 103).: 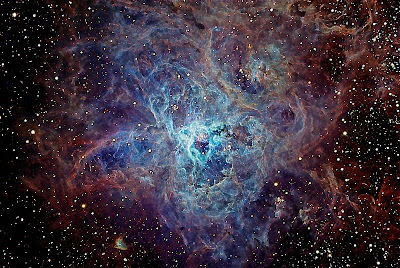 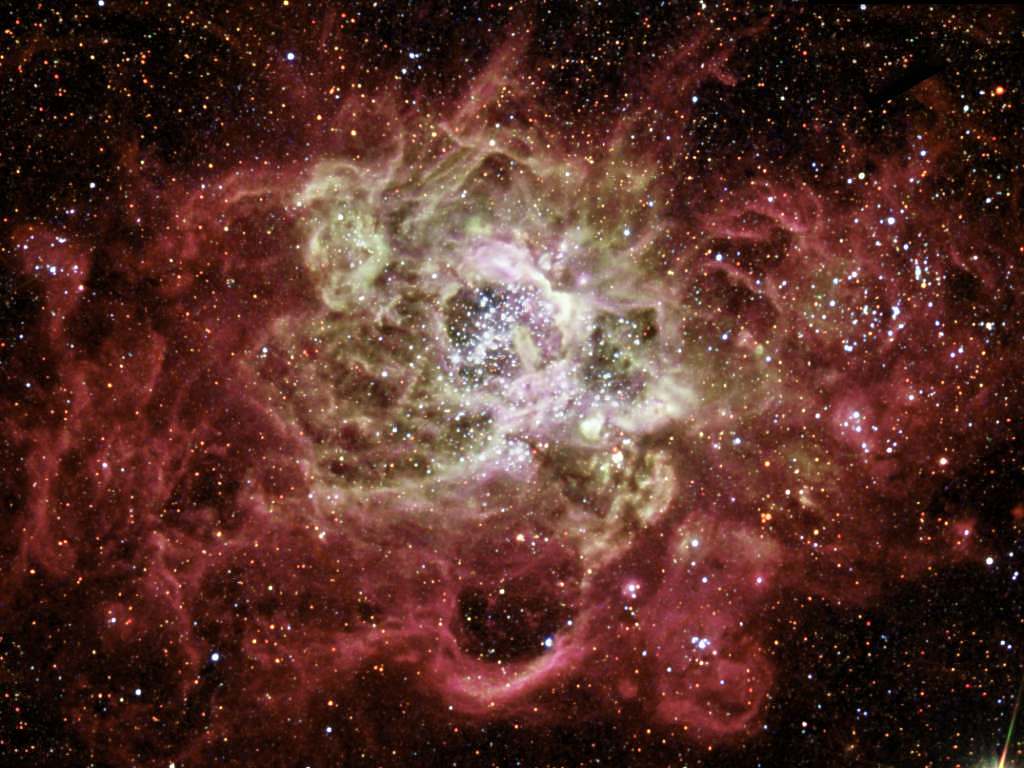 Next, galaxies, which come in different shapes. Spirals first, and what like called2voyage has said, is NGC 262. Because he can't provide a pic, I will!: 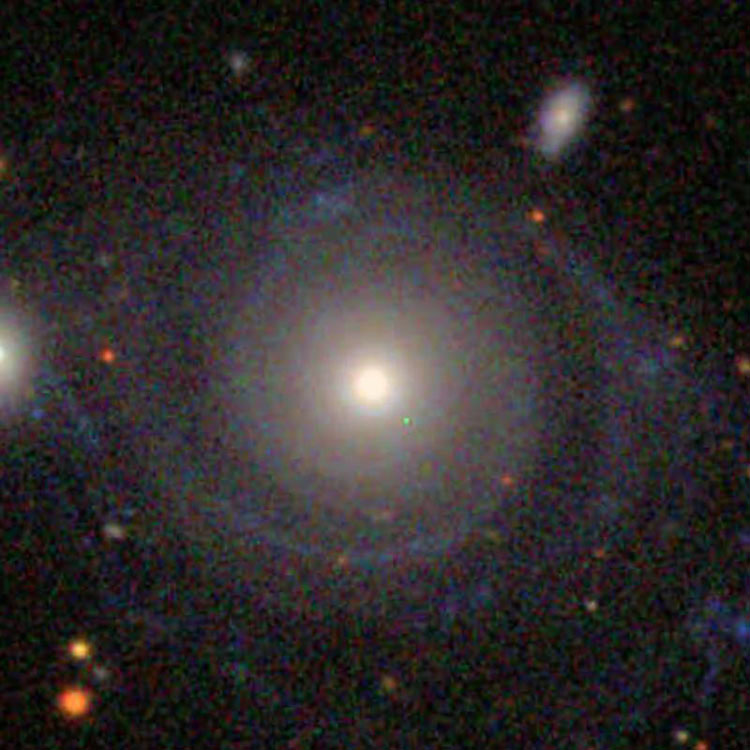 NGC 262 is a giant Seyfert spiral, and is 1.3 million light-years across, more than two times larger than the mistakenly clamed largest spiral last January 2013, NGC 6872.: 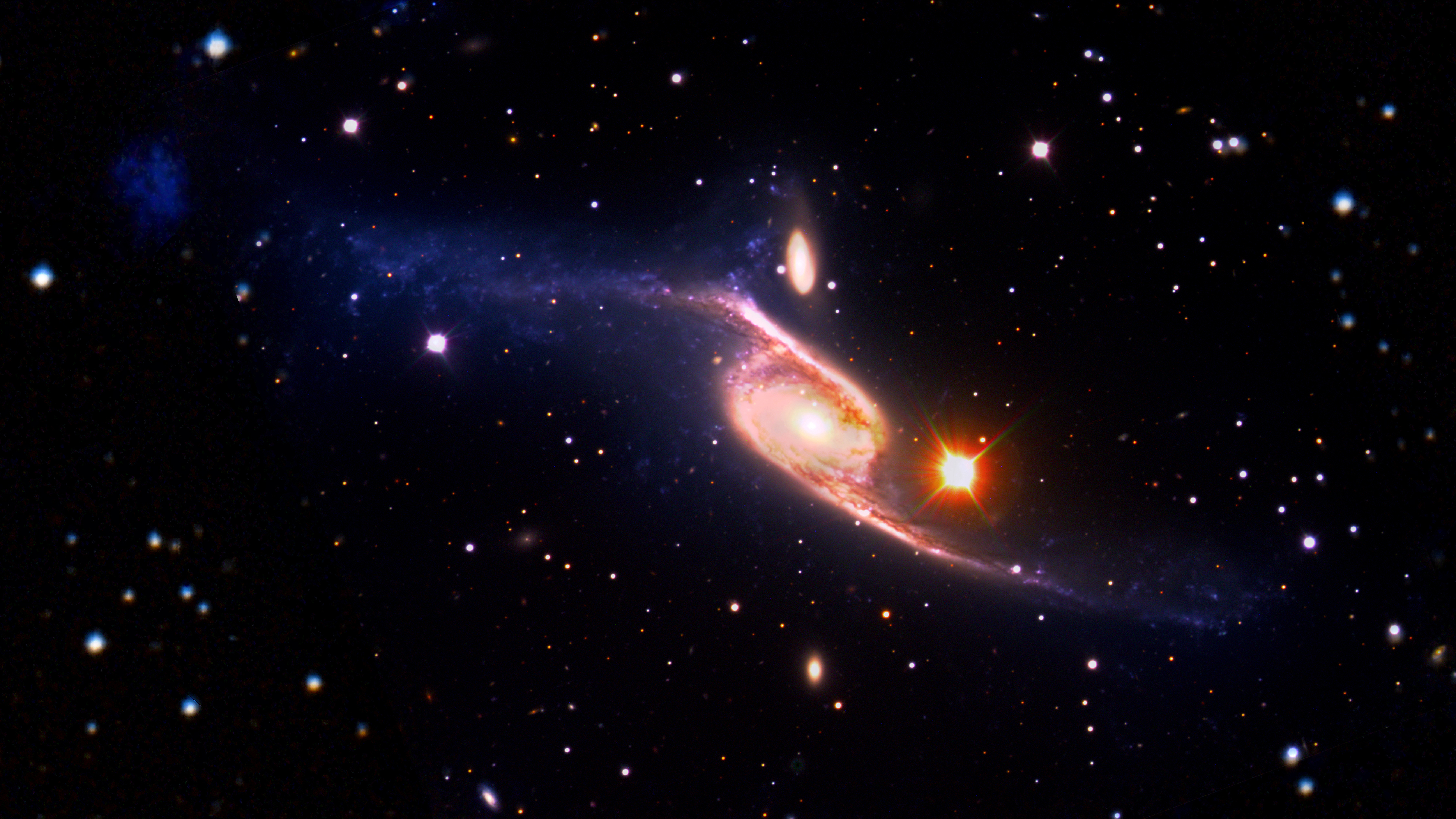 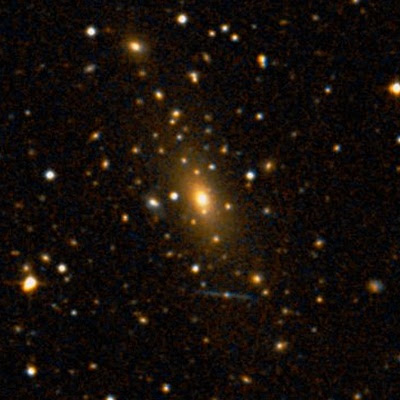 A size comparison of this monster: 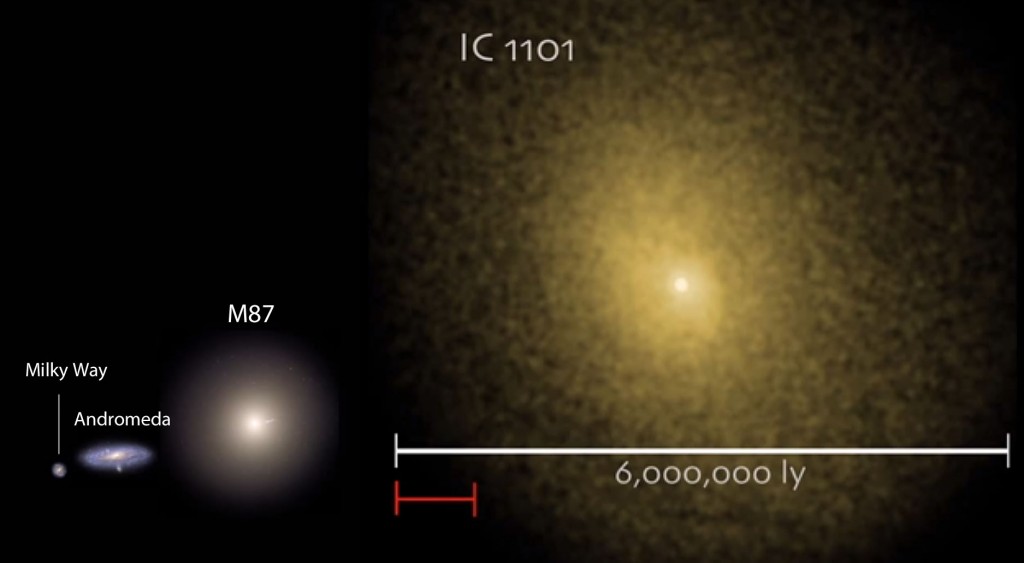 Next, structures. aneroid has the right answer. It's name is Hercules-Corona Borealis Great Wall, some 10 billion light-years across.

If the universe were closed, it's bound and hence the largest astronomical object ;-)

However, it appears the universe is expanding forever and hence not bound. The largest bound objects are galaxy clusters and galaxy super clusters. These objects have just formed or are still forming: the dynamical (orbital) time scale at their outskirts is comparable to the age of the universe.

Thus, the largest bound objects will be larger if you wait a few giga years ...

Warning: citations above about IC 1101 being the largest known galaxy are probably wrong! Wikipedia's claimed 5 Mly size is certainly incorrect.

The visible light extent is about 360 kly (NED's summary page gives a major diameter of 1.2' and a redshift of z=0.077947, for a physical size of around 115 kpc, or 370 kly). The largest measurement one could reasonably suggest for IC 1101 (around 500 kpc, or 1.5 Mly) comes from the maximal measured extent of the diffuse light from Uson, Bough & Kuhn (1991). That's not what one usually thinks of when talking about the "size" of a galaxy. Usually we refer to the radius in which most of the visible light is enclosed, not the maximum distance we could possibly measure light that might be associated with the galaxy.

To answer the question: I'd go with galaxy superclusters as being the largest currently gravitationally-bound objects in the universe.

The largest "complex, less cohesively bound structure, which may consist of multiple bodies or even other objects with substructures" known object is the Shapley Supercluster, which comprises 76000 galaxies. It is supossed that Laniakea (our own supercluster) moves towards it and both may be part of a bigger structure, yet to be confirmed.

Well, this is my relatively inaccurate size comparison of galaxies. IC 1101 is 6 million LY at this scale, NGC 263 is 2.3 million LY, and there are some other galaxies.

13
Why are planets spherical?