Assume that I am standing on one of the many satellites of Neptune. Will I be able to see the planet with my naked eyes (without any sort of visual aid).

If I was to stand on Moon I would be able to see the Earth because the light from Sun is reflected off Earth into my eyes and I am able to see Earth. In case of Neptune, the distance between Neptune and the Sun is so great that the sun would look like any other star (a bit brighter). In that case if I am looking at Neptune would I be able to see it ?

What about the other gas giants ?

NASA's Neptune fact sheet states that Neptune's irradiance is $1.51 W/m^2$. This is roughly three orders of magnitude less than at Earth (at $1367.6 W/m^2$). This sounds like a lot, and it is quite an attenuation. So much that for example solar panels for interplanetary probes are not worthwile at these distances from the sun.

However, if you compare this with the sensitivity of the human vision system, this seems still pretty bright. A sunny day outside will be approximately $10^5 cd/m^2$. So equally on Neptune a sunny day will probably be $10^2 cd/m^2$. This is comparable to an overcast sky, and still well within human photopic vision!

The perceived brightness of Neptune, as viewed from one of its moons, will not change, so yes, it will appear 1000 times less bright than earth does, but since you don't have any comparisons to brighter light sources there, you will perceive it as pretty bright!

As for the other gas giants, their surface irradiance will be equally higher, so they will in turn appear much brighter than Neptune.

I'm probably misunderstanding the question, but http://nssdc.gsfc.nasa.gov/planetary/factsheet/neptunefact.html notes that Neptune's magnitude from Earth is 7.8 at opposition, when it's 4347.31 million km away.

If you get 3 times closer, 1449.1 million km away, Neptune will appear 9 times brighter, bringing its magnitude to 5.4, well within our visible range.

As Stellarium notes below, Neptune is almost visible (magnitude 5.66) from Uranus, an entire planet away. 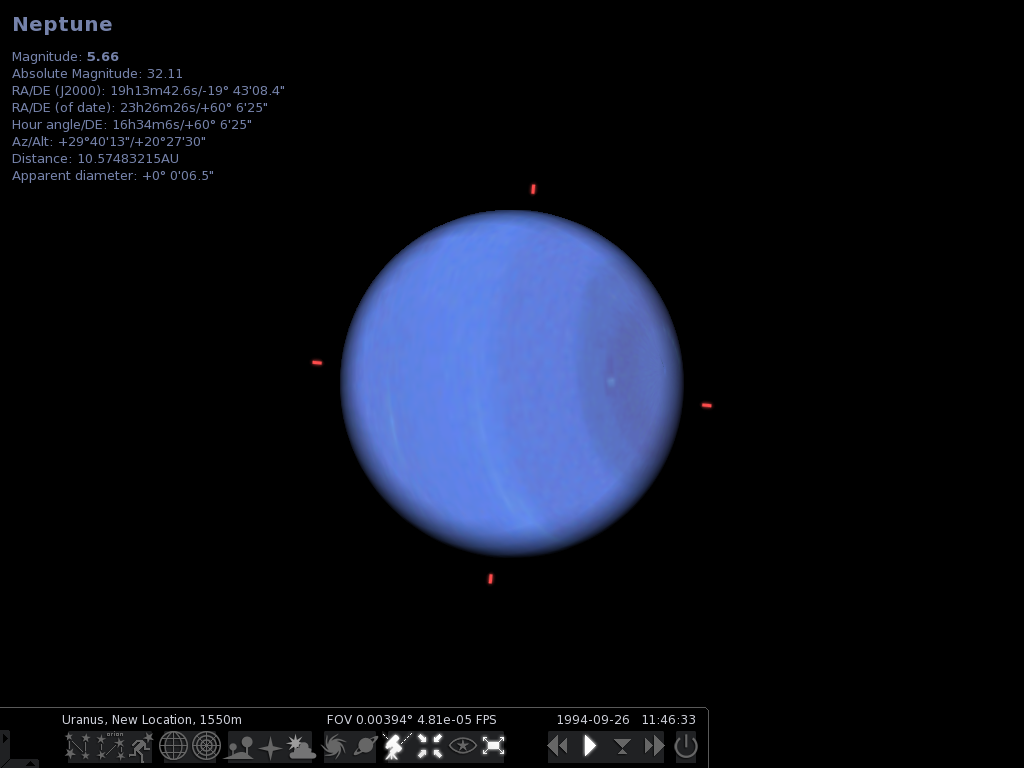 My version of Stellarium can't simulate the view from Naiad (Neptune's closest moon), but at a distance of only 48,227 km (Naiad's semi major axis), Neptune's magnitude would be almost -2, much fainter than our own moon, but brighter than Sirius appears to us.

This brightness would be spread out across Neptune's disk, but the brightness at any point would be about magnitude 3, still quite visible.

Moreover, Naiad probably has a much thinner atmosphere (and no light pollution), making Neptune even easier to see.

I haven't done the calculations for Pluto, which is technically no longer a planet.

Not the answer you're looking for? Browse other questions tagged the-sun neptune uranus or ask your own question.

0
What is the shape of the Sun's orbit around the Earth taking into account elliptical orbits?
7
Have there been successful attempts at spotting Neptune with the naked eye?
1
Do far away planets reflect light in the same way our moon/earth reflects light?
3
Does the lower mass of Uranus suggest it swapped position with Neptune?
13
Will just a glimpse (less than a second) of sun during partial solar eclipse damage eyes?
4
How bright is the Sun in S-band?
34
Can Pluto be seen with the naked eye from Neptune when Pluto and Neptune are closest?
12
Could Neptune be viewed with the naked eye from Uranus?
11
Can you see the shadow of a spaceship on the Moon while looking towards the Earth?