Thinking:
The distance between Sol and Luna is not constant, it fluctuates as Luna orbits Earth. Therefore the pull sunward also fluctuates. Shouldn't this cause all moon orbits to eventually deteriorate into longer and longer elliptical orbits until they collide with the planet they orbit?

The answer to your simple question is that while a circular orbit could remain in the absence of any other gravitational fields, in reality you'll have an ellipse and it can be stable from the beginning, remember stable has a wide range of values.

If you allow drag through tidal forces etc then the orbit will change, eg our Moon is slowly getting further away from us, but we still consider this stable over realistic timeframes.

Additionally, the actual orbit will track out a sort of helix as the planet travels round the sun.

A couple of points.

Thinking: The distance between Sol and Luna is not constant,

You're correct. While the 2 body system can (mathematically) remain perfectly circular, ignoring tides, gravitational lumpiness, etc, the minute you add a 3rd body, whether the sun or something much smaller, the perfect circle is no longer possible because the 3rd body stretches it. It creates a gravitational tug on the other 2 bodies. 3 gravitational body mathematics gets enormously complicated. See 3 body problem, so I won't get into that.

What you've assumed wrong is in thinking that the Sun or 3rd body makes the Moon's orbit elliptical. The circular orbit is already elliptical because a circle is an ellipse, just one with an eccentricity of zero.

Thinking: The distance between Sol and Luna is not constant, it fluctuates as Luna orbits Earth. Therefore the pull sunward also fluctuates. Shouldn't this cause all moon orbits to eventually deteriorate into longer and longer elliptical orbits until they collide with the planet they orbit?

This, again, not really, no. Orbital deterioration is complicated and it mostly requires more than just a 3rd body tug, even a large tug like the one the sun gives the Moon. What the large close sun does is it reduces the Earth's hill Sphere. Planets closer to the sun for the most part have smaller hill spheres (see table) and the inner 1/3rd or 1/2 of the Hill Sphere is long term stable, so the sun doesn't destabilize Earth's moon at all, it merely jiggles it.

Orbits within the stable part of a planet's hill sphere can get bent by the sun, but they remain stable. The reason is that the tugs tend to balance out over time. Sometimes the Sun will bend the Moon's orbit more eccentric and sometimes it will bend it back closer to a circle. The net effect doesn't accumulate.

The mathematics or orbital perturbations is also very complicated. Earth's Milancovich cycles are orbital perturbations, driven mostly by the influence of Jupiter and Jupiter is not expected to ever destabilize the Earth. While obviously many collisions have happened, by now, most of the orbits in the solar-system are long-term stable.

So, back to the moon and onto Tidal forces, The Moon is moving away from the Earth at about 3.8cm per year because Earth's tidal forces tug the moon forward in a sense, which speeds it up and as it speeds up it moves into a higher orbit. Eventually if the Earth's rotation was to stay constant, in about 50 billion years the Earth would eject the Moon out of it's orbit. Because the Earth's orbit is slowing down and because the sun is going to explode long before then. For both those reasons, the Earth is not expected to lose the moon.

Tidal forces can operate either way on pushing an orbital further out or closer in. Mars' tidal forces on Phoebos are drawing Phoebos closer to Mars and in time it will crash into the planet or break apart into a ring system and more gradually crash into the planet. The varying factor is whether the planet rotates faster than the Moon in which case the tidal bulge is ahead of the Moon and pulls it forward and away, or if the Moon orbits faster than the rotation in which case the tidal force is behind the Moon and slows it down, pulling it in. When objects become tidally locked to each other, the tidal forces are largely minimized.

So the Sun does tug on the Moon's orbit in the way you suggest and the Moon speeds up as it moves towards the sun and it slows down as it pulls away, giving it a lumpy orbit around the Earth. As the Moon moves further from the Earth it's orbit will grow more and more lumpy or chaotic, but it's not expected to ever get chaotic to the point that it will lose it's stability. 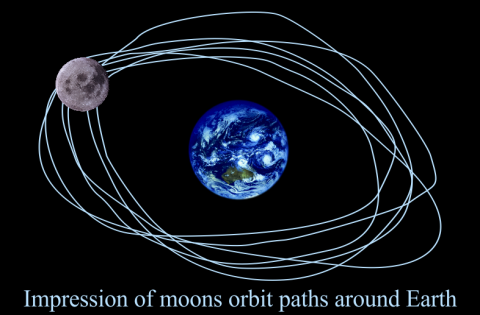 Below are 2 pictures of Mercury's "cool" orbit that kind of spirographs around the sun. This is a more typical 2 body orbit, notice how much neater and closer to an ellipse it is than the ugly Moon orbit above. That's because it's still essentially a 2 body orbit not a 3 body. 2 body orbits are neat. 3 body orbits can get chaotic, stretched or bent, and the Moon is more than half way towards where it would become unstable and leave the Earth, so it's orbit is more unstable than most "stable" orbits in our solar-system, but it's still considered a stable orbit cause it's well inside the stable region of Earth's Hill Sphere.

As an FYI, Mercury's orbit doesn't neatly follow Newton's orbital laws either due to relativity and that was quite the puzzle to scientists for decades. The non Newtonian gravity accentuates Mercury's Spirograph orbit, pictured above but I used it, cause it gives a good example of a 2 body orbit over multiple orbits compared to our moon's jiggled orbit due to influence of a 3rd body (the sun). The point of all of this, is that elliptical orbits, (for the most part), are just as mathematically stable as theoretically/mathematically circular ones. Elliptical orbits aren't unstable nor are they an example of an orbit becoming unstable, they are stable, or at least, not unstable because they are elliptical. Some orbits are long term stable others are not, but the eccentricity isn't really a measuring stick for instability. The stable region of the hill sphere is a far better measuring stick. Both the orbits below, provided they are inside the stable region of the hill sphere, would be equally stable.

believe it or not, we can't expect a doctorate of celestial motion to arrive when we have questions. I'm just someone who has asked this question before, and as far as I can remember.

If you gave both the moon and the planet perfectly circular orbits then they would fall out of sync. Being in sync would require the gravities to sit at a perfect angle to each other exactly the same as when you balance a spoon and a fork in midair with a matchstick. What your question actually sounds like is, "if we round gravities to make it plausible that they could sit in perfectly round orbit, would it stay?"

Only then, and even then, only if we artificially created the system, because the universe knows the weight of everything down to the Higgs boson, if it is a single boson asymmetrical in shape or weight of the celestial bodies, then enough would be thrown off. space would have to be a complete vacuum. and something about temperature, radiation, impacts, other celestial bodies. ect ect.

Much like when you try to balance anything, you are playing with friction. This can be hard to understand, however, every single moon in existence will one day either crash into the planet, get flung away, or otherwise prove wrong anyone claiming a stable orbit.

Star A, has Planet A, which has Moon A.

Moon A is traveling away from Planet A at .00000000000001 mm a year. Due to universal frictions and radiation, it is calculated to lose all escape momentum this year. However, on average Moon A gets struck with debris that, more often than not, contributes to its escape velocity. Meaning that anytime the moon attains a stable orbit through decay, It loses it to impacts.

In this example Moon A doesn't get hit every year, some years it decays enough to start inching closer to the Planet, but it inevitably is struck again.

4
Could a habitable satellite of a gas giant have a stable subsatellite?
5
What is the orbit of Earth around the Sun?
4
Circular orbits
0
What is the shape of the Sun's orbit around the Earth taking into account elliptical orbits?
5
Does the Giant Impact Hypothesis explain how the Moon circularized its orbit?
9
Is a perfectly circular orbit possible?
7
Is the moon's orbit circularizing? Why does tidal heating circularize orbits?
2
Various moon orbits
41
Does the Milky Way orbit around anything?