I watched a video yesterday on how telescopes not only magnify images but also increase the amount of light entering into your eye, allowing you to see things not normally visible with naked eye. Would it be possible to create a "telescope" with no magnification, a wide field of view... say ~190 degrees left/right, ~120 degrees up/down (the average human field of view), and small enough to wear? Essentially creating glasses that allow for better star gazing?

A side question is do night vision goggles let you see more stars? or does the increase in ambient light from earthly objects negate any increase.

Stereo Vision? Optically, you'll need something like a couple big Fisheye lenses mounted on a helmet. Looking straight through such optics yields horrible distortion, so you'd have to feed the lens' output into CCD/CMOS sensors, and massage that into flattened images your eyes can handle, on a video screen. Perhaps Google Cardboard? Probably doable and light enough to wear. A straight optical approach to correcting the fisheyes would probably end up too heavy to lift.

The closest I've seen to what you mention in your question are wide-angle binoculars, the like of Vixen SG 2.1x42. There are other similar instruments available, often of Russian or Chinese (like this one) production. They have low magnifications and are examples of Galilean binoculars. 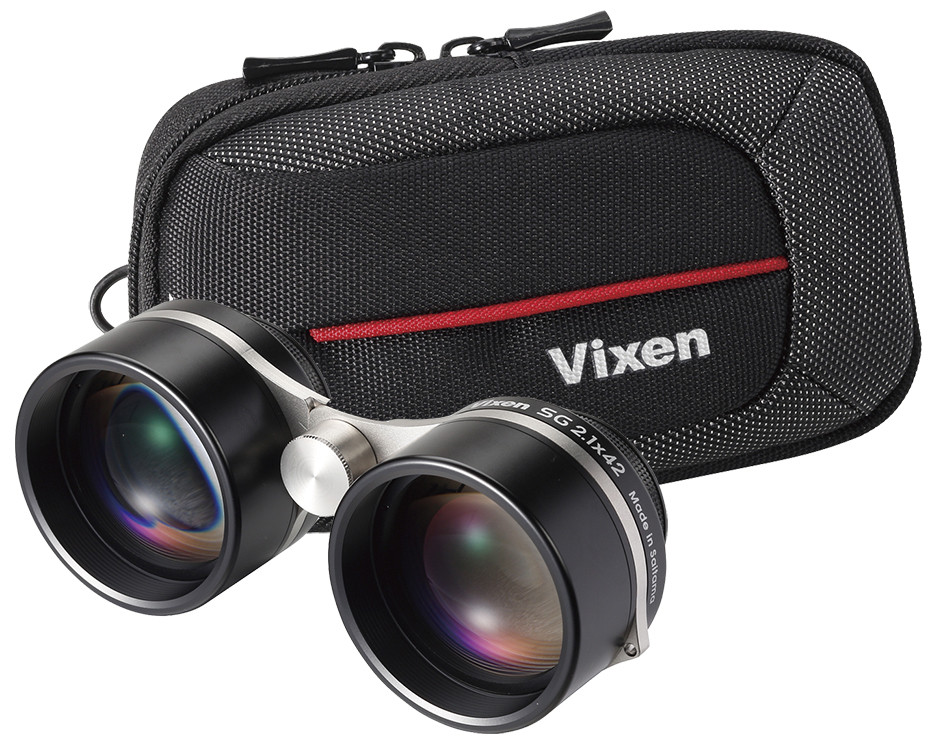 They don't have a fixed-size exit pupil and you can gain about 1.8 mag above what you can see with a naked eye (based on a review from a Polish astronomy forum).

With the field of view of about 25 degrees, this is an experience somewhat (to put it mildly) different from what you describe. However, it's enough to see quite a large piece of the sky at the same time and is probably the closest you can get to star-gazing goggles.

To make it easier to picture, 25 degrees is approximately the angular size of the Big Dipper, from one end of the bowl to the tip of the handle.

Due to their size and wide FOV, these binos are also known to be used in the same manner as goggles. Pictured below is a pair of Kasai WideBino 28 in a wearable, rubber casing. 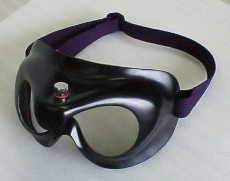 This thread on cloudynights provides a nice overview of this kind of binoculars.

Fisheye lenses. Sure, it's doable. But does it really lead to "better" stargazing? It's debatable. The human field of vision is already pretty wide as it is.

There are telescope eyepieces out there that operate on the principle of light amplification, and they do indeed raise the bar in terms of the faintest stars that can be seen in that telescope. They aren't cheap, though.

On Murdoch's Mysteries, the technophile detective at the end of the Victorian era made, in one episode, night vision goggles that used mirrors surrounding the eyes, essentially a pair of reflecting telescopes with no magnification.

It would not cover the same angle, though: just straight ahead. The naive design you might throw together would handle light arriving parallel to straight forward, so the actual field of view may or may not be useful. To purposfully make a field of view of a specific size and quality would require knowing something about it.

A common SLR photography lens has an enormous opening compared to your pupil, and high quality formerly pro lenses for pure mechanical film cameras can be found cheaply. Some designs even have a lens board for mounting, rather than a fixed camera enclosure.

In their original use, they project the image on a large (relative to your eye) screen, so produce an image dimmer than life. However, if instead of making a projection 44mm in diameter (say), you added an objective lens made for telescopes or a handy jewler's loupe (any magnifying glass works, but for more than 5× you need a fancy compound lens), you could project all the light into your eye.

Update: using on-hand materials it takes 3 pieces, not 2, and is unacceptably long (unless you want it looking like an old seafarers telescope). To concentrate the entire collected light, the next lens needs to be very large around to scoop in all of it. a hand-magnifier doesn't result in an image as large as the directly-observed target, and a powerful loupe is not large enough.

Not the answer you're looking for? Browse other questions tagged telescope star-gazing optics or ask your own question.

9
What qualifies as a good place for stargazing, i.e. with least light pollution?
5
Is there a 'South Star'?
1
app to locate star by coordinates
3
Which Planet/Star is it?
3
Can a telescope be built to focus on a point source star?
4
Constructing a periscope/telescope - trouble with lenses
1
Is there any official star gazing location list?
0
Hazy patch with huge comet tail