The "Lord of the Rings" has more than 60 moons, some of which are larger than Mercury. My question is, wouldn't the ring, which is mostly comprised of rocks, experience tidal effect whenever a moon is near?

Most of the 60 moons in the Saturn system are far away from the rings and very small, so their effect on the rings is negligible. But larger ones that are closer in (Enceladus) do have a rather significant effect on the rings, but as the gravitational pull of these moons is radially outward, it is hardly visible. On the other hand, small moons inside the rings that are a few kilometers in diameter cause significant changes in the ring system. 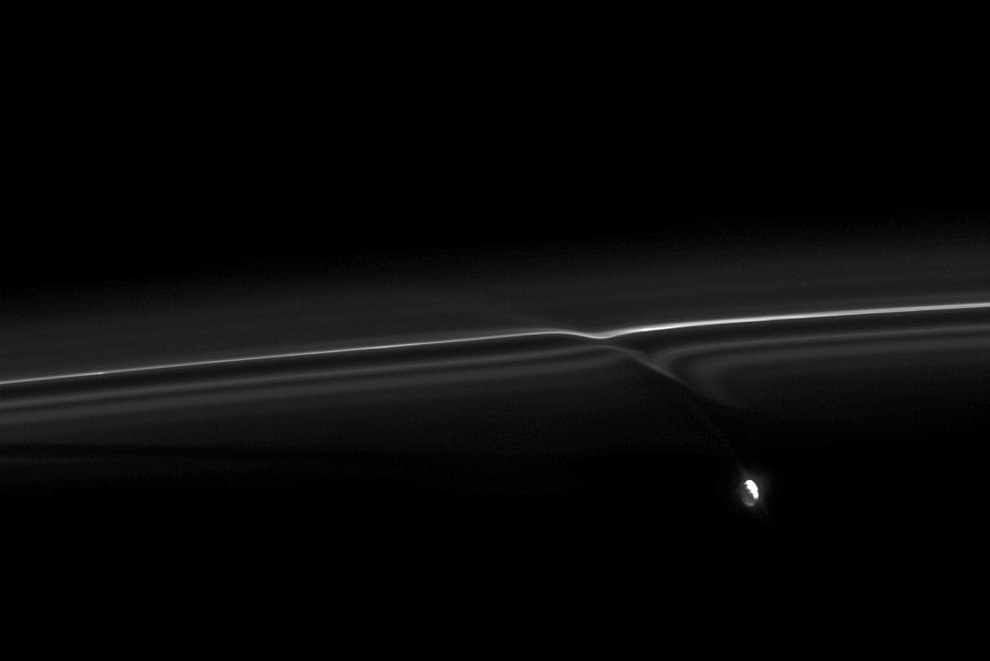 The orbits of those giant rocks are slightly inclined relative to the rings, which causes the rings to create a bulge in the direction of the small moon as seen in the picture. And these effects are fairly significant as the rings are mostly just a few hundred meters thick or less without a moon present, but with one, they are possibly hundreds of kilometers spread out.

Not the answer you're looking for? Browse other questions tagged gravity saturn tidal-forces natural-satellites planetary-ring or ask your own question.

11
"If earth had rings like Saturn": A few further thoughts on the consequences
9
Why does Saturn have both moons and rings?
9
How unusual is the solar system?
10
Why does the planet Saturn have numerous (62) moons compared to the rest of the planets in the Solar System?
2
Could binary gas giants have ring and moon systems?
4
How do a planet's moons and a planet's rings interact?
5
Why is Saturn invisible in this radar image of its rings?
4
What is the difference between a moon and a random chunk in the rings
6
If Jupiter and Saturn were considered stars, which of their moons would qualify as planets by 'clearing the neighbourhood'?