I am interested in current estimate of distribution of planets of various radii in various distances from their parent star. There is many sources, where one can find database of presently known exoplanets, for example exoplanets.org, www.openexoplanetcatalogue.com and others. However, the known exoplanets are, of course, subject to conditional probability of detection by various methods. One cannot take the database as representative distribution, because, for example, hot Jupiters or big planets in general would be greatly overestimated.

What are the best resources to obtain current unbiased estimates of exoplanet radii and distances?

As you've correctly mentioned observation biases play a huge role in current understanding of planetary populations. Let's have a look at a slightly outdated plot (age 2 months) that shows us the semimajor-axis vs mass distribution of currently known planets including KOI's (unconfirmed planets). 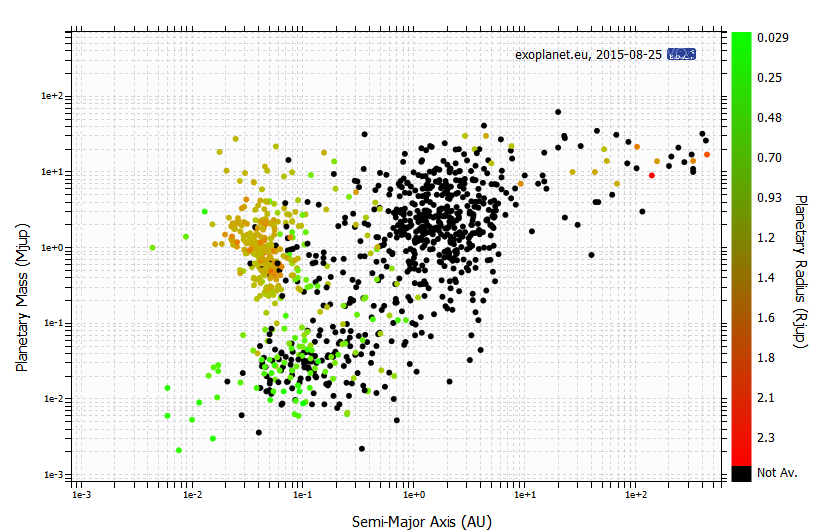 Now knowing how our methods and instrumentation work, we can try and debias this data.
Transit measurments pose the easiest ones to do this: as for transits the detection probability is a simple geometric function of planetary alignment, radius and stellar radius one can overplot the found planets with this probability. So this is usually of not very massive interest to the planetary community.
edit
The probability usually is given as $\sim r_{stellar}/2 a$, with $r_{stellar}$ being the stellar radius and $a$ the planet's semi-major axis. A simple derivation is here. Discussion how everything gets more complicated when combining with RV measurments here.
/edit

Any instrument one uses however, will have their own quirks and biases and starspots or eclipsing binaries can lead to false positives. Petigura+ 2013, fig. 1 try to asses those effects for Kepler transits and come up with the following detection probability map. 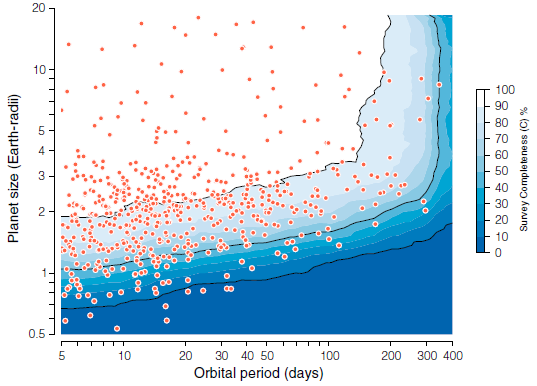 The corrected population then would be found by dividing $\rm\frac{found population}{completeness}$. Mathematical issues like dividing by zero are easily interpreted as issues stemming from the incomplete data. As where the detectability is zero, we can't know if there are 0 or 1 or 20 planets hidden in a bin. When projected on one axis or the other those corrected data-plots then result in corrected Radius- or Period occurence rates.
I won't show those for the transit method, as I want to encourage to check the original reference.

I show one of those plots for the radial velocity method however. From Mayor+ 2011, fig. 12 that analyse their HARPS-spectrograph data from the preceeding decade: 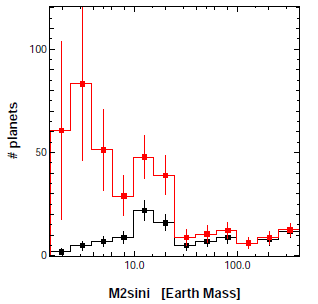 In black: Found planets, red: debiased radial-velocity population Note: A Jupiter-mass is roughly 320 Earth-masses, so in this plot the Hot Jupiters are on the far right. This now closes the thematic circle to my initial note about Hot Jupiters: While in black Jupiter-like planets seem very common, in the debiased version this is not the case anymore. Mayor et al. estimate the Hot Jupiters to make up only 0.5% of the total planetary population with this method.

Note also that although the debiased number of terrestrial planets increases significantly, their error bars explode in size. This stems simply from doing statistics with low numbers. Also for reasons of simplicity and clarity the error bars on the first two plots are not shown.

Concluding:
It is important to debias the data we have about exoplanets by method.
When doing this, we get rough ideas about how the true planetary populations look like.

Recent results and non-stop public announcments about "hundreds of newly found planets" can lead to a certain, totally understandable euphoria that we now know everything about planets.
This is however very far from true. The Number distribution in full mass-radius-semimajor axis space is still very, very thinly spread. So in the end we do low-number statistics when debiasing, which is scientifically simply unsatisfying.
Or said differently: There is still a lot of exciting work to be done!

Not the answer you're looking for? Browse other questions tagged exoplanet star-systems .

1
Where do gas giants end up?