If there was air between the Sun and Earth, how warm would we get?

Based on this question: How loud would the Sun be?

If instead of a vacuum we had air between the sun and earth (let's say of the same composition we have here on earth) how warm would our planet get?

This is a really hard question to answer as Carl Witthoft alludes to. The main problem is that there is no way you can finagle putting at atmosphere around the Sun and have it extend to the Earth. It would be wildly unstable and no matter what happens, the general result will be an explosion of energy that kills the Earth. And you can't really say you're going to wave some magic wand and prevent all of that because you're then fundamentally altering physics and you won't end up answering the question you wanted to ask to begin with.

Your only way of answering this question is to look at the current atmosphere of the Sun and try to extrapolate. Take a look at the figure below. This represents both the temperature (solid line) and density (dashed line) of the Sun vs height from the surface (what the "surface" of the Sun means is a whole other question). The temperature at the surface of the Sun is a measly $5800\:\mathrm{Kelvin}$. As you increase in height, this temperature (i.e., the temperature of the plasma atmosphere above the "surface" of the Sun) doesn't change much. This region of the atmosphere is known as the chromosphere. But then, at a particular height known as the transition region, there's a drastic increase in the temperature. It goes from a few thousand degrees to a couple million degrees. This area of the atmosphere is the Corona. This graph cuts off at $10,000\:km$ but the Sun's atmosphere extends far out beyond Pluto. 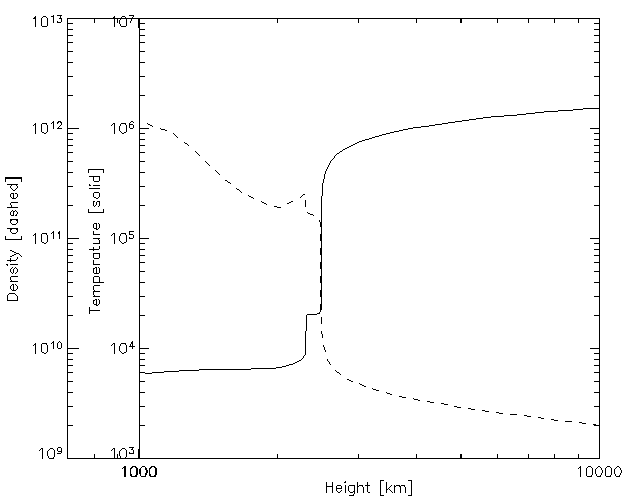 Hopefully you can fully appreciate the point I'm getting at which is that Earth actually is inside the atmosphere of the Sun and that atmosphere is really hot! The reason we of course aren't boiled to death is that the atmosphere is incredibly sparse. Only a handful of particles per cubic centimeter. So what you're really proposing is to increase the density of this atmosphere by an insane amount. You want to make it approximately $10^{20}$ times more dense! If we just extrapolate properties, that's going to turn the already hot atmosphere of the Sun (around the Earth) into something incredibly hot. And the huge density means we'll really feel the effects. The Earth will likely be vaporized in a flash, before the cataclysmic explosion which I alluded to above can even happen.

So, long answer short: About a billion degrees.

Sorta depends -- you can't have a uniform density atmosphere, so to reach something close to one standard atm. near Earth's orbit (which, BTW would wreak havoc with orbital stability in the first place due to drag), the density would have to be something horrible nearer to the Sun.

This would be an excellent xkcd what-if question if phrased more along the lines of "what density profile" ; my careful, detailed calculation (i.e. pulled out of an impolite orifice) suggests that such an atmosphere would rapidly collapse into the Sun proper due to gravitational attraction. I hesitate to speculate on just how hot the outer reaches would get due to optical absorption -- supposing that this atmosphere suddenly popped into place at an overall temperature in the 200-300 K range and immediately started both heating and collapsing.

Not the answer you're looking for? Browse other questions tagged the-sun earth heat or ask your own question.

20
What would the effects be on Earth if Jupiter was turned into a star?
124
How loud would the Sun be?
9
If the Sun got larger, but maintained its luminosity, would the Earth get hotter or colder?
85
How can there be 1,000 stellar ancestors before our Sun?
7
At what distance would it be safe for humans to stare at the sun?
3
How close would the sun have to get to Earth for there to be severe consequences?
5
How much magnetic attraction is there between the Sun and Earth?
20
Would an object shot from earth fall into the sun?
1
How much solar UV radiation would someone get who were on the surface of Titan?