What type of camera instruments are used to record optical images in space telescopes like HUBBLE & JWST.?

I am just curious about photos taken by space telescopes

What kind of type of camera systems are used in space telescopes like HUBBLE and JWST?

Are those cameras systems specially built for that purpose? Is there a significant difference between cameras we use and of those?

What type of lenses are used?

space-telescope photography
Share
Improve this question
edited May 30 '17 at 5:44

The HST and JWST are both mirror telescopes. There are many instruments on each, but the best known is the wide field and planetary camera (wfpc1), and its successors (wfpc2 and wfc3). These are all CCD cameras, and as such are based on the same basic technology that is found in many digital cameras, but there the similarity ends.

The camera is placed at the primary focus of the telescope. The telescope, therefore, acts as the main "lens". There are secondary optics, particularly in wfpc2 and 3 there are optics to correct the miscurvature of the main mirror. These optics are relay mirrors, not lenses.

The cameras have to deal with a lot of things that the cameras we use don't. There are high-energy cosmic rays that can damage CCDs, and servicing required a shuttle launch. The CCDs are sensitive in a wide range of frequencies, from infrared to ultraviolet.

The latest camera, installed in 2009, has two light paths as shown, separating the visible from the IR imaging. As noted by Sean Lake in a comment, CCDs are read out by moving charge across the detector, infrared arrays read out individual pixels. IR arrays have more problems with stuck pixels or variable sensitivity across the array. 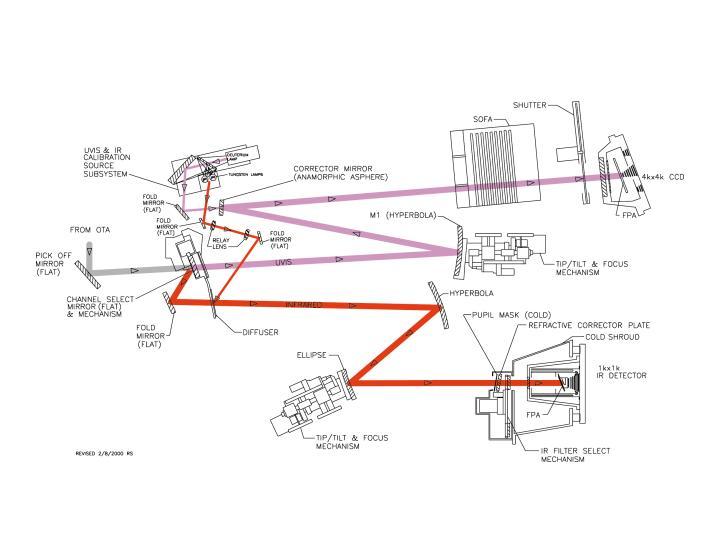 Not the answer you're looking for? Browse other questions tagged space-telescope photography or ask your own question.

17
Affordable night sky photography
10
What are the next planned space telescopes?
3
What is the highest granularity focal-plane array on a dish radio telescope? Or is this the ONLY ONE?
4
Does the focus of terrestial telecopes need adjustment for the distance of astronomical objects?
7
Where exactly is the modification that first corrected the spherical aberration in Hubble's primary mirror?
3
How are space telescopes stabilised to a perfect standstill?