I'm trying to imagine what a hypothetical observer on the surface of Alpha Centauri Bb would see in the daytime sky. I know it would vary depending on the orbit of b around B, as well as the position of B and A in relation to each other.

What would the "sun" in the sky look like at different times on Bb? I know that at times B and A would overlap and appear as a single sun, but what about when they don't?

exoplanet observational-astronomy
Share
Improve this question
asked May 1, 2014 at 16:14

I'm trying to imagine what a hypothetical observer on the surface of Alpha Centauri Bb would see in the daytime sky. I know it would vary depending on the orbit of b around B, as well as the position of B and A in relation to each other.

My calculations are based on data from these wiki pages:

Alpha Centauri B has 86% the diameter of the Sun.

Therefore, ACB would appear in the sky of ACBb as a huge, extremely bright and hot disk, about 21x bigger than the Sun as seen from Earth (25 x 0.86). The heat would destroy and melt many materials.

ACB looks a bit more orange than the Sun, but the color difference is small.

ACA and ACB orbit each other, being separated by as little as 11 AU, or as much as 35 AU. ACA is about 22% bigger in diameter than the Sun.

Therefore, ACA as seen from ACBb would appear as a very small "sun" (about 1/10 the size of the Sun as seen from Earth) when at the closest approach, or basically an extremely bright dot, with no apparent size, so shiny it would hurt the eye, when at the maximal distance.

ACA would provide essentially no heat, and very little light, when compared to ACB (or even when compared to what we get from the Sun here on Earth). But it would be very similar in color to the Sun.

At the closest approach, ACA would look very similar to the Sun as seen from Saturn. At the maximal distance, it would look like the Sun seen from Neptune.

ACB is a huge fireball of doom, 20x bigger than how we see the Sun, a bit of an orange hue, scorching hot, melting and igniting everything. ACA is a tiny disk, or even just a dot, yellow-white, very bright, providing essentially no heat and much less light than ACB.

ACA would grow bigger, then smaller again, following a cycle of 80 years.

ACA and ACB would get closer together in the sky, then drift further apart, on a cycle following ACBb's "year" - which is only 3.2 days in our terms. A very, very short "year".

It is not unlikely, although this is speculative, that ACBb is tidally locked to ACB, because they are so close together. If that's the case, ACB would only be visible from one side of ACBb, and would appear to remain "fixed" in the sky.

Here's an artist's impression. Keep in mind that ACB is a giant fireball, so this is more like a fisheye lens image (horizon to horizon in one snapshot). The size of ACA is overestimated. The Sun as seen from Earth would be the size of the letter B in that image. 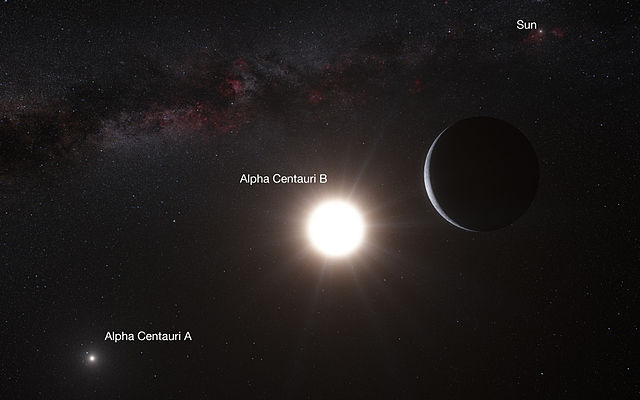 I know that at times B and A would overlap and appear as a single sun, but what about when they don't?

Well, do they? Do we know that for sure? For the overlap to happen, the orbit of Bb would have to be relatively coplanar to the mutual orbits of A and B. This seems likely, but I'm not sure if it has been established as a fact.

Not the answer you're looking for? Browse other questions tagged exoplanet observational-astronomy .

22
At what distance from Earth would our Sun be the same apparent magnitude as the next brightest star in the sky?
4
What day/night cycles, climate and seasons would experience Alpha Centauri Bb inhabitants?
19
How Would a Neutron Star Actually Appear?
2
Angles of sunrise and sunset viewed from a surface anyway oriented
7
How could a 20 inch space telescope "be able to make out Earth-size planets" orbiting Alpha Centauri?
37
If you lived on the far side of the Moon, how could you infer the existence of Earth?
1
How to calculate parallactic angle from a fixed alt-az position?
1
What would a red giant Sun look like from Proxima b?
1
How to determine the color term for a filter with a systematically bluer offset than the standard