Why are asteroids with zero orbital inclination rare? 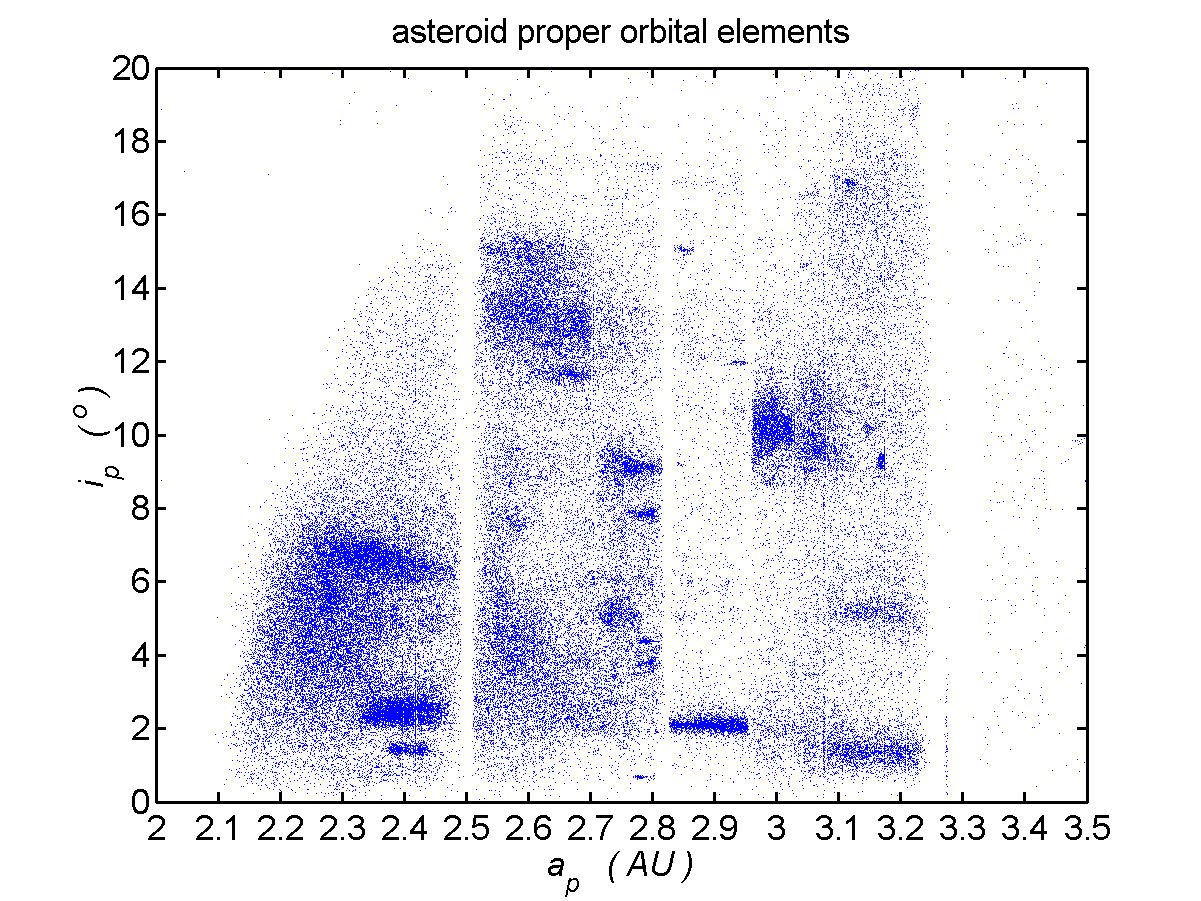 Some structure can be seen in this diagram; clumps are asteroidal families and vertical empty spaces are Kirkwood gaps due to mean-motion resonances with the planets (mosly Jupiter).

Recently I've noticed that there are fewer points towards the ecliptic in the first $\small{\frac 1 2}$ degree of orbital inclination. Is this due to some selection bias? or Is it because of some kind of resonance that eliminates asteroids with orbital inclinations too close to zero?

Short answer: The scarcity of asteroids with an inclination near zero is an expected result of normally distributed inclinations in 3-dimensions about the normal vector to the reference plane, rather than selection bias or an orbit "clearing" around zero degree inclination.

Long answer: Orbital inclination is typically defined as the angle between a reference plane and the orbital plane: 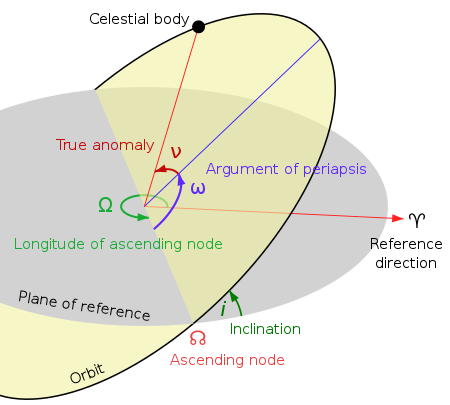 An equivalent definition is the angle between a reference plane normal and the axis of revolution of the orbiting body overlay-ed here: 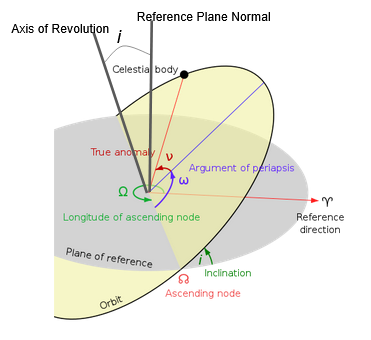 Notice that the axis of revolution can be mapped to a point on the Celestial Sphere. We can generate a Gaussian distribution of points on the unit sphere centered with mean at the reference normal using the von-Mises Fisher distribution. The specific algorithm for generating sampling points is given on Stack Overflow.

Here is a group of 20 revolution axis intercept points with their corresponding circular orbits:

We can generate and plot a thousand points on a unit sphere (that I rotate to show the structure): 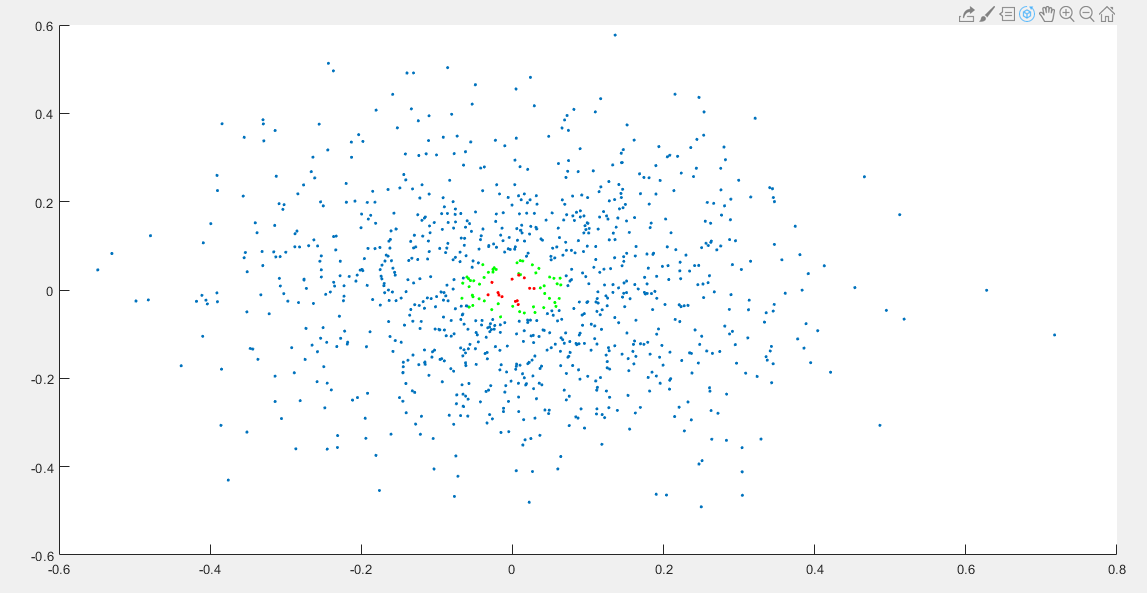 Below is a plot with the y-axis as inclination and x-axis as longitude compared with the OP's post. I chose a standard deviation that was much too large, but the 1000 point Monte Carlo demonstrates the same statistical effect asked about by the OP. 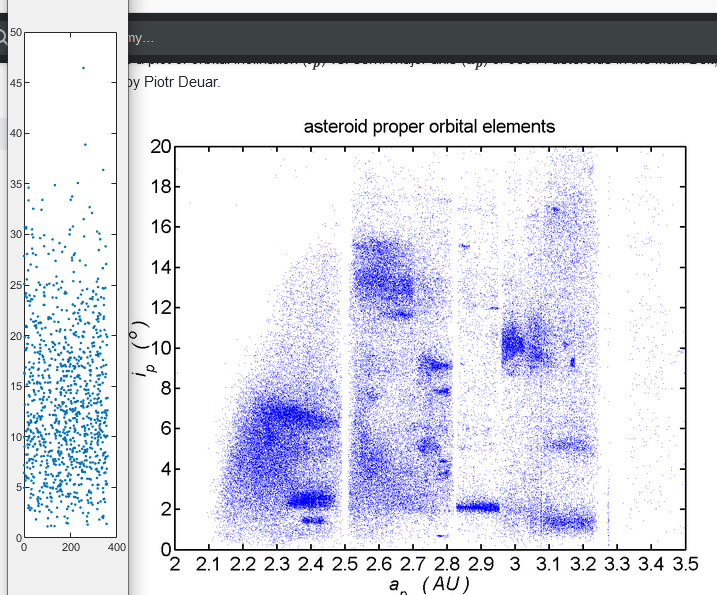 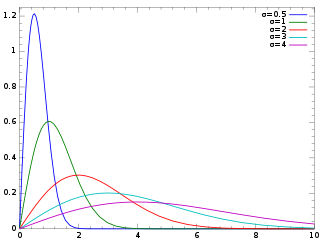 If lots of asteroid orbits were randomly oriented in space, then the number of orbits in any given interval inclination of inclination angles $di$, would be proportional to the area on a sphere covered by that range of inclination angles. That area $dA$ is given by $$ dA \propto \sin i\ di$$ One can intuitively see this result by imagining the inclination as a co-latitude on Earth (i.e. zero degrees at the north pole, 90 degrees at the equator) and asking yourself how much of the Earth's surface is at low or high co-latitude? The answer is very little near the north pole and much more at the equator. In the same way, randomly distributed asteroids would be very unlikely to have $0<i<0.5^\circ$ because there is very little area on a sphere in this range.

The fact that most asteroids have $i<16^\circ$ is telling you that they are very strongly concentrated towards orbits in the ecliptic plane, but the lack of objects with $i<0.5^\circ$ is I think just down to the factor discussed above. In fact it is easy to show that only 0.002% of a uniformly distributed set of orbital inclinations would have $0 < i < 0.5^\circ$. Even if we were instead (and perhaps more realistically) to confine all the asteroids to have $0< i <16^{\circ}$, then only 0.09% of these would have $0<i<0.5^\circ$.

To be sure, one should plot $1 - \cos i$ on the y-axis, since if asteroid orbits were uniformly distributed, then using this coordinate would give equal numbers for equal intervals on the y-axis. Thus genuine physical effects could easily be distinguished from mere mathematical consequences of the chosen coordinate system.

I'll propose that it can be understood trivially.

What would the inclination distribution of circles randomly distributed in three dimensions about some point? We could generate them by distributing the normals to their orbital planes uniformly on a unit sphere, and call the midplane or the plane defined by $\theta=\pi/2$ the ecliptic. Orbits with an inclination $i=0$ will have their normals pointing "up" ($\theta=0$) and those orbiting the "wrong way" with $i=\pi$ will likewise have ($\theta=\pi$).

Then we have $dn/d\theta = \sin(\theta)$ which is zero for orbits near the ecliptic and increases linearly at first.

Fall off at 10-15 degrees is because the solar system is not random but is both a creature and creation of angular momentum.

If you take that data and project it all back to the inclination axis, I predict that you'll see a roughly linear increase from zero. If there's a dead zone very close to zero, that's because the planets are scattered a few degrees in inclination and have a propensity to mix things up.

Not the answer you're looking for? Browse other questions tagged asteroids orbital-mechanics orbital-resonance or ask your own question.

20
Why did the distribution of asteroids discovered in 2010 have a radial modulation?
7
Generate an uniform distribution on the sky
10
How do you propagate asymmetric errors? (on the practical way to...)
6
Has any moon achieved "retrograde equatorial orbit"?
4
Probability of transit of an exoplanet in front of its star
4
Why are asteroids with circular orbits rare?

15
What are Trojan Asteroids and where are they located?
8
Stability of orbital resonance
9
How do tadpole, horseshoe co-orbital states arise and how are they stable?
4
Explanation of resonance stability and instability
1
Are there any known asteroids with average density similar to that of Earth's?
0
Are Trans-Neptunian Objects (TNOs) asteroids?
6
Cannot identify mistake in calculating orbital eccentricity vector; magnitude equals one instead of zero (with python code)
4
Why are asteroids with circular orbits rare?
6
When will Callisto be in orbital resonance with the rest of Jupiter's big moons?