How powerful a telescope would allow me to view the astronauts aboard ISS do a space-walk?

How powerful a telescope/binoculars would allow me to view the astronauts aboard the ISS do a space-walk? Aperture? Magnification?

This has been done before, so I don't have to go through all the heavy calculations using Rayleigh criterion accounting for atmospheric diffraction and visible light wavelength. Ralf Vandebergh, a Dutch astronomer, professional photographer and veteran satellite spotter has been busy trying to do exactly this since the 2007 and has indeed succeeded on several occasions by now using a 10 inch (25.4 cm) Newtonian reflecting telescope that has a resolving power (angular resolution on the CCD sensor) of roughly one pixel per meter at the distance to the International Space Station (ISS) that is currently in a 230 miles (370 km) orbit above the Earth: 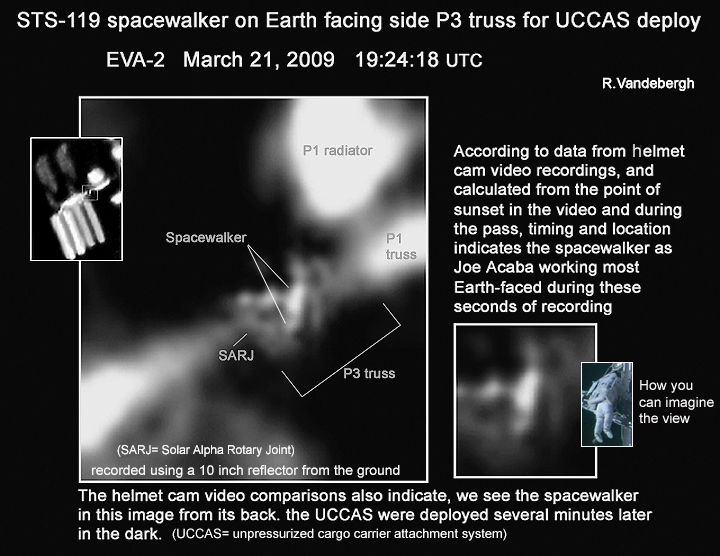 Ralf Vandebergh’s detail of an image he took on Mar. 21, 2009 showing astronauts working outside the ISS. Credit: R. Vandebergh

Vandebergh's personal page also hosts all kinds of other successful observations of the ISS through his telescope and recorded in both photographs as well as some short videos. Why short? Because targeting the ISS as it moves at the speed of 4.8 mi/s (7.7 km/s) is rather tricky, and the atmospheric conditions and times at which the ISS passes over some area on the surface of the Earth don't make it any easier either. But perseverance and hard work have paid well for this individual astronomer.

Raw video of the ISS as seen through the air turbulence. Note the good visibility of the Lira antenna at the Russian
Zvezda Module in the lower part of the image. Credit: R. Vandebergh

So again, skipping the math to calculate the required angular resolution of a telescope and apply that to some arbitrarily selected image sensor size and resolution, we can see that using a well collimated 10 inch Newtonian or a Dobsonian telescope on a clear night can, with some near perfect targeting, produce a direct proof of a spacewalker doing his or her job 230 miles (370 km) high during an EVA. More powerful telescopes would of course produce better resolution images, but the atmospheric effects limit their use and are of course much harder to target an object moving fast over the skies with.

Ralf Vandebergh is one of the best amateur astronomy photographers out there who does spacecraft photography. He is using a 10" (25.4cm) Newtonian telescope, as far as I know, so this is pretty much an off the shelf telescope.

He supposedly has imaged spacewalkers on previous ISS and STS missions. Though they are only a few pixels in size, and you cannot make out any details. Nevertheless, his images are definitely, absolutely stunning: 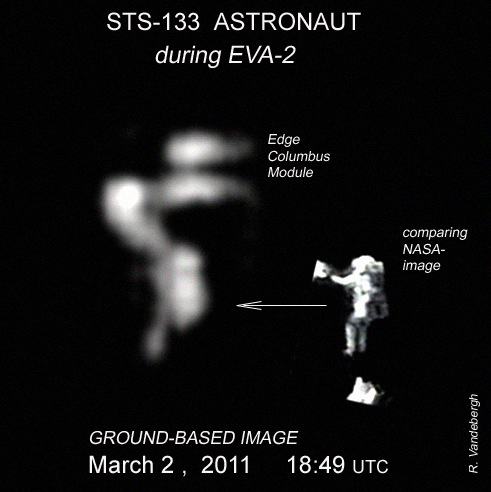 Note that its more or less symmetric, so hardware of a caliber sufficient to observe human activity on the ground from space, would, if mounted on the ground, be more or less of the same size and technology required to observe human sized activity in space. So you can cross check both theoretical and experimental results vs what parameters are known about military surveillance satellites. So you "know" it doesn't have to be 200 feet in diameter, and has to be way larger than binoculars, in fact about the size of a spy satellite seems to be adequate for military levels of reliability and illumination.

3
Enhanced Star-Gazing with Special Glasses
4
How to make a telescope for viewing planets, moon and DSOs using a convex lens of aperture 100 mm and focal length 200 mm and other lenses at home?
1
What solar features would I see at 10x magnification?
0
Buying a telescope for the first time. How important is the focal ratio and is a computerised telescope worth it?
1
Amateur observing
3
How can I improve the Field of View of my home-made telescope?
2
How does eyepiece exit pupil diameter affect image clarity and viewing experience?