How big can a crater get?

What is the biggest possible crater from an asteroid impact? Not asking for the biggest existing crater in the solar system. I should be able to find plenty of lists online. What I'm curious about is how big a crater can form before the impact results in both bodies reforming destroying near all evidence of the crater itself.

I don't mind erosion or normal geological processes destroying the craters. That is just a matter of time.

Eg when the Mars size object hit the Earth. Both were substantially altered and incorporated in each other. Earth experienced a near complete reformation (in the spherical sense). Also resulted in the moon's formation. Obviously that sort of impact doesn't leave an 'obvious' crater.

I assume the makeup (mineral, size, speed, angle of impact etc) of both bodies will change the answer, so maybe a just a short list of sizes for the various xommon combinations?

Eg what would be the biggest crater possible on Earth before the Earth experienced severe...Um, reshaping?

Theoretically, if you're talking crater to planet size, I (think) a crater that covers half or a bit more than half of the planet is possible if you have a dense planet (Say, Mercury) and a lighter, more icy object (say, Titan). Mercury would break Titan apart like a hammer hitting glass (er, maybe), but Titan, which is slightly larger than Mercury but weights only 41% as much, with a lower velocity impact, might not make the entire surface moulton and could leave an impact crater over 50% of the surface with debris scattered unevenly leaving something like an impact crater. That's, granted, pretty speculative, but I think that type of impact, a rocky world and an icy one of similar size might provide a collision that could create an impact crater a bit larger than 50% of the planet's surface. Such an impact would be interesting to observe, but . . . I probably won't see one in my life time, unless they get some very good telescopes out there and get lucky.

Theoretically if you count surface melt, it's arguably possible to have an impact that would melt 75% or more of the surface but leave 25% or less intact, but I don't consider surface melt the same thing as an impact crater, so I wouldn't count that, but that's optional.

As far as largest known craters, if we measure crater diameter against planet or moon radius (I'm going to ignore depth cause depth is easier on lower gravity bodies), but just diameter to radius.

Hershal on Mimas (the death star crater) (Props to Andy) 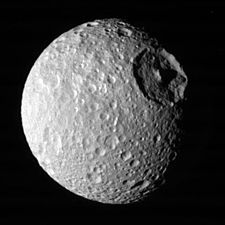 But there's an even bigger one.

The South Pole–Aitken basin on the moon. 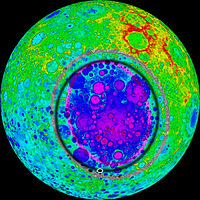 It went undetected until relatively recently because it's large enough that it no longer looks like a crater, but it is, and it affected the Moon's density where one half of the moon has a measurably thicker crust than the other half. (The crater half, I presume, the crust is thinner). This makes orbits around the Moon weird cause the moon is gravitationally quite lumpy. (Proximity to the Earth also makes orbits around the Moon weird, but that's another story.

This ancient crater has a diameter of about 2,500 km compared to the radius of the moon of 1,737 km a ratio of about 144%, over twice the relative diameter and 4 times the relative size relative to the crater on Mimas.

and Mars might have an even bigger one. See here. It's size isn't listed, but Mars (like the Moon) has a "split personality" where one side has a measurably thinner crust than the other side and one possible, perhaps likely cause of that is a giant impact. This "Crater" if we want to call it a crater covers about 1/2 the planet. This is different than the theorized Earth-Theia impact, which liquefied the surface and left no visible crater, but it may have liquefied half the surface and not left a very visible impact. One problem with measuring craters as they get this large is they look less like craters.

Not the answer you're looking for? Browse other questions tagged asteroids crater .

3
How to tell a crater is old or not?
5
Age of Occator Crater
1
How do we get the angular size of a crater without lens?
2
The dominance of Gravity vs Strength and its dependency on crater size
3
Age of Jezero crater on Mars
9
How did the Archimedes crater fill with lava?
6
What's the difference between a crater and a basin?
1
Elongated Moon crater statistics?
3
How did the mountain range form in Galle crater?