What is the composition of the Solar Wind?

Is the composition of the Solar Wind known? I'm especially interested in the heavy metals present. Most accounts deny the existence of anything other than electrons, protons, and some alpha particles; but it seems to me that if we can identify most of the known elements in the Sun's photosphere, then they are likely to exist in the Solar Wind at some concentration. If not, what is the detection limit (ppm? ppb? ppt?) we have so far established? Have any limits been established for atom clusters (dust?)? As a secondary question, I guess that (neutral) hydrogen and (negative hydride) H(-) do not exist in the solar wind due to its temperature being too high. Is this correct, and if so, is it true throughout the heliosphere or does the solar wind cool enough for the formation of bound species?

We have very good data on the heavy metals in the solar wind from the Charge, Element, Isotope Analysis System (CELIAS) on SOHO: 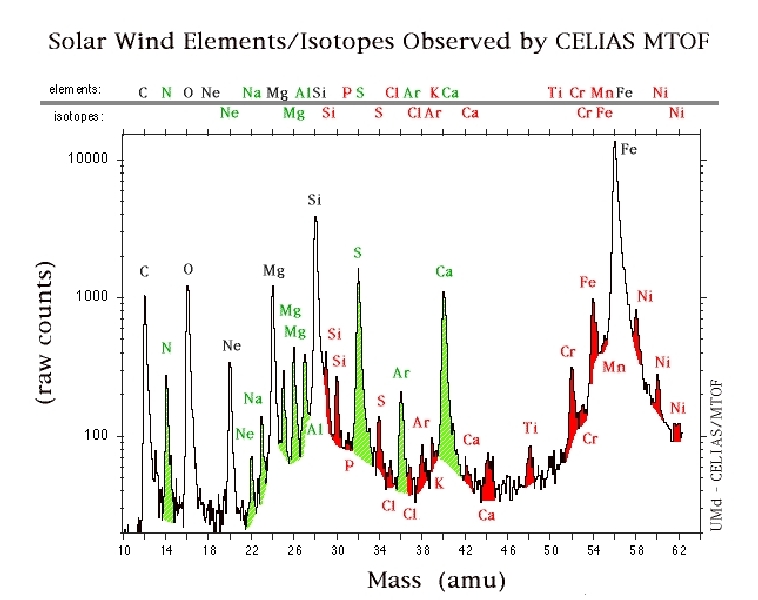 Some of these elements were previously known; others were observed for the first time. The new ones are phosphorus, chlorine, potassium, titanium, chromium, and nickel. They were detected in smaller amounts than, say, carbon, oxygen or calcium.

Now, the seeming overabundance of heavier elements, with the peak at iron, might seem surprising. One would think that the lighter metals - carbon, oxygen, etc. - might appear in higher quantities, given their substantially lower masses, which make it easier for them to escape the Sun's atmosphere. However, this is due to experimental bias. The instruments on SOHO were designed to search for these particular heavier elements, which of course led to the detection of several new isotopes. We now have a much better picture of what heavy metals can be found in the solar wind, but the chart above should not be taken as evidence of the relative quantities, as a whole.

Additionally, there actually is some neutral hydrogen, both in the solar wind and the solar atmosphere (see Olsene et al. (2004) and Collier et al. (2001)). It should be present in the corona, and can be detected and modeled by Lyman $\alpha$ scattering. It was also detected and studied by the Low Energy Neutral Atom (LENA) imager on IMAGE.

Not the answer you're looking for? Browse other questions tagged observational-astronomy solar-wind elemental-abundances or ask your own question.