How long have the TRAPPIST-1 planets been in a habitable zone?

The planets orbiting TRAPPIST-1 are in orbits around their star much closer than Earth orbits Sol. However, since TRAPPIST-1 is a cool brown dwarf, some of the planets are in an "inhabitable zone", where the temperature would not be too extreme for life as we know it.

What I wonder is, how long have those planets been in an inhabitable zone? The wikipedia page says that TRAPPIST-1 is older than 1 Gyr. But, how much of that time has it been a cool brown dwarf?

In other words, since the abiogenesis of life and the evolution of living organisms has dependency on time, how much time has life had a chance to develop in the star's habitable zone?

For this question, I'm not concerned about the chemistry or other characteristics of the planets themselves.

The luminosity of a brown dwarf decreases with time and it this measured luminosity (along with the spectral type) that allows an estimate of the mass and a lower limit to the age using stellar evolutionary models.

If I look at the Baraffe et al. (2015) low-mass evolutionary models and look at the locus of luminosity versus time for a $0.08\ M_{\odot}$ star like Trappist-1, you can see that the current luminosity implies an age of $\sim 500$ million years. But if you go back in time, the star was more luminous and for that reason, planets that are currently in the habitable zone (said to be planets e,f,g) were not so in the past.

The details of a habitable zone (HZ) calculation can be complex, but basically the radius of the habitable zone scales as the square root of the luminosity. If planets d and h are not currently in the HZ then we can use these as a conservative definition of the HZ boundary.

From this (and using the published orbital radii of the planets), I can see that if the luminosity is increased by a factor of 9, then none of the planets b-g are in the HZ, it is larger than all of their orbits. Trappist-1 had a luminosity that was 9 times larger when it was younger than 27 million years old. On the other hand, if I want to move the HZ just outside the orbit of planet e (and simultaneously include planet h inside the HZ), then this would occur when Trappist-1 was at an age of 206 million years. As a final thought, you can see from this particular model that Trappist-1 may fade by a further factor of two as it gets older. This decreases the HZ radius by a factor of 1.41 and would mean that g (and possibly f) would fall outside the HZ, whilst d (and possibly c) would be brought into the HZ.

It should be noted however that: different models give slightly different results, these loci are mass dependent and the mass is not known, it is inferred from the same models using a temperature estimate (which is also uncertain). So whilst my qualitative conclusions about the past location of the HZ are likely to be correct (though the detailed age numbers are model-dependent), the future behaviour of the HZ is more uncertain because Trappist-1 may be slightly more massive than assumed and already reached its minimum luminosity. 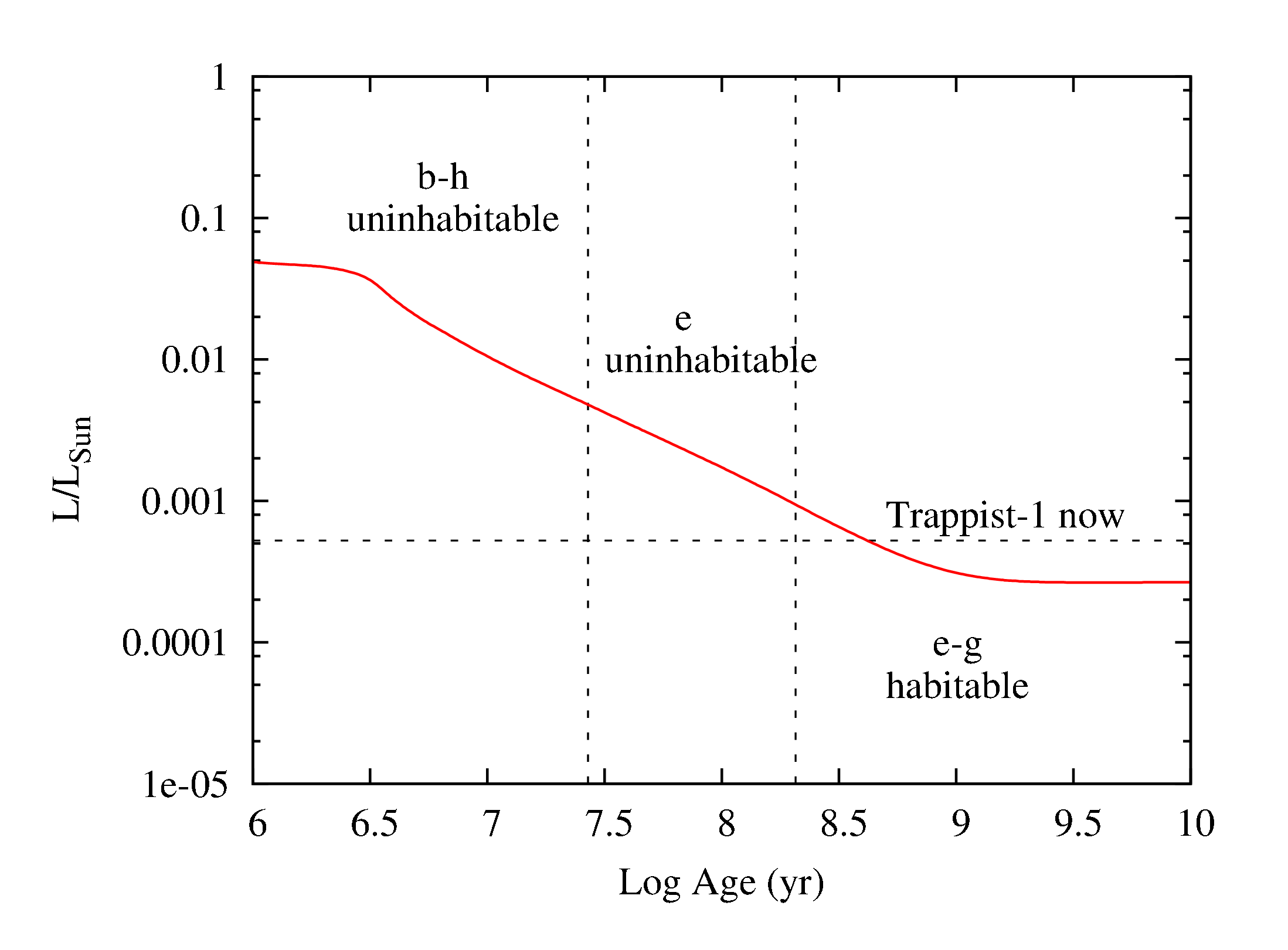 So the answer to your question is quite uncertain and depends critically on the age of Trappist-1 now and of course whether the planets were always at the orbital radii they are now$^{*}$. As you can see from the plot above (note the logarithmic scale on the x-axis), the luminosity evolution referred to above takes place early-on. If Trappist-1 could be as young as 500 million years, then life on planet e may only have been possible for 300 million years. However, if the star is slightly more massive and is 10 billion years old, then life has had 9.8 billion years to get going.

$^{*}$ The abstract of the discovery paper by Gillon et al. (2017) briefly discusses the possibility that the planets migrated inwards after formation, through a process of "disc-driven migration". If so, then this will not alter the discussion above. Disc around very low-mass stars may be longer-lived than those around higher mass stars, but have essentially dispersed after $\sim 10-20$ million years (Kennedy & Kenyon 2009; Dawson et al. 2013; Binks & Jeffries 2017), and the planetary configuration would have to be settled where it is now by the time the disc has gone.

6
What is the maximum number of planets in the habitable zone?
8
Sedna, VP113 and the likelihood of the PX/Tyche/Thelistos hypotheses
4
Average number and type of planets orbiting given star types
2
Low mass cut-off for the Dharma Planet Survey's detection of habitable planets around 40 Eridani A?
2
Could an Earth-like magnetic field protect life at exoplanet Proxima Centauri b?
18
Are there any to-scale diagrams of the TRAPPIST-1 system?
7
Could a Trappist-like planetary system exist around a sun like ours?
2
What would be the year length of a habitable planet of 40 Eridani A?
1
What is the most grazing exoplanet transit that has been reported with high confidence?
3
How often does the configuration of the Trappist-1 system repeat