How do we find the exact temperature of a star?

This is a very basic question, but I am a little confused. As far as I know, the temperature of a star is analyzed based on the color of the light it emits. So, if a star is moving away from us, then the light emitted by it will be redshifted(or if it is stationary with respect to us and the light undergoes gravitational redshift), then how do we know the exact temperature of that star or any other object because it is possible that we observe red light but actually the star might be emitting yellow light.

This question is very broad - there are very many techniques for estimating temperatures, so I will stick to a few principles and examples. When we talk about measuring the temperature of a star, the only stars we can actually resolve and measure are in the local universe; they do not have appreciable redshifts and so this is rarely of any concern. Stars do of course have line of sight velocities which give their spectrum a redshift (or blueshift). It is a reasonably simple procedure to correct for the line of sight velocity of a star, because the redshift (or blueshift) applies to all wavelengths equally and we can simply shift the wavelength axis to account for this. i.e. We put the star back into the rest-frame before analysing its spectrum.

Gerald has talked about the blackbody spectrum - indeed the wavelength of the peak of a blackbody spectrum is inversely dependent of temperature through Wien's law. This method could be used to estimate the temperatures of objects that have spectra which closely approximate blackbodies and for which flux-calibrated spectra are available that properly sample the peak. Both of these conditions are hard to satisfy in practice: stars are in general not blackbodies, though their effective temperatures - which is usually what is quoted, are defined as the temperature of a blackbody with the same radius and luminosity of the star.

The effective temperature of a star is most accurately measured by (i) estimating the total flux of light from the star; (ii) getting an accurate distance from a parallax; (iii) combining these to give the luminosity; (iv) measuring the radius of the star using interferometry; (v) this gives the effective temperature from Stefan's law: $$ L = 4\pi R^2 \sigma T_{eff}^4,$$ where $\sigma$ is the Stefan-Boltzmann constant. Unfortunately the limiting factor here is that it is difficult to measure the radii of all but the largest or nearest stars. So measurements exist for a few giants and a few dozen nearby main sequence stars; but these are the fundamental calibrators against which other techniques are compared and calibrated.

A second major secondary technique is a detailed analysis of the spectrum of a star. To understand how this works we need to realise that (i) atoms/ions have different energy levels; (ii) the way that these levels are populated depends on temperature (higher levels are occupied at higher temperatures); (iii) transitions between levels can result in the emission or absorption of light at a particular wavelength that depends on the energy difference between the levels.

To use these properties we construct a model of the atmosphere of a star. In general a star is hotter on the inside and cooler on the outside. The radiation coming out from the centre of the star is absorbed by the cooler, overlying layers, but this happens preferentially at the wavelengths corresponding to energy level differences in the atoms that are absorbing the radiation. This produces absorption lines in the spectrum. A spectrum analysis consists of measuring the strengths of these absorption lines for many different chemical elements and different wavelengths. The strength of an absorption line depends primarily on (i) the temperature of the star and (ii) the amount of a particular chemical element, but also on several other parameters (gravity, turbulence, atmospheric structure). By measuring lots of lines you isolate these dependencies and emerge with a solution for the temperature of the star - often with a precision as good as +/-50 Kelvin.

Where you don't have a good spectrum, the next best solution is to use the colour of the star to estimate its temperature. This works because hot stars are blue and cool stars are red. The colour-temperature relationship is calibrated using the measured colours of the fundamental calibrator stars. Typical accuracies of this method are +/- 100-200 K (poorer for cooler stars).

Schematic example: Assume, you measure the following two stellar spectra, and you're able to identify the typical H-alpha spectral emission line. This line should be at 565.3 nm: 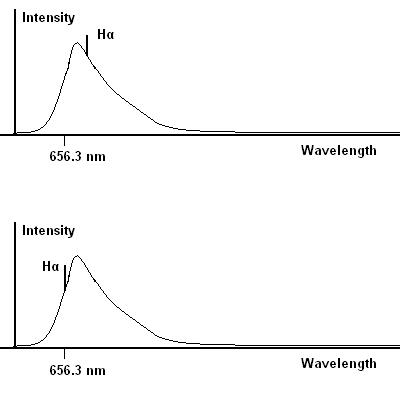 In the second spectrum, H-alpha is at the correct position: no redshift. In the first spectrum, it's redshifted (towards longer wavelength).

Both stars would look reddish, but the first one is the hotter one, and it's redshifted, either due to Doppler shift, due to gravity, or due to cosmic expansion.

Not the answer you're looking for? Browse other questions tagged star temperature redshift stellar-astrophysics or ask your own question.

1
how to measure temperature of the distant star

9
How does gravity affect the wavelength of light?
2
Can redshift be measured using fourier?
16
Are we still going to have rainbows if Sun is replaced by another star?
4
How does the number in stellar classification indicate properties within the range of that class?
1
Intuitive explanation for why the Doppler effect (and red-shift) happens?
7
What color is a red dwarf star?
1
HR diagram x-axis (color) and redshift?