It seems to me that that the allowed margin of error for parabolic mirrors drops with an increasing focal length. It's already like 25 nm for advanced Earth-based telescopes - which is just 50-250 atoms.

If we try building mirrors with an ever increasing focal length (e. g. as a part of a huge space-based interferometer), will we eventually reach a point where the precision required will be less than the size of the atom and thus no longer achievable? If yes, how far away are we from this limit now?

If we had unlimited resources, would it be possible to construct a space-based telescope for imagining extrasolar planets in great detail, or would this be not even theoretically possible due to the fixed atom size?

Ok, finally I can explain it. Not sure why it took so long.

Bottom line, for visible light atoms don't matter. Let's say the blue side of the visible spectrum of light has a wavelength of 400 nm (round number for simplicity). Let's assume the distance between two atoms in glass is 0.2 nm.

The thing is, light is a wave. Anything smaller than about 1/4 of a wavelength becomes essentially invisible to that wave. It's not a sharp threshold, but as things get smaller and smaller, the wave "sees" them less and less. It just goes around the object as if it's not even there.

I make telescope mirrors. I can still see the effects of surface errors down to about 1/20 ... 1/25 of a wave. Beyond that the image is not really distinguishable from a geometrically perfect mirror, either in real-life tests under the stars, or in the lab using the equipment. Maybe an interferometer could push that limit a bit further, but not a whole lot.

Let's say the absolute measurable limit is 1/50 wave, which is 8 nm, which is 40 atoms. That's plenty of atoms. Any defects smaller than that simply do not change the image created by the mirror - when talking about regular telescope mirrors.

The surface level difference from a single layer of atoms does not even register in visible light. It takes far more thickness than that to make a visible difference.

So your ultra-long focal length mirror would be almost flat, slowly adding extra atomic layers towards the edge. As long as it approximates the desired ideal surface (paraboloid, etc), then it will be fine.

I see one exception. If the focal ratio is indeed so big that there isn't enough curvature in the surface to require even a single extra layer of atoms at the edge. Then, indeed, the mirror would not work, because it's flat down to the atomic level. Keep in mind though, that would be a mirror with a humongous focal ratio - and indeed with a cosmic-scale focal length. There are many issues with such a system before you even begin thinking about surface errors. Probably not feasible with current technology.

But then what you would do is make a segmented mirror, increasing the apparent diameter and reducing the focal ratio. You could even have multiple flat segments (flat down to the atomic level) but far from each other to massively increase the total diameter, and slightly tilted according to the shape of the ideal surface. If you can afford a cosmic-scale focal length, then you can surely afford a cosmic scale diameter, and that's how you reduce the focal ratio. Maintaining that precise tilt angle between segments would be a tremendous feat of engineering.

No, the size of an atom does not limit the focal length of a telescope.

Halfway through this answer I further explain why the size of an atom isn't relevant and that instead we can use the size of an electron. Hydrogen is the smallest atom, it has one electron, one proton and no neutrons. An electron is 1/1836th the size of a proton; thus it is much smaller than an atom of $^1$H.

The number enclosed in parentheses is the measurement uncertainty on the last two digits. The value of $\mu$ is known to about 0.1 parts per billion.

For an explanation of what actually does limit the focal length see: What limits the usable focal length of telescopes currently?, to see why an atom does not limit the resolution of a telescope skip halfway through this answer.

Visual resolution of a telescope is directly proportional to the aperture of the telescope. The focal length, and hence the magnification that can be achieved, is then just following on the visual resolution.

The telescopes today are usually so well build that they are diffraction limited, which means optical resolution due to diffraction is the limiting factor. If you want to have "higher magnification" in a telescope, you always want to have a larger aperture. The longer focal length may help, but is not quite necessary.

And, as Jeremy said, the limiting resource in this is money. There are some engineering problems with building extremely large telescopes, but most of these can be solved, given enough money, time and resources.

It is diffraction that limits resolution of a telescope, not the size of an atom. That part of your question is essentially what differentiates your question from the other.

In astronomy, a diffraction-limited observation is one that is limited only by the optical power of the instrument used. However, most observations from Earth are seeing-limited due to atmospheric effects. Optical telescopes on the Earth work at a much lower resolution than the diffraction limit because of the distortion introduced by the passage of light through several kilometres of turbulent atmosphere. Some advanced observatories have recently started using adaptive optics technology, resulting in greater image resolution for faint targets, but it is still difficult to reach the diffraction limit using adaptive optics 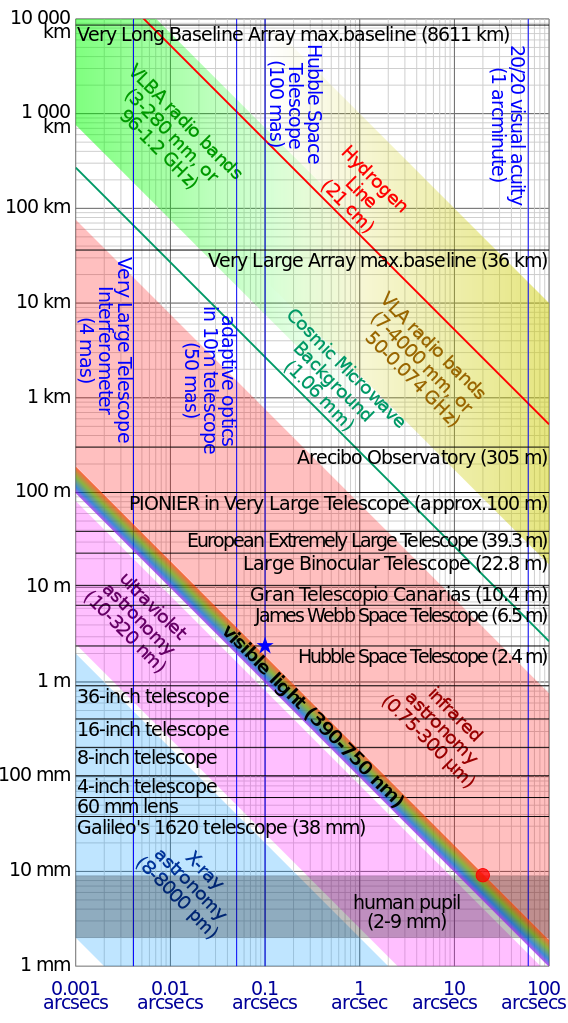 Log-log plot of aperture diameter vs angular resolution at the diffraction limit for various light wavelengths compared with various astronomical instruments. For example, the blue star shows that the Hubble Space Telescope is almost diffraction-limited in the visible spectrum at 0.1 arcsecs, whereas the red circle shows that the human eye should have a resolving power of 20 arcsecs in theory, though normally only 60 arcsecs.

Why is the size of an atom not a consideration?

The CALorimetric Electron Telescope (CALET) is a space telescope being mainly used to perform high precision observations of electrons and gamma rays. It tracks the trajectory of electrons, protons, nuclei, and gamma rays and measures their direction, charge and energy, which may help understand the nature of dark matter or nearby sources of high-energy particle acceleration. 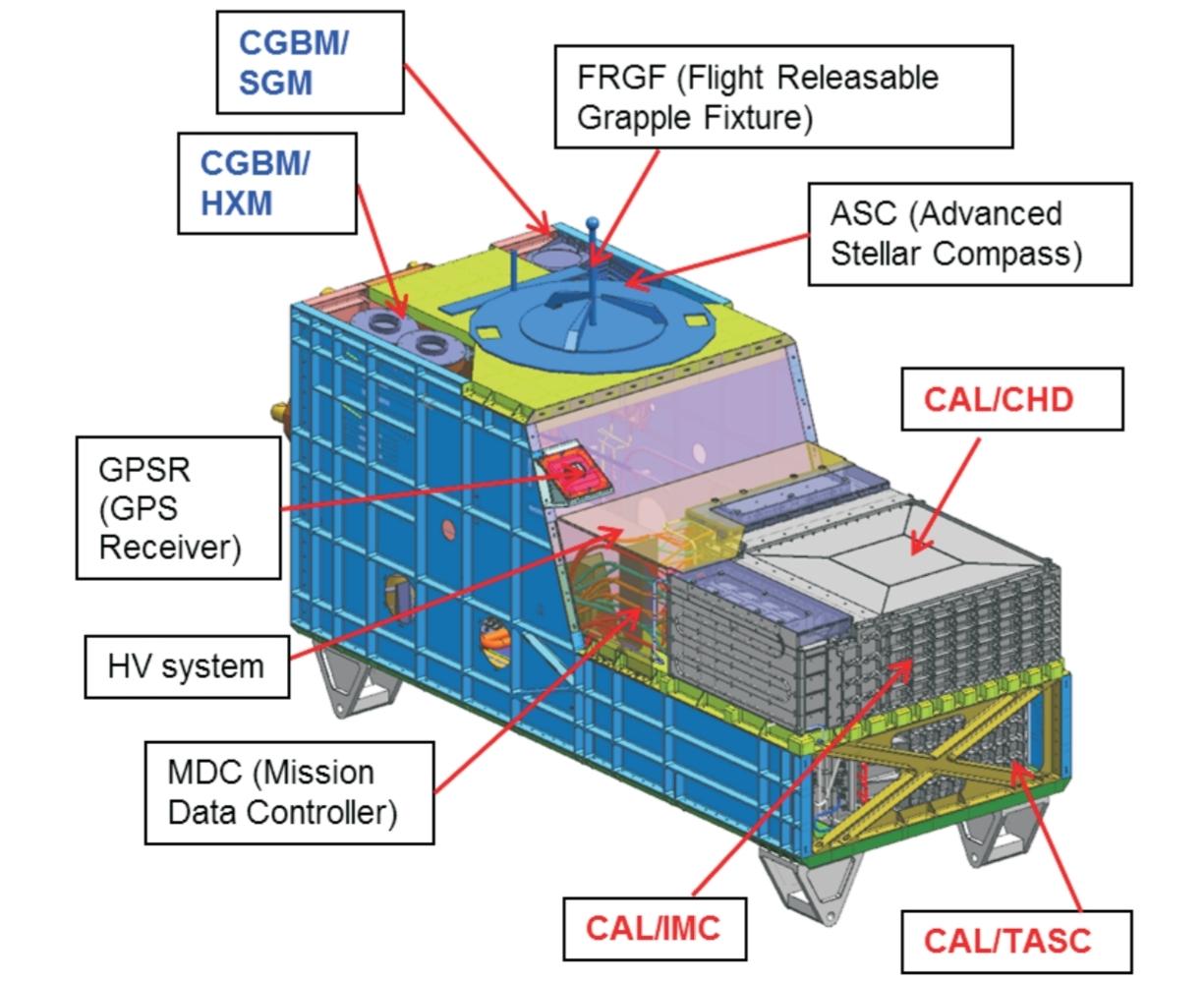 Figure 1. Drawing of the CALET payload. On the ISS the payload will be installed in such a way to have open sky on top, Earth on bottom. 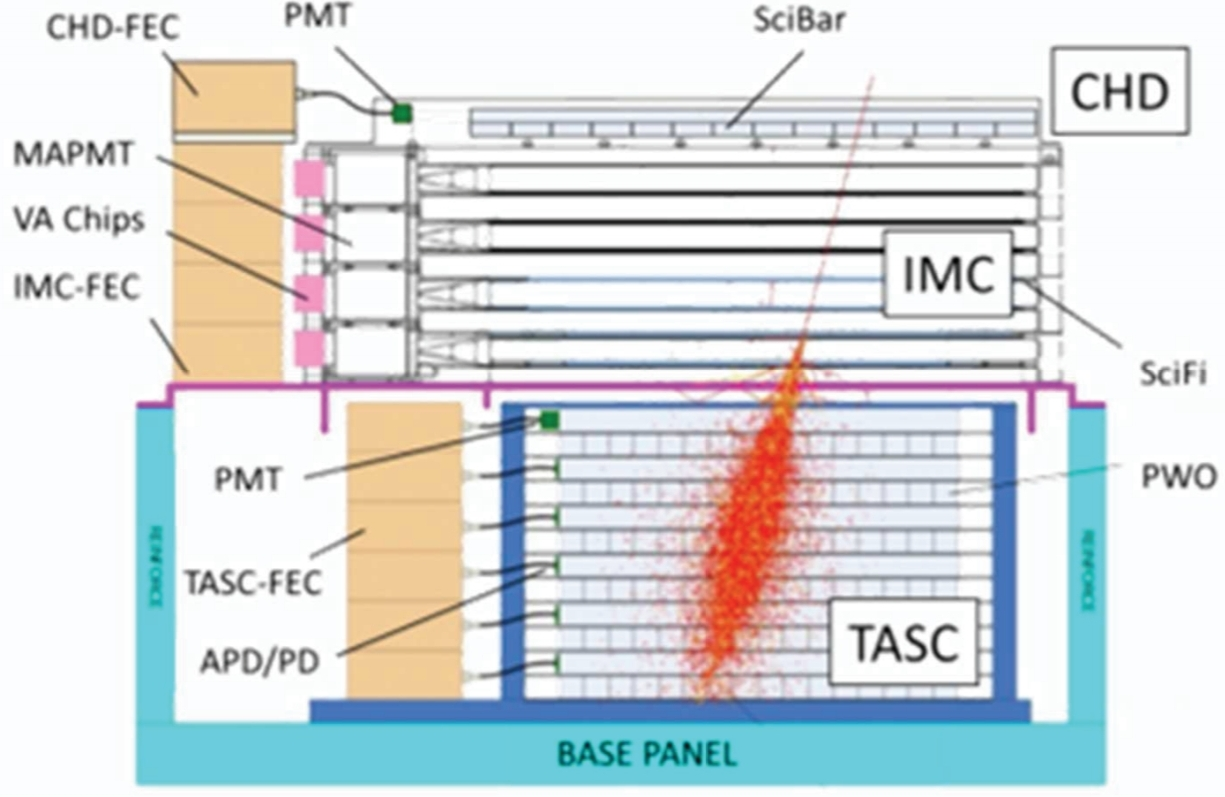 Figure 2. Drawing of the CALET-CAL instrument, with a typical shower of secondary particles generated by a 1 TeV electron incident from top.

The CALET calorimeter (see figure 2) is composed of a charge detector (CHD), a pre-shower imaging calorimeter (IMC) and a total absorption calorimeter (TASC). It is optimized for particle identification and energy measurement of several cosmic-ray species:

The CHD, positioned on top of the IMC structure, is composed of two layers of plastic scintillator with mutually orthogonal segmentation in 14 bars (SciBars), each of dimensions 3.2 × 1.0 × 44.8 cm$^3$ and read by a photomultiplier tube (PMT, Hamamatsu Photonics R7400U-06) and front-end circuit (FEC) with charge sensitive amplifier, for a total of 28 channels. The CHD determines the charge absolute value |Z| of the incoming charged particle, through the Z$^2$ dependence of the specific ionization loss. The very low uncertainty in the Z measurement (0.1 for light nuclei up to B, 0.3 in the Fe region) allows for resolving individual chemical elements with Z from 1 to 40.

The IMC is a finely segmented sampling calorimeter, with surface area of 45 × 45 cm$^2$ and total thickness of 3 radiation lengths X$_0$; internally, 8 double layers of scintillating fibres (SciFi, 1 mm$^2$ cross-section) are interleaved with a sequence of 7 tungsten plates: 5 of thickness 0.2 X$_0$ and 2 of thickness 1.0 X$_0$. The fibres of each double layer are mutually orthogonal and arranged in belts, each read by a 64-channel multi-anode PMT (MAPMT, Hamamatsu Photonics R7600-M64) and VA front-end ASIC circuit, for a total of 7168 channels. The IMC fine granularity allows for precise determination of the incoming particle trajectory, localization of the starting point of the secondary shower possibly generated, discrimination of the primary incident particle against possible backscattering from the shower developing in the pre-shower imaging calorimeter (IMC) and underlying total absorption calorimeter (TASC).".

Thus we can see a tiny particle, if it has enough energy, from as far as it can travel.

Not the answer you're looking for? Browse other questions tagged telescope mirror or ask your own question.

11
What limits the usable focal length of telescopes currently?