How to approximate the distance at which the thin disk peaks along a given LOS from Earth for a given galactic coordinate per 1 sq deg?

The density of stars drops off exponentially from the center of the galaxy and can be approximated as follows using a cylindrical coordinate system: 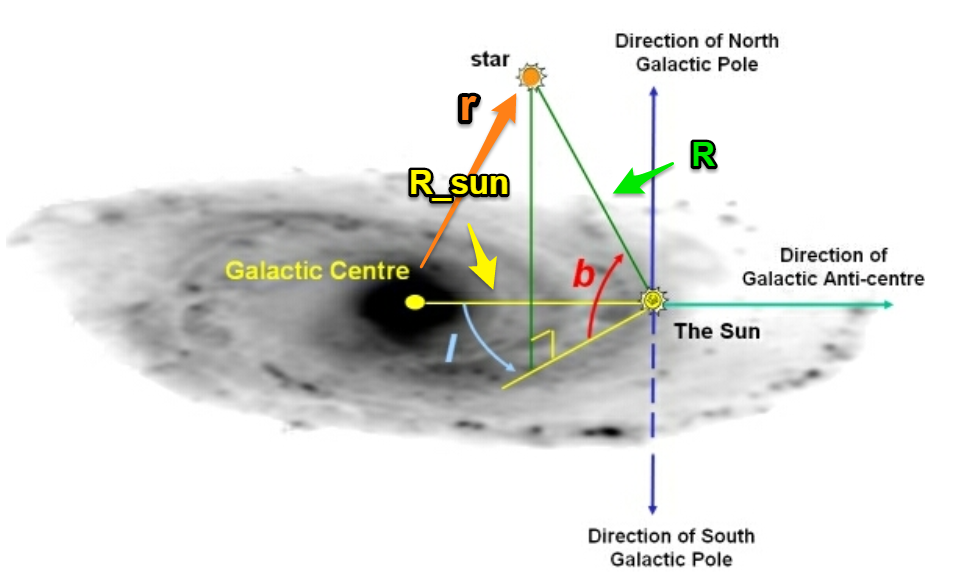 We want to know where the density of stars peak along at given LOS (from Earth) per 1 sq degree at a given l and b. There are 41253 sq degrees in the entire sky, so 1/41253 will be the fraction we want to multiply the density equation by. However, we must also consider how the volume element changes by distance along the given LOS, so we need to also multiply rho and 1/41253 by this change in volume. This volume element can be represented by $4 \pi r^2 dr$ (the surface area of the sphere and the small change in the distance along the LOS). We are almost done but need a way to transform between coordinate systems by relating galactic coordinates to distance r and R (as seen in the diagram above). Mathematically, they are related as follows (Eq. 3 in Where Does the Disk Stop and the Halo Begin? Kinematics in a Rotation Field Morrison, Flynn and Freeman 1990 Ast. J. 100 (4) 1191-1222):

So, for a given r (distance from star or LOS to sun), l and b, we can find R (the distance from the G.C. to the star or LOS). This is in cylindrical coordinates, so we need to use cos(b)R and sin(b)R to find R and z in the density equation above (note these are different r's). The volume element needs to be the LOS from Earth, which corresponds is the R in the diagram and equation for the paper (for the given l,b, and r). Putting this all together, I have the following code. Please let me know if this attempt seems reasonable, or if not, where I went wrong.

edit to add plot for given l and b above:

I can't see how to simplify it further. I think the right approach here is just to do a numeric solution using golden section search rather than do a lot of algebra that anyway ends with a root finding algorithm. Doing that also allows you to use any stellar density model.

Not the answer you're looking for? Browse other questions tagged star observational-astronomy galaxy milky-way disk or ask your own question.

28
How far is the Earth/Sun above/below the galactic plane, and is it heading toward/away from it?
5
Number density of stars on the Galactic plane
2
How is the maximum density in a circumstellar disk determined?
2
Milky Way stellar number density : is the stated equation in this paper incorrect?
8
What is the Galactic Latitude and Galactic Longitude? How is different from the latitude and longitude we use on Earth?
0
How can we calculate velocity of an object given the distance from an object in parsecs?
1
How is the distance of a star from Earth calculated in the HYG star database
1
how to find the approximate [stellar radius]? (distance from center to most distant star) of a circular flat disk galaxy based on its stellar mass?