Why can space telescopes see through a planetary nebula?

I recently read the book "An Introduction to Planetary Nebulae" by Jason J. Nishiyama. Although I'm not an astronomy student, I could at least understand the written texts and less the physical formulas. So, I got a nice basis knowledge now -- or that's what I like to think.

Now, I browsed through some pictures of planetary nebulae. Mostly from Hubble and such. I know that they synthesize their images by combining infrared + visible light + uv-light, but I still can't comprehend why these telescopes are able to see INSIDE a nebulae when the shape of mentioned nebulae are spherical? For example, the planetary nebula: NGC 3242 (Ghost of Jupiter); NGC 7293 (Helix Nebula); NGC 6543 (Cat's Eye). 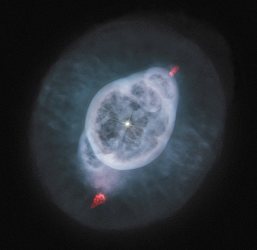 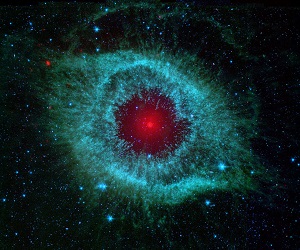 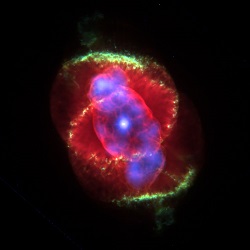 You can see the exposed white dwarf. And it looks like a thin shell envelopes that star, while the space between the star and the shell is scarce, like see-through. But wouldn't that image imply that the planetary nebula is disk-shaped? If the nebulae is spherical, then shouldn't there be "more nebulae" between the star and the shell? Or shouldn't the inner space be tinted in the color of the nebulae, because we look at a white dwarf that's behind a shell? I've drawn my problem with Paint too, sry for my artistic skills: Pattern A is what I thought it should be; Pattern B is what I think it looks like. 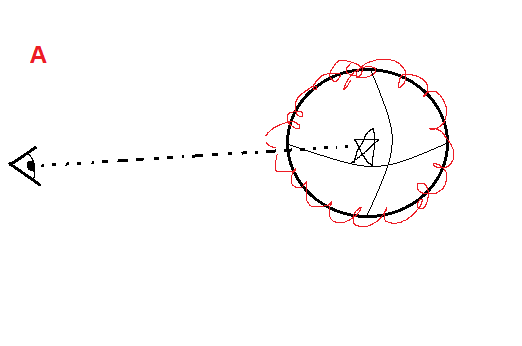 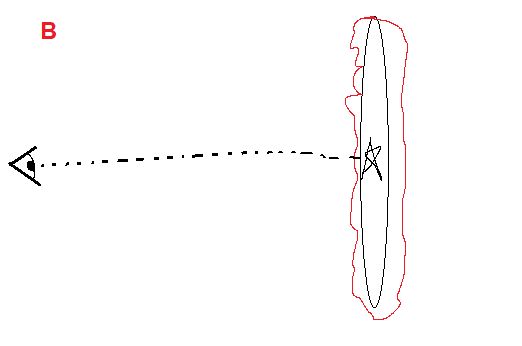 observational-astronomy nebula
Share
Improve this question
edited May 12 '21 at 20:00

Let's say we have a spherical shell of some material emitting light, much bigger than the star it surrounds. If we look right down the center of the shell, our line of sight takes us through only a small amount of gas - not enough for there to be significant emission. On the other hand, if we look at the nebula near the outer edge, our line of sight takes us through substantially more material: 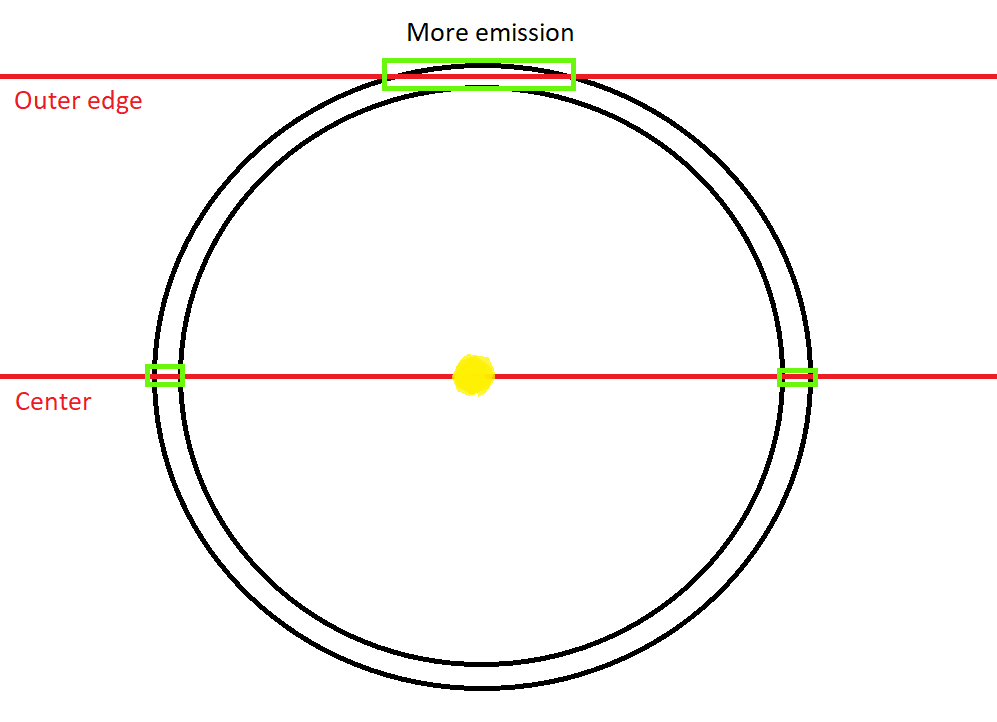 Inspired in part by an image in this piece by Phil Plait.

This simple spherical model holds for some cases, but certainly not all, particularly because many nebulae aren't spherical (Wikipedia makes the claim that only ~20% are truly spherical, which I haven't been able to verify.) For example, we know that the Ring Nebula isn't actually a sphere because the central surface brightness is much lower than the projection effect I described above would predict. Something else clearly must be going on. In this case, the discrepancy is solved by the fact that the Ring Nebula is a bipolar nebula, with its axis along our line of sight, with a dense ring of gas around its equator. Therefore, there's more material near its edges than its center from our perspective, and so we see more emission.

Thin gas in a nebula only absorbs some portion of star light corresponding to a small subset of the overall visible spectrum, according to the corresponding molecular composition of the nebula. For even these limited spectral ranges, the star is still often visible in a nebula since the gas can be too thin to absorb all the energy emitted by the star.

The opacity of gas is frequency dependent according to its composition and temperature. For example, Monteiro et al. [2013] in Spatially resolved physical and chemical properties of the planetary nebula NGC 3242 show a typical spectrum figure from a particular pixel of the NGC 3242 (Ghost of Jupiter) nebula (away from the central star): 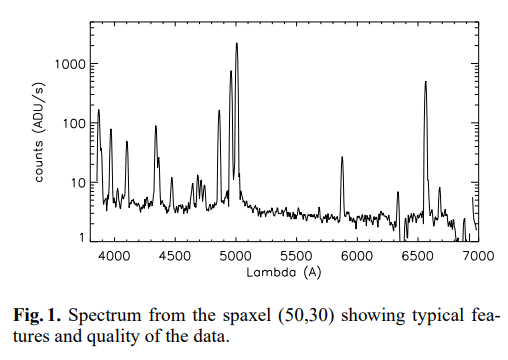 The peaks and troughs in the above figure correspond to particular molecules in the gas nebula emitting and absorbing energy in the visible wavelength ranges of light (from 4000-7000 angstroms). The biggest peaks around 5000A wavelength are probably doubly ionized oxygen. See: Why are O III lines so prominent in the spectra of emission nebulae when the amount of oxygen relative to hydrogen is a million times smaller? for further detail.

Stars, on the other hand, tend to have a more broad emission spectrum consistent with a thermal blackbody. Here is an example from the Sloan Digital Sky Survey:

So, along the light frequencies for which the nebular gas is mostly transparent, we can certainly expect to see the central star. 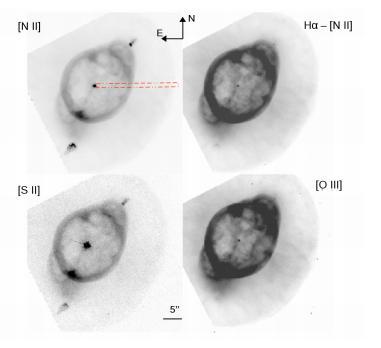 The darker pixels in the image correspond to higher energy emissions. The star varies in energy intensity compared to the gas by frequency, but is still visible above in all four wavelengths. This is not the case for NGC 7662 (Snowball Nebula), which is fully obscured for some narrow chosen spectrum of Oxygen and Nitrogen emissions. 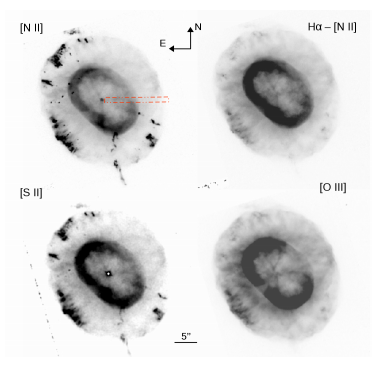 However, again in the full optical spectrum, the central star for NGC 7662 is clearly visible: 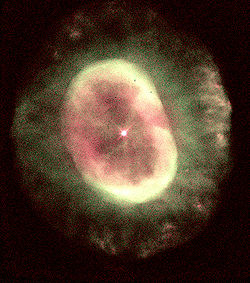 The answer is quite simple: you can also see the other side of the room (or maybe through the fume or haze above your oven) when you create a tasty meal) - even when the space between you and the wall is not empty: it is filled with air. But air is thin enough that you can see through even when it might be thick enough to both, absorbe a bit light and emmit a bit light. A maybe more astronomical analogy: from space you see that Earth has a thin layer through which you can also look :)

In space the densities we talk about are MUCH less then here on Earth in air. Even a planetary nebula is by terrestrial standards still an extremely good vacuum (100.. 100000 particles / cubic centimetre compared to 10 billion billion particles per cubic centimetre of air).

Not the answer you're looking for? Browse other questions tagged observational-astronomy nebula or ask your own question.

6
Why are O III lines so prominent in the spectra of emission nebulae when the amount of oxygen relative to hydrogen is a million times smaller?