Why haven't we had an "asteroid attack" until now?

We know that there is a big and dense ring of asteroids between the orbits of Jupiter and Mars and also "Trojans" and "Greeks" in Jupiter's orbit too. We also know that 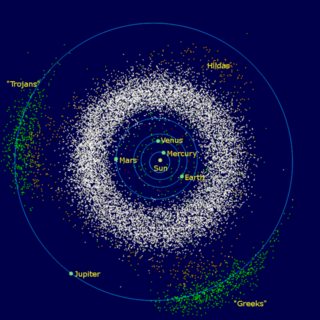 Also, Earth got hit by around 6100 meteors large enough to reach the ground, that's around 17 meteors a day, which is a lot!

If any of them hit any asteroid so wouldn't it be a disaster! As no atmosphere is there to stop them and meteorites have high speed, high enough to break Jupiter's gravity, so there should be a chain reaction as one asteroid hitting other two and the two becomes four, growing exponentially. So a sudden impulse can cause this, then we should get a fleet of big rocks as high as Mt. Everest coming at high speed towards us? Is it so, or anything am I missing?

That asteroid diagram is a bit misleading. It's showing the distribution of the asteroids, but it greatly exaggerates the sizes of all the bodies relative to the sizes of the orbits. Even the dot representing the Sun is too big. If the body sizes were to scale in that diagram, all of the planets & asteroids would be smaller than a pixel, so they'd be invisible.

There are around 10,000 asteroids with a diameter of 10 km or greater, but they aren't close to each other, so your "chain reaction" scenario with a comet launching a fleet of Mount Everest sized asteroids heading towards the Earth isn't really possible. Even with much smaller asteroids it's still extremely unlikely.

From Wikipedia, here's a diagram show the numbers of asteroids of different sizes.

Also from that article,

The orbital distribution of the asteroids reaches a maximum at an eccentricity of around 0.07 and an inclination below 4°. Thus although a typical asteroid has a relatively circular orbit and lies near the plane of the ecliptic, some asteroid orbits can be highly eccentric or travel well outside the ecliptic plane.

Most of the asteroids of any significant size are in well-behaved orbits of low eccentricity. Major collisions aren't impossible, but they have low probability. And that includes collisions with bodies passing through the asteroid belt, like comets or spacecraft.

According to veteran asteroid hunter Tom Gehrels of the University of Arizona, in this Scientific American article from 1997,

In some ways, the asteroid belt is actually emptier than we might like. In the early 1990s, the National Aeronautics and Space Administration wanted the Galileo spacecraft to encounter an asteroid while it was passing through the asteroid belt on its way to Jupiter. But it took some effort to find an object that was located even roughly along Galileo's path. Special targeting was required to reach this object, but the result was the first close-up view of an asteroid, the one called Gaspra.

The number of objects in the asteroid belt increases steeply with decreasing size, but even at micrometer sizes the Pioneer spacecraft were hit only a few times during their passage.

It takes a lot of energy to perturb the orbit of a large asteroid. Yes, a large comet could supply that energy, and send dangerous material towards us. We do need to keep watch on the asteroids, but we don't expect a fleet of them to head our way anytime soon. Most of the exciting planetary bombardments happened billions of years ago, when the young Solar System still had plenty of bodies with "wild" eccentric orbits. The last big episode, known as the Late Heavy Bombardment, happened around 4 billion years ago... or perhaps it didn't actually happen. ;)

The Late Heavy Bombardment (LHB), or lunar cataclysm, is a hypothesized event thought to have occurred approximately 4.1 to 3.8 billion years (Ga) ago, at a time corresponding to the Neohadean and Eoarchean eras on Earth. According to the hypothesis, during this interval, a disproportionately large number of asteroids collided with the early terrestrial planets in the inner Solar System, including Mercury, Venus, Earth and Mars. Since 2018, the existence of the Late Heavy Bombardment has been questioned.

Not the answer you're looking for? Browse other questions tagged asteroids comets asteroid-belt or ask your own question.

1
Is there any chance Comet Bernardinelli-Bernstein could collide with Earth?