Does gravitational lensing cause a black-hole to be the main 'source' of light in a given area? 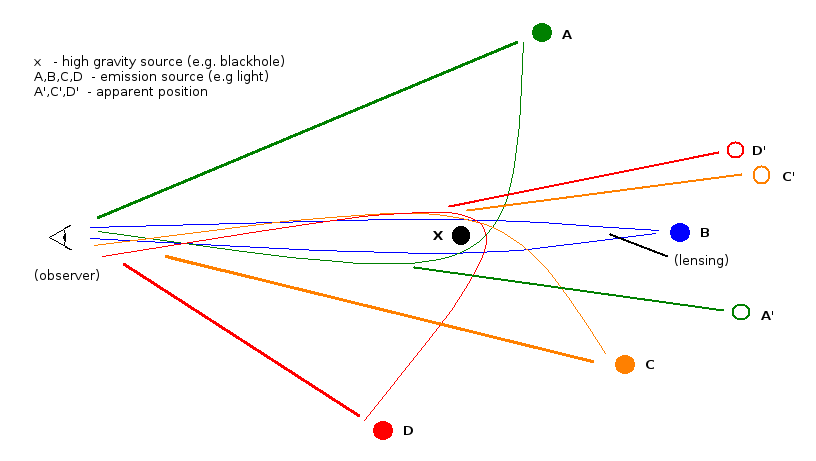 Light gets bent around high-gravity sources, such as a black-hole. A source of light, say A, is directly observed in its 'true' position and some of its light is bent around the black-hole, X, which gives a second observation of A, called A'.

Does gravitational lensing cause the amount of emissions (detected as coming from the (point/position/direction) of X) to far exceed anything else in that vicinity?

Does this then make the 'black-hole' by far the brightest, noisiest thing to be observed? (kind of like waving & shouting in a quiet room)

[edit - based on astromax's answer]
I follow what is meant regarding super massive black-holes.
Consider the following scenario: A suitable massive sun on dying contracts into a (small) black-hole. This black-hole will now cause a lensing-effect, but since it is small the amount of emissions so 'lensed' around it is very small and maybe too small to detect? or, it is detected but erroneously ascribed to be a type of sun or other type of emission source?

So the question is, Can black holes be really be extraordinarily bright due to lensing of background objects?

Let's first also specify that these black holes must certainly be super massive. If not, we're talking about stellar mass black holes (or intermediate mass black holes), and the lensing signal would be much weaker. More mass = more lensing generally speaking (there are some exceptions, e.g. - microlensing, where the lensing is done by stars in our own Milky Way galaxy and the signal is enhanced because the source and lens are aligned nearly perfectly).

If we modeled the center of the lens galaxy as a point-lens, and the galactic halo as a singular isothermal sphere, the relevant question I would ask is what are their Einstein radii (which is a measure of how effective or efficient they are at lensing) individually, and what are they in combination? Essentially, how much does the existence of a central super massive black hole matter to the system as a whole. Strong lensing features (arcs, rings, or multiple images) generally occur at around the Einstein radius of the object.

Quite honestly I don't see the central super massive black hole mattering all that much when it comes to lensing. Many of these mass profile models for the lens galaxy halo are singular, or rise very rapidly to a central core. Furthermore, I've never really heard of a situation where a lone super massive black hole (not associated with a galaxy - call it a 'rogue' smbh if you will) has been found floating around in space to do this sort of lensing. They generally hide at the centers of galaxies, or show themselves only if they're actively accreting material. Correct me if one has been found (maybe it would come from a merging of two smbh's where one is kicked out of the system).

Not the answer you're looking for? Browse other questions tagged black-hole gravitational-lensing or ask your own question.