Are there any double stars that I can actually see orbit each other?

If I had a nice amateur telescope†, are there any multiple star systems that I could observe over a few years or a few decades and actually see the movement of one or both of them over time?

My short human lifespan and limited telescope put heavy constraints on the orbital distance, brightness, and distance from the Sun, so I am guessing that if there are any at all, the number is probably small.

†arbitrarily defined as say 8-inch (20 cm) aperture, with a good set of eyepieces, and a sketch pad.

Probably Porrima, $\gamma$ Vir, is the best candidate for most observers in the Northern Hemisphere to see changes in a binary orbit, particularly using a small telescope. It is a pair of stars with similar size and visual magnitude, of about 3.6. Their orbital period is about 169 years, but the orbit is eccentric, e = 0.88. They are also relatively close at about 40 ly. Periapsis was in 2005, so the stars are now moving away from each other, but their rate of separation is decreasing. Separation at periapsis was about 0.4 arcsec, so would not have been resolved using a small telescope in 2005. By 2015 their separation was ~2.5 arcsec, and will increase to ~3 arcsec by 2020. I estimated a position angle change between 2015-2020 of ~7 degrees. These changes should be detectable with a 100-200 mm (4-8 inch) telescope.

Since most short period binaries are close together, with nearly circular orbits, and often more distant, they are very difficult or impossible to resolve with a small telescope.

As mentioned in @MichaelWalsby's answer, it is also possible to observe the orbit of the white dwarf binary companion to Sirius, the brightest star visible in the night sky. Sirius is only 8.6 ly away, and their orbit has a semi-major axis of about 7.5 arcsec, an eccectricity of e = 0.59, and a period of about 50 years. If this pair were similar in brightness, they would be an easy answer to this question. Unfortunately, Sirius B, or the Pup (as the companion is known to amateur astronomers), is ~10 magnitudes dimmer than Sirius, and usually lost in its glare. It takes a night with excellent seeing, i.e. a stable, non-turbulent atmosphere, especially since Sirius never gets much above 30 degrees elevation at the mid-northern latitude where I live. I have only seen the Pup 4 or 5 times (one view was probable but not certain) over almost 6 decades of observing, and I have never seen it in a telescope with aperture under 300 mm. I know other amateurs that have seen Sirius B in 150-200 mm telescopes, but mostly at lower latitudes. However, by seeing Sirius B at intervals separated by decades, I have observed its polar angle change.

I believe the separation of Sirius B is now over 10 arcsec, and still increasing slightly. So for the next couple of decades, observing it might be a bit easier. In recent winters I have tried with telescopes from a 120 mm refractor to a 250 mm Dobsonian, and occasionally larger, but still have not seen it for several years. This Hubble photo of Sirius gives some idea why Sirius B is hard to observe in small telescopes.

Also, many eclipsing binaries are often observed, and their light curves measured. By analyzing light curves, orbital elements can be estimated. However, these indirect orbital observations are probably stretching the intent of the original question.

The most obvious visual multiple system, where orbital changes can be observed is Alpha Cen A+B, (together with Proxima Centauri). The A/B system has an orbital period of 80 years, but because it is so close (1.34 parsec), the semi-major axis is a whopping 17.5 arcsecond.

The two stars are currently separated by 5 arcseconds on the sky. This will increase to around 10 arcseconds by 2030, decrease to about 2.5 arcseconds in 2037 and then increase again to about 22 arcseconds over the course of the next 15 years, with a changing relative angle all the time. The progress of this could easily be followed with binoculars or a small telescope. 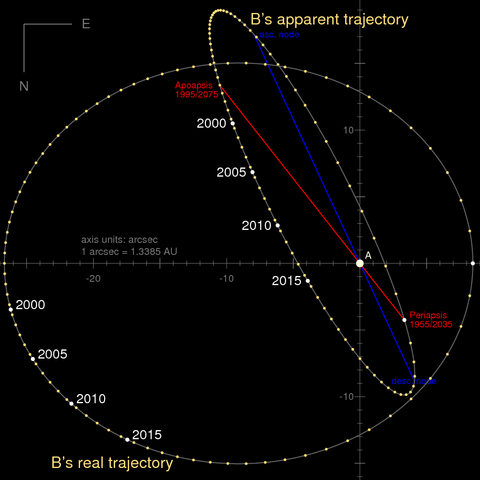 Trajectory of Alpha Centauri B relative to A (fixed to the coordinate origin) as seen from the Earth (inclined ellipse) and face-on (horizontal ellipse). The orbit parameters are taken from Pourbaix et al. (2002). The graph has been created with gnuplot based on data generated by solving Kepler's equation.

You could try Sirius B, which is a white dwarf orbiting Sirius A around their common centre of mass. Sirius is one of the closest stars to Earth, and Sirius B has a 50 year orbital period. At maximum separation the white dwarf is about 30 AU from Sirius A, which should allow you to separate them with a good amateur telescope, but I'm not sure where Sirius B is right now. There should be a detectable change in position within 5 years or less. Needless to say, Sirius is a very btight star, and its companion rather faint, so you won't be able to separate them when they are close together.

Zeta Ursae Majoris is a binary star system in the Big Dipper constellation that is visible to naked eye. In fact, the ability to resolve Mizar and Alcor is taken as a test of good eye sight.

Interestingly, in the Hindu marriage tradition, immediately after the marriage the couple are asked to look at this binary star system (Alcor is called Arundhathi) as a sign of fidelity.

Not the answer you're looking for? Browse other questions tagged observational-astronomy amateur-observing binary-star .

21
Can you see something active in the sky apart from satellites? Can there be amateur time-domain astronomy?
11
Perceiving movement of stars
6
What's the difference between a Newtonian telescope and a regular telescope
4
Did the night sky ever change in recorded history?
1
What are some of the best astronomy gatherings in the USA?

19
How many stars can stay close to each other without collapsing?
18
Affordable night sky photography
6
What percentage of visual stars are actually binary stars?
1
What kinds of stars would it be possible to observe in M31 with a small amateur telescope?
1
Can Two Stars of One Same Type Orbit Each Other?
4
Second Telescope: Maksutov Cassegrain vs Refractor
4
Any simple experiment with an H-alpha telescope?
2
Will the Magdalena Ridge Optical Interferometer be able to image extended objects like the surface of the Moon?
5
How to use an app to help find deep sky objects in general, either attached to a telescope as a finder scope or held on hand?