How do radio astronomers avoid having their receivers burned out by ground-imaging radar from satellites?

After about 34:00 in the 9th press conference of AAS 235, radio astronomer and NRAO's spectrum manager Harvey Liszt talks about Radio Astronomy in a New Era of Radio Communication and says:

This is a new development that we’re going to have to come to grips with. There is a band allocated between 9.2 and 10.4 GHz (this is roughly an order of magnitude lower than you saw for CloutSat) and these are being developed commercially now, and if you look on the right you’ll see ICEYE. ICEYE’s slogan is “Every square meter, Every hour”.

A synthetic aperture radar like this, if pointed at a radio telescope when the telescope is pointed in its direction will burn out the radio astronomy receiver.

As a matter of fact, some of these radars are so strong that even the ground scatter (the albedo of the ground is about 10%) and even the backscatter from radar will burn out a radio astronomy receiver.

One of the radar constellation companies named by Dr Liszt as posing a potential problem is Finland's Iceye.

The firm's CEO, Rafal Modrzewski, said his team took its responsibilities seriously, and that it continued to investigate any potential risks Iceye's technology might pose to the global space community, both in orbit and on the ground.

"Most importantly in this topic, Iceye complies with international regulation regarding our allocated bands," he told BBC News.

"Mitigating any potential or perceived risks to sensors on ground can additionally be done proactively by tracking applicable SAR satellite orbits to avoid clashes with instrumentation, and in the case of Iceye, by also working with us if there are any remaining concerns."

At the recent American Astronomical Society meeting in Hawaii, Dr Harvey Liszt from the US National Radio Astronomy Observatory raised the concern that powerful radar pulses from orbit could damage the radio receivers that scientists employ in their ground observatories.

(Capella's CEO) Payam Banazadeh told me Capella was taking this matter very seriously and was keen to co-ordinate his company's activities with the AAS.

"We have also been in contact with Dr Liszt and are actively working to safeguard their mission when operating our SAR constellation.

"Whether it is observing Earth or deep space, Capella believes in exploration and scientific discovery. We also believe in and support protecting the mission of the radio astronomy community."

Question: How do radio astronomers avoid having their receivers burned out by ground-imaging radar from satellites? 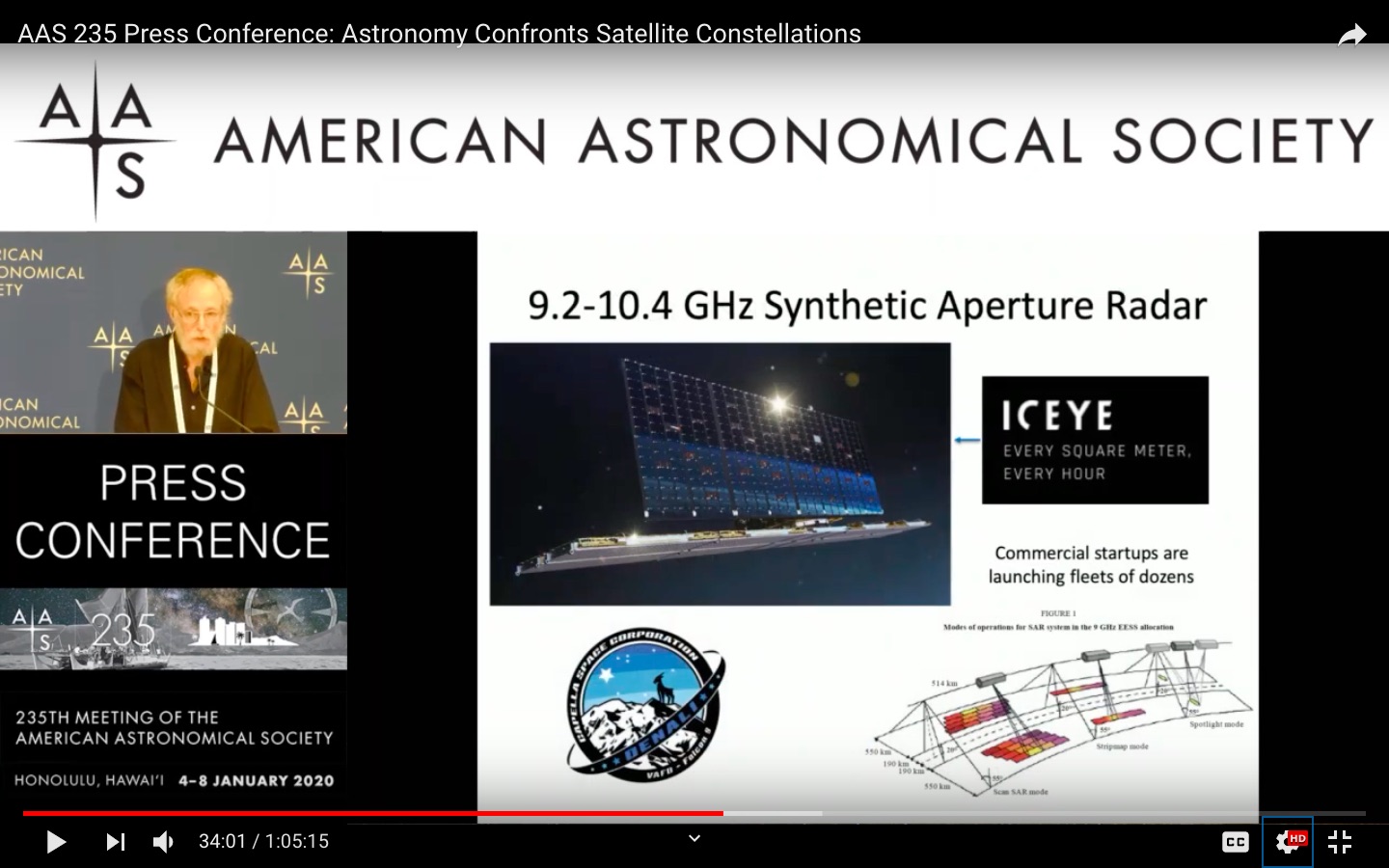 There are a number of approaches to avoid the impact of radio frequency (RF) emitters in radio astronomy. This interference can impact performance even if it is not at level that is significant to cause damage. In the end they all come down to trade offs between sensitivity and robustness in the presence of interference.

Spectrum Allocation
The first means of protection is simply to avoid observing in at the same frequencies that other systems use to transmit. A number of frequency bands are reserved for radio astronomy use and other systems are to avoid operating in these bands. These allocations can differ by geographical region and between terrestrial and satellite platforms. For the band mentioned in the question, 9.2-10.4 GHz, there is no allocation for radio astronomy, so you would have to deal with whatever interference may be present. (Gory details for the US can be found in FCC Online Table of Frequency Allocations.)

The International Telecommunications Union (ITU) publishes a large number of recommendations related to protecting radio astronomy. These include (not a complete list):

Filtering
The next best thing to do is provide RF filtering to reject signals that are outside of the band being studied. These filters introduce loss that results in some desensitization. Current state of the art is probably high temperature superconducting (HTS) filters. The can archive particularly low loss levels, for example less than 0.1 dB in L-band (1.40 - 1.72 GHz).

An example of a radio astronomy receiver incorporating filtering for RF interference rejection can be found in High Performance Receiver for RFI Mitigation in Radio Astronomy: Application at Decameter Wavelengths.

Receiver Limiting
To prevent receiver damage from excessive input signals, particularly in-band, where filtering would be ineffective, an RF power limiter may be employed. One type of limiter, the PIN limiter diode, as described in PIN Limiter Diodes in Receiver Protectors:

For those interested, a receiver architecture incorporating such listing can be found in Electronics Division Internal Report No, 113 3-Element Interferometer 3,7, 11, and 21 cm Receivers. This document describes one of the receivers used at the National Radio Astronomy Observatory at Green Bank, West Virginia. I have reproduced part of one of the block diagrams below highlighting the receiver limiting.

Processing Algorithms
A final approach is to use digital processing algorithms to ignore data that has been subject to radio frequency interference (RFI):

Not the answer you're looking for? Browse other questions tagged observational-astronomy radio-astronomy artificial-satellite instruments .

2
How do astronomers at SETI know if they received intelligent radio signals from other planets?
5
How do observational astronomers manage streaks and other artifacts from objects in Earth Orbit?
3
How do astronomers convert radio signals received by their antenna to images?
7
Is there any work underway to push the long baseline capabilities of the Event Horizon Telescope to sub-millimeter wavelengths?
5
Do stars have "radio photospheres"? Are they different from their optical photospheres?
3
How can we install a radar on radio telescopes like FAST or GMRT?